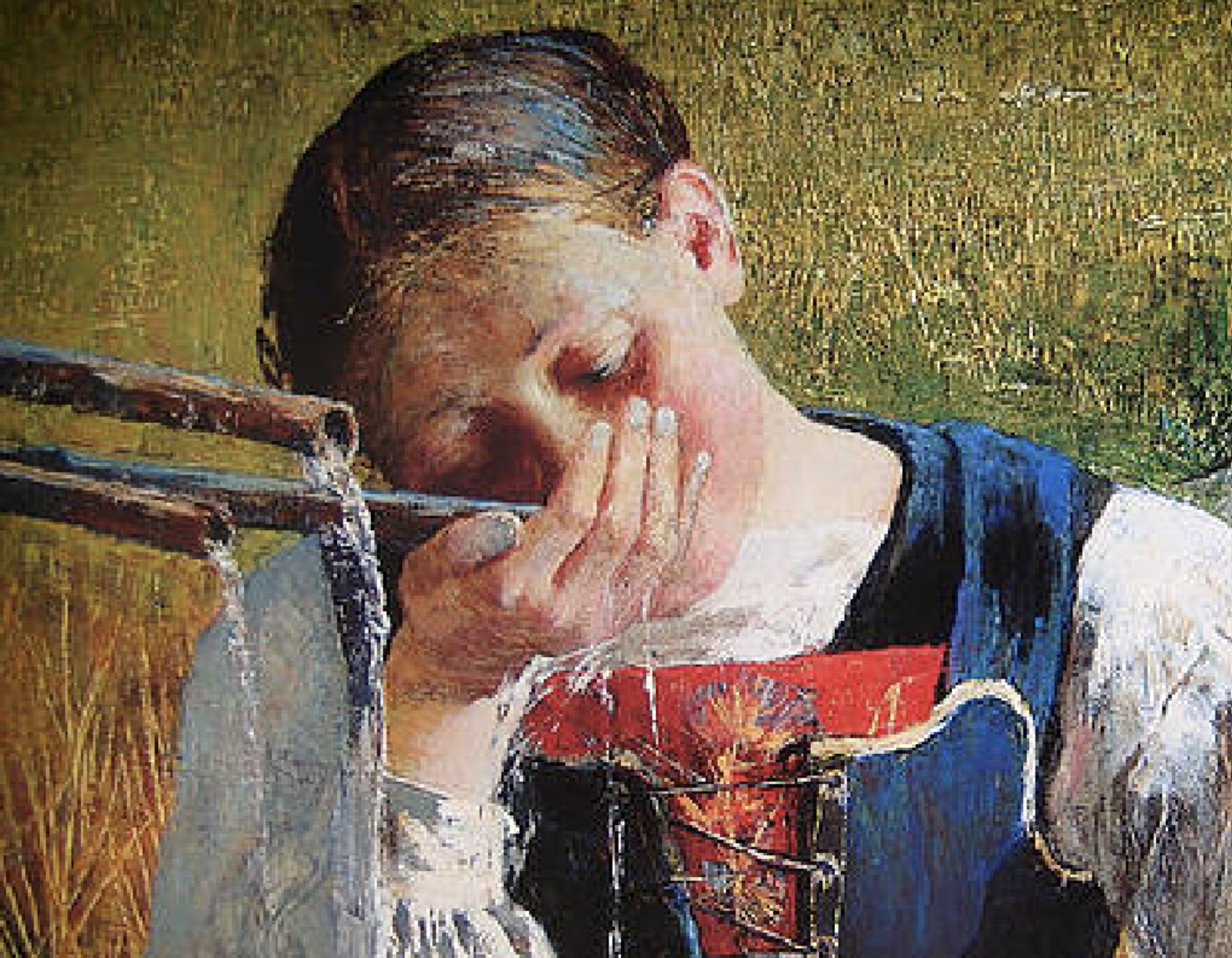 The last two years of the pandemic, political discord, and constant ambiguity about the future brought home how much I want things that can disappear—like security, communal harmony, and knowing whether or not I’ll be able to visit my kids who live abroad. Dostoevsky’s Grand Inquisitor in The Brothers Karamazov accuses Christ of misunderstanding human nature because our desire for the freedom found in Christ pales in comparison to our desire for other things, especially for what Jesus rejected in the wilderness: food and full bellies, grandiose miracles offering proof for our weak faith, and worldly power and control.

So this Christmas, after an uncomfortable analysis of my own strongly held desires, I know I’m right there with the rest of humanity wanting other things more than I want Jesus. Stable futures for my children, travel plans without question marks looming over them, grandiose miracles (a sudden end to Covid would be nice), and yes, a sense of pre-2020 control—I probably long for all these with more intensity than I do for the Christ child currently nesting in my various nativity set mangers.

But it’s also true that I don’t want to want other things more than Him anymore. Several Christian writers, along with some General Conference talks, have helped me cultivate this healthier inclination with stories that revived memories of times I didn’t get what I wanted. Most of the time, I later thanked God for the gift of ignorant desires traumatically and blessedly destroyed.

“God will only give you what you would have asked for if you knew everything He knows,” writes theologian Timothy Keller from his purview of success-obsessed Manhattan, where New York magazine claims “Tim Keller wants to save your yuppie soul.” Keller’s books tell cautionary stories about those who got what they wanted most and became more miserable than ever. His writing also offers up anecdotes like the two actors Keller knew both vying for a lead role on Broadway. Neither got the part, but the one who put God first dealt with the disappointment, went into another profession, and found meaning elsewhere. The other, whose love of acting superseded all else, lapsed into persistent despair and substance abuse.

“Most stories of genies, lamps, and wishes illustrate that our desires are discordantly arranged and fatally unwise,” Keller warns on his Twitter feed. “Even when we have good intentions, the results fail.” Elder Jeffrey R. Holland points out in his 2021 talk “The Greatest Possession,” that the Rich Young Man’s discordant desire goes beyond wealth and symbolizes any other thing we want above the kingdom of God. Elder Holland then goes on to collapse several germane CS Lewis metaphors in illustrating what God actually wants from us: entire trees, not just branches; entire teeth, not just fixed crowns; and entire selves, not just time or money. In return, explains Lewis, God says, “I will give you a new self instead. In fact, I will give you Myself.”

Wanting Him, however, along with the new self that comes with Him, isn’t for the faint of heart. Back in the 80s, what I wanted consisted of a successful publishing career, so I moved east where, back in the pre-internet Pleistocene era, all opportunities lay. I freelanced while unemployed, attended church, and prayed fervently for an editorial position. Then, a grandiose miracle occurred. I found myself one of two final candidates for an ideal job at a prestigious magazine. I pictured myself financially secure, editing manuscripts in the publication’s cozy, rarefied offices while sipping cocoa.

I wanted that job so badly my teeth hurt but did not suspect that what God wanted was to save my yuppie soul. Much to my despair, the other actor got the part and I ended up working in the textbook department of a large, impersonal corporation where, other than making a few good friends, I was miserable.

More on that story later. Elder Brent Nielson recast in 2021 a New Testament story into themes of wanting and desire. The resourceful group who tore apart a roof to lower their friend to Jesus wanted a physical healing. Instead, Jesus first forgave the man’s sins or, as Elder Nielson put it, healed the man’s soul. Just as a younger Brent Nielson, he explained, had wanted only physical healing for his father’s cancer, the paralytic and his friends craved the ability to walk more than interior salvation.

But while the man lowered through the roof ended up with both a spiritual and physical healing, the Nielson father died, a blow that took several years for the son to understand. Wanting only what he wanted, instead of what God wanted, Elder Nielson explains, “I failed to see the miracle that had occurred”—family resilience and a father “spiritually healed as he sought and received the blessing available because of the Savior’s Atonement.”

Back in the 80s, I did not want spiritual healing and kept praying for a better job. To my horror, though, I kept getting strong promptings to serve a mission—definitely not on my list after moving across the country for a publishing program that cost my savings and for a job that would make it worth it. But in an act of uncharacteristic faith, I went on the mission I didn’t want. In the process, my old life died and a better one emerged that led to different priorities, a family, joy, and when I first got back from Brazil, a Church magazine job replete with cocoa, manuscripts, and a purpose I would have wanted earlier if I’d known everything that God knows.

Still, new desires continually arise and I lapse with disappointing frequency into wanting them until an author like Donald Miller motivates me to want Jesus more than a secure and easy life. In A Million Miles in a Thousand Years: How I Learned to Live a Better Story, Miller explains that a good story involves a character who wants something and is willing to undergo conflict for it. However, the story is only as good as what the character wants, with character growth evolving through intense conflict in pursuing that desire. The better the desire, the greater the conflict. The greater the conflict, the greater the character development.

But who wants character development? We love all that growth and conflict in books and movies, but not in real life. Day to day, we want easy, uninspiring stories, the kind Miller describes in his introduction to A Million Miles, in which a character saves enough money for a Volvo, checks the window wipers and AC on a test drive, then contentedly drives off the lot with his new purchase.

Yes, the pandemic revealed I want a Volvo life—not of cars, but of security, comfort, and blessings instead of Mount Mordors to climb. I want the gifts more than a Giver who’s going to pull out my rotten tooth, uproot my rotted tree, and, worst of all, develop my character. But wise Christians like the medieval authors of The Imitation of Christ offer this insight, still potent five centuries later, for cautious believers like me:

It’s hard not to value the gifts—those tangible benefits social scientists write about in academic articles that correlate religious observance with everything from quicker recovery from illness to greater family cohesion to lower blood pressure—more than the Giver Himself. But if I’m in it for the blessings the gospel proffers, I’m no different than followers who sought out Jesus only because, as the Lord said, “ye did eat of the loaves, and were filled.”

Some Dostoevsky readers find the Grand Inquisitor’s arguments against Christ too compelling and they “also go away.” Maybe Jesus does expect way too much of us mere mortals who crave loaves of bread over the word of God, miracles over the still, small voice, and a worldly ruler telling us what to do over the One who gives us free will. But security, miracle, and power are transitory. Like the servants in Isaiah who “eat, but ye shall be hungry” and “drink, but ye shall be thirsty,” we get what we want and then only want more of it, or something different altogether.

Conversely, those who drink Jesus’s living water, He explained, never thirst, and those who eat the Bread of Life never go hungry. They may have to relinquish a right arm, an eye, an ambition, or other possessions; Timothy Keller points out that Joseph gave up his reputation by marrying a pregnant Mary, then gave up home and security fleeing to Egypt. But as Malcolm Muggeridge once wrote about fame, success, pleasure, and fulfillment (and Elder Dallin Oaks amplified in 1993), “multiply these tiny triumphs by a million, add them together, and they are nothing—less than nothing, a positive impediment—measured against one draught of that living water Christ offers to the spiritually thirsty.”

I’ve tasted the living water, emerged more whole with each loss, and may not want the character development that encountering Christ entails, but do trust Him more and more as my perniciously relentless desires die their slow deaths. As I listen to “Jesu, Joy of Man’s Desiring” this Christmas and its expression of intense desire for the almighty, I want to want Jesus and agree with yuppie-saving Pastor Keller that “you don’t know Jesus is all you need until Jesus is all you have.”

Speaking of gifts, thank you for this thought provoking article that rings so true to those stumbling along the path to exaltation. The vision you share and the honesty in which you reveal yourself gives us seekers of Jesus some additional light. Love your sense of humor, your mind, and your heart. Your words have touched my soul.

I really really like this. I have found it to be oh so true in my life. Thank you for sharing.