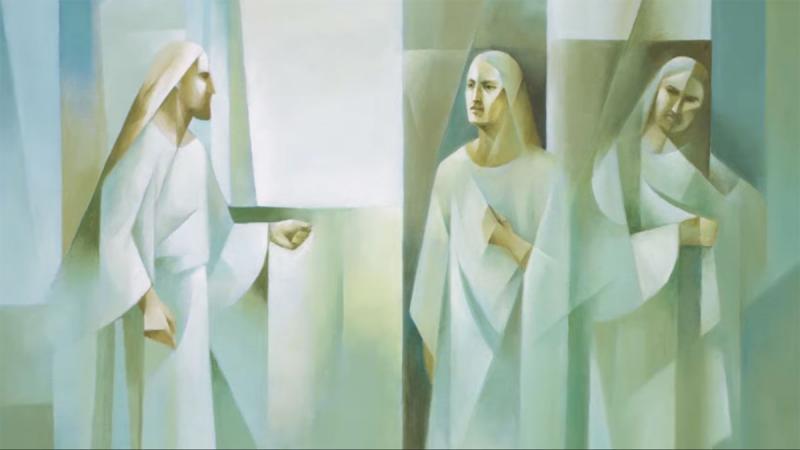 VIDEO: The Parable of the Two Sons will change your perspective on the Premortal Council

Cover image: The Parable of the Two Sons by Jorge Cocco.

As Jesus’ time as the mortal Messiah drew to a close and his time as the final Passover Lamb rapidly approached, he taught more emphatically and lost all sense of pretense and patience with those who challenged him. Any need to be careful of what he said was now gone. He knew what he was here to do; he had come to Jerusalem at this Passover to die.

It is interesting then to note his actions during the first few days of his last mortal week. First, he arranged to enter Jerusalem in the fashion prophesied of the long-awaited Messiah-King, upon the back of a donkey. Throngs of people saw, understood the implication, and heralded his arrival, cheering “hosanna” and lining his way into the city with clothing and palm leaves. He had clearly proclaimed his purpose, and hundreds, if not thousands of people saw.

Jesus then made his way to the temple, the very center of Jewish life, especially at Passover. Seeing the filth and degradation of the House of God, he cleansed it, turning over tables and casting out merchants and moneychangers that made a mockery of his Father’s house.

In addition to his triumphal entry and his taking charge of the temple, he also went about and healed the sick and afflicted. In a short time, his presence in Jerusalem was all-encompassing, and he made no effort to veil his role as the Son of God.

Some of the highest religious and legal rulers in Judaism at that time saw and heard of Jesus’ works. They had long grown anxious that he would seize their power and destroy life as they knew it. Determined that Jesus be stopped, they approached him and demanded that he explain by what authority he did these things.

As usual, Jesus had some questions of his own. “Where did John the Baptist get his authority? Was it from heaven, or of men?” When the leaders declined to respond one way or the other, knowing he would be able to use their answer against them, Jesus answered for them in the form of a parable. He said,

“What think ye? A certain man had two sons; and he came to the first, and said, Son, go work [today] in my vineyard. He answered and said, I will not: but afterward he repented and went.

“And he came to the second and said likewise. And he answered and said I go sir: and went not.

“Whether of them twain did the will of the father?”

The religious leaders could not resist the easy answer and said that it was, of course, the first. Catching them in their hypocrisy, Jesus said to them, “verily I say unto you, that the publicans and the harlots go into the kingdom of God before you.”

Without understanding the culture of the time and the Greek-to-English translation of this encounter, this parable and Jesus’ interpretation of it for the Jewish leadership may seem, at the very least, confusing.

First, it helps to see the parable as Jesus intended it: as a metaphor of the Premortal Council. In the parable, the Father, who is God, asks His two sons to go down into the vineyard, or the world, and work for Him. In this, Jesus cast himself as the first son. This becomes clearer as we go back to the original Greek text. In the King James Version of the Bible, the response of the first son to his father’s request to go and work is translated as “I will not,” which sounds rebellious. But the Greek word translated as “will” in English is more to do with the concept of desire and would be better rendered as “I will it not” or “it is not my will to do so.”

Jesus taught on many occasions that he came not to do his own will, but the will of his Father. In this context, we can see how the first son in the parable is, in fact, Jesus, and therefore the second son is naturally Satan, the one who said he would go and work for the Father, but ultimately turned away and did not what was asked.

Because of the Jewish leaders’ thorough understanding of the concept of Heavenly Councils, once Jesus reminded them that this was about recognizing authority, they probably would have understood the implications of this parable and recognized Jesus’ claim as the First Son of the Father. He taught them that they knew the signs given of those in authority and chose to ignore them for their own selfish reasons.

Maybe, in this light, they too were like the second son, promising to do the work of the Father, but ultimately lying and abandoning the work, leaving it to the First Son to do alone. We too should ask ourselves where we stand? Will we be like the First Son, and faithfully join in the work of the Father, even though it is difficult and not our will? Will we be humble, and reconcile ourselves with the Father? Or will we be like the second son and only pretend to be willing before our Father, but turn from Him in the end?

The Parables of Jesus can be purchased at Latter-day Saint bookstores, or online at Amazon.com. Neither the authors, nor the artist are collecting royalties for this volume. Instead, they are being donated to four non-profit organizations, including Book of Mormon Central. The others are the BYU New Testament Commentary, BYU Studies, and Alliance of Covenant Artists (a coalition of Latter-day Saint artists).

Nola, did not Jesus ask to "have this cup pass....."? Asking to be excused from this very heavy responsibility? And then, "not my will, but thine".

Have we ever felt unwilling to do a good thing, yet went and did? I think the parable says it's OK to be at first unwilling, and then walk the walk, rather than talk the talk and fade. Jesus did not want to drink of the bitter cup, as we very often do not wish to do, BUT He did walk the walk, and set the example for us all.

How A Simple Styrofoam Cooler Changed a Family and a Village

The Gift of Community

In Joint Op-Ed, President Nelson and NAACP Leaders Look to Solutions for Racism

By Maurine Proctor
PAST ISSUES