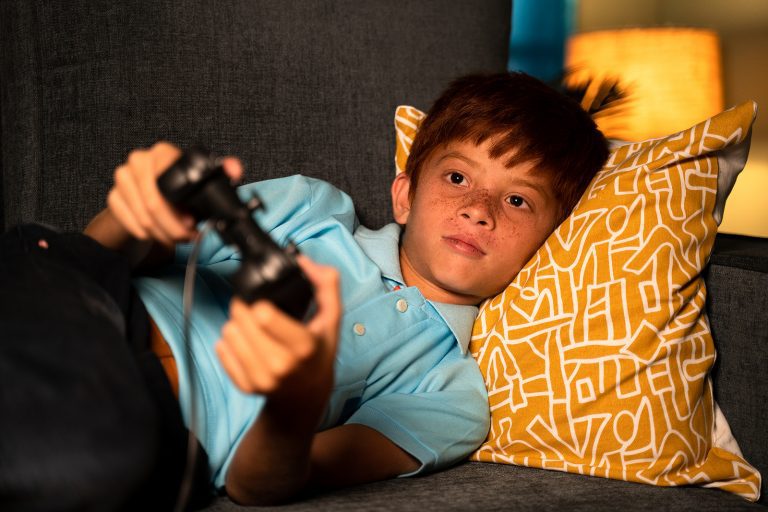 In 1992, David* received his first video game system. His parents, like many others, were unaware of the potentially damaging effects of the emerging technology. David played his video game as much as he liked, with no limits. Fast forward 28 years and David is a 34-year-old man, but he has the emotional and social development of a 12-16-year-old. He has never lived on his own, has never held onto the same job longer than 18 months, and has never had close friendships or a romantic relationship. What happened? Gaming Addiction happened.

It is estimated that worldwide in 2020 8.4% of children were addicted to video gaming.  In 2019, South Korea declared gaming addiction a public health crisis with over 600,000 of its children classified as addicts. The University of Hong Kong surveyed the gaming habits of students from wealthy families in Hong Kong primary schools in 2017. The survey revealed that male students spent between 11-21 hours a week playing video games.

What is gaming addiction?

Gamers truly enjoy gaming just as golfers truly love to golf. But there is a difference when an activity impacts a person’s ability to function in other areas of his life. The World Health Organization (WHO) included video gaming in the list of behavioral addictions in 2018, with Internet Gaming Disorder defined as a condition with specific criteria for diagnosis. An affected gamer must show signs of repetitive use over 12 months and meet at least five of the listed criteria, such as, obsession over the games, withdrawal symptoms when not playing, and an excessive need to play even after experiencing negative consequences such as loss of relationships and terminated employment.

Gaming addiction is identified as a “process addiction,” a compulsion that develops when an activity stimulates specific areas of the brain producing a dopamine release. Dopamine is called the “happy hormone,” and our brain releases it when we experience pleasurable activities. Gamers experience a dopamine release when playing video games and seek to repeat those pleasurable sensations with extended game playing. For this reason, that 30 minutes on a Saturday can easily turn into multiple hours every day of the week.

The “Diagnostic and Statistical manual of Mental Disorders” (DSM-5), the diagnostic tool used by mental health professions, recognizes gaming disorder as a behavioral addiction and not substance abuse such as alcohol or tobacco. But whether the disorder is a substance or behavioral addiction, the effect is the same. Obsessive video and internet gaming are taking a toll on individuals and families worldwide.

In 1999 children played video games for an average of 26 minutes a day. A  2014 study found that average playtime had increased to 1 hour a day on weekdays and at least 1.5 hours a day on weekends. The same study also found that children that game spend 30% less time reading and 34% less time on homework compared to non-gamers.

The Covid-19 pandemic has had a profound impact on video game usage. During the pandemic, David has played video games for 6-8 hours a day on weekdays and up to 16 hours a day on weekends. He sacrifices sleep and food so he can play non-stop. He’s not alone. Beginning in March 2020, online gamers played on average 5 hours a day. This is a 30% increase from pre-Covid times. At the same time top online and console game companies saw a significant increase in sales of individual games and online streaming services. Microsoft had a 130% increase in multiplayer games just in March and April of 2020.

Dr. Victoria Dunckley, a pediatric psychiatrist and expert in screen time addiction, explains how quickly a child can become dependent on video games. In her book, “How to Reset Your Child’s Brain,” she describes how a child’s developing brain is susceptible to video game addiction. She points out that the brain’s gray matter shrinks with hours of play. Dunckley also makes a connection between the marketing practices of the tobacco industry and video game creators, targeting younger audiences despite the evidence of negative effects.

To be fair, research does indicate that video gaming can benefit visual and motor skills. According to experts in the field, it may be too early to label gaming as a fully negative activity.  Not every gamer shows destructive and addictive behavior, just as not every person who drinks alcohol is an alcoholic. So, what do we do to make sure video gaming is a healthy pastime and not a pathway to addiction? There are several ways families can regulate the use of video games:

The American Academy of Child and Adolescent Psychiatry  age-based recommendations on screen time (this includes all smartphones, tablets, gaming consoles, TVs, and computers) are as follows:

If you suspect your child is addicted to video games, or are an addicted gamer yourself, there are resources available. Healthy Gamer is an online resource for those that have labeled themselves as addicts or have been diagnosed as such. The founder, Dr. Alok Kanojia, was a former gaming addict. He became a psychiatrist and felt the field of psychiatry did not meet the needs of the modern-day gamer. “The first issue is that many psychiatrists are not as effective as we thought. The average age of a psychiatrist is 55 years old. Most of them do not understand many of our generation’s issues, such as video game addiction, social media, FOMO [fear of missing out], etc.” Healthy Gamer’s mission is to merge the gap between online game life and reality, envisioning a world where all gamers can have a choice to enjoy gaming while also living a functional and fulfilling life.

Resources like these provide an avenue of hope for individuals that have developed a gaming addiction and invaluable guidance for parents. During his acceptance address, 1921 Nobel Prize winner Christian Lange said, “Technology is a useful servant but a dangerous master.” When it comes to video games, that is absolutely the case. Make sure entertainment technology is a useful servant for your family and not a dangerous master.

*Name has been changed.

Chelsea is an intern from Brigham Young University-Idaho and is pursuing the Marriage and Families Studies degree. She has been married for six years and is the mother of four including 18-month triplets. Chelsea enjoys reading parenting and marriage books while applying all she learns from her studies in her family life. She is excited to join the front lines of advocating the five pillars UFI stands on and defends!

Very good article and information! Thank you for sharing this I have always felt it was a dangerous addiction that anyone can get hooked on. I have intentionally chosen not to play video games because I have seen how addictive it can become.

Thank you for approaching this subject and for the link to find help for video game addicts. Very informative article.