“Undaunted”: See the Docudrama that Tells the Rest of the Story Behind the Witnesses of the Book of Mormon | Meridian Magazine 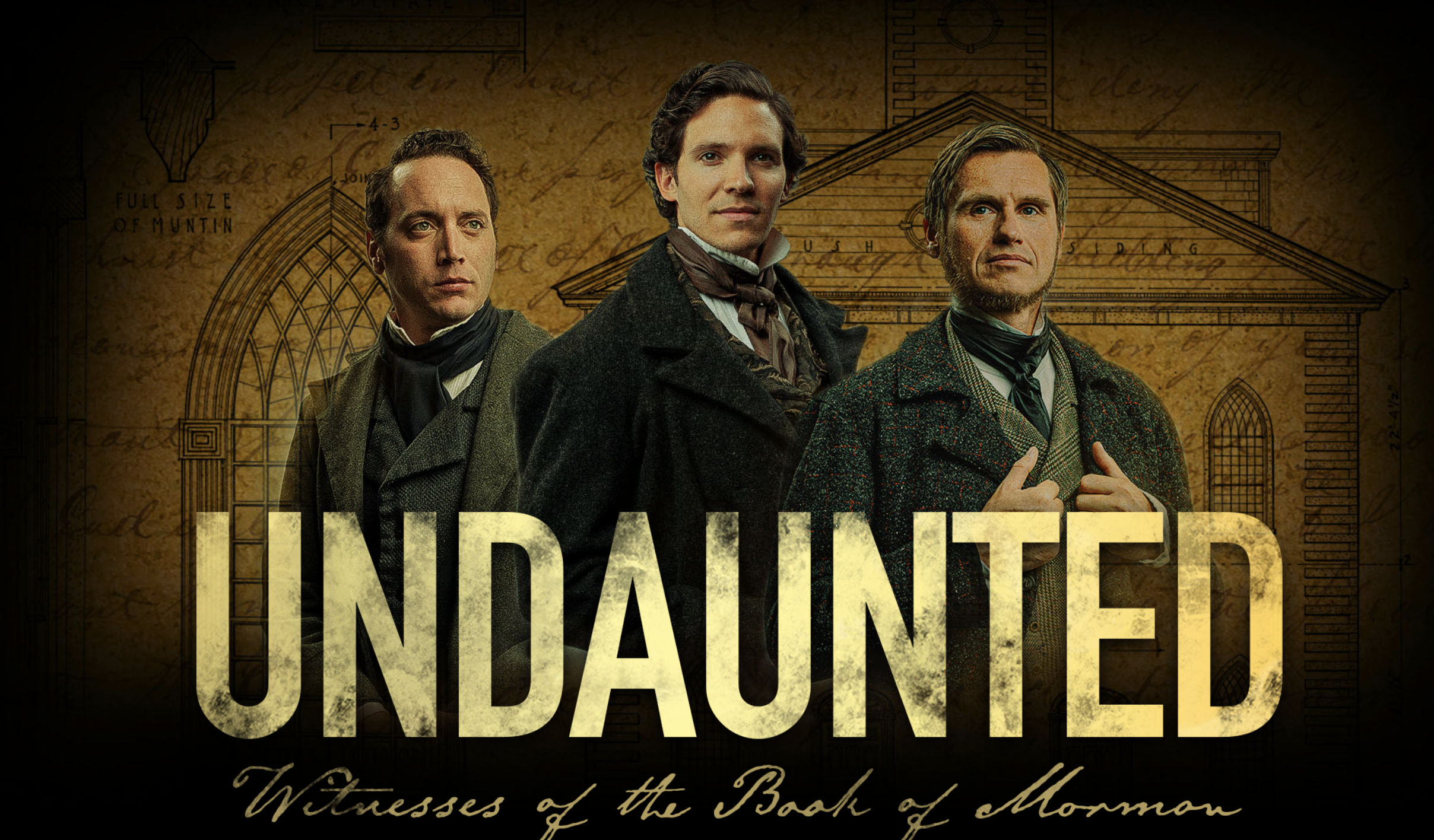 “Undaunted”: See the Docudrama that Tells the Rest of the Story Behind the Witnesses of the Book of Mormon

I expect that at least some of you have seen the Interpreter Foundation’s 2021 dramatic film, “Witnesses.”  I certainly hope so.

We created it as a means of making the story of the witnesses to the Book of Mormon more familiar to members of the Church of Jesus Christ of Latter-day Saints and, we hope, eventually even to non-members.  In my view, they represent a remarkable and very strong challenge to any who wish to dismiss the claims of the Book of Mormon and the Restoration.  They cannot simply be brushed aside as either conspirators or crazy people; their sincerity and sanity are well supported in abundant historical documentation.  And they—and the objectively physical objects to which they bear record (to say nothing of their encounters with an angel and their hearing the voice of God) make it impossible to write Joseph Smith’s claims off as merely the product of mental illness or imagination or simple lying.

“Witnesses” screened in theaters across the United States last year, but many people who (I think) would have enjoyed it (and perhaps even benefited from it) didn’t have the opportunity to do that.  And, despite our best efforts, a surprising number never so much as heard of it.  But all is not lost!  “Witnesses” is now available both in DVD and Blu-ray formats (from Deseret Book).  It can also be streamed (through Deseret Video+ and Living Scriptures):

Happily, I also anticipate that “Witnesses” will have a reasonably long useful life.  But we never understood the theatrical film to be the whole of the overall Witnesses film project.  In fact, our original idea was to do a documentary or “docudrama”; the notion of a dramatic movie came later, suggested (if I recall correctly) by the Latter-day Saint filmmaker Mitch Davis, who eventually provided us with its initial script.  And that docudrama—which we’ve titled “Undaunted: Witnesses of the Book of Mormon” —is now finished:

“Undaunted” is divided into two parts that, altogether, total slightly less than 2.5 hours in length.  It will appear in DVD form on 24 May 2022, complete with subtitles in Spanish, Portuguese, and French —and then, at some point thereafter that we haven’t yet determined, it will be available for streaming.  We want it to reach the widest possible audience.

In a sense, this new docudrama is a sequel to the dramatic movie.  But it’s also an expansion and a commentary on that earlier film.  Our ambition was for “Witnesses” to bring the Three Witnesses—Oliver Cowdery, Martin Harris, and David Whitmer—once more to the attention of members of the Church of Jesus Christ of Latter-day Saints, to increase member understanding and appreciation of them.  Our hope was to refresh memories and to kindle a conversation.  And “Undaunted” is designed to further that conversation and to inform it.

Even some members of the Church have wondered whether the experience of the Witnesses was merely subjective.  Did they only imagine that they saw the plates?  Did they ever claim to have literally touched those plates or any of the other miraculous artifacts associated with the finding, translation, and dictation of the Book of Mormon?  If they really believed, why did almost all of them leave the Church?  Did any of them ever return?  Were they just credulous, superstitious backwoods bumpkins?

The overall “Witnesses” film project seeks to provide a broad audience with reliable answers to those and other important questions.

How does ”Undaunted” differ from “Witnesses”?  Unlike the dramatic film that was shown in theaters, the new docudrama broadens our coverage beyond just the Three Witnesses.  (Telling a complex story that extends over more than ten years and that, including Joseph Smith himself, centrally involves four protagonists was already a difficult challenge.  We decided that we couldn’t make the narrative even more complex, introducing even more characters.)  “Undaunted” brings the story and the testimony of the Eight Witnesses in, as well.   Moreover, beyond them, it introduces its viewers to several of the informal or unofficial witnesses of the very tangible objects involved in the recovery of the Book of Mormon (for example, Mary Musselman Whitmer, Josiah Stowell, and Lucy Mack Smith).  Besides scenes drawn from the original “Witnesses,” it also features new segments that have been created especially for the docudrama itself.

Another feature of “Undaunted” is its inclusion of interviews and expert commentary, including noted Latter-day Saint scholars such as Richard Lyman Bushman, Susan Easton Black, Steven Harper, and Terryl Givens.  It also features the prominent non-member scholars John Turner, of Virginia’s George Mason University, and Ann Taves, a former president of the American Academy of Religion and a Distinguished Professor Emerita of Religious Studies at the University of California, Santa Barbara.  In addition, a retired federal prosecutor and a retired federal judge offer their perspectives on the importance of eyewitness testimony in the courtroom and, specifically, on the credibility of the Book of Mormon witnesses.  Further, an experienced metallurgist and metal worker who has created facsimiles of the Book of Mormon plates for the Church—and who, in fact, made the replica plates that were used in “Witnesses”—describes the challenge posed by any attempt to manufacture such plates as props for a fraud.  (Spoiler:  Joseph Smith almost certainly couldn’t have done it.)

Were the eleven official witnesses of the Book of Mormon—twelve if you include Joseph Smith himself—reliable? What about the unofficial witnesses who interacted with the plates in various ways—including a number of women? Were the plates actually made of gold? How could witnesses really see an angel and hear the voice of God, yet come to doubt His prophet?

A further part of the overall Witnesses project that is now coming to fruition has been the production of short features that we’re calling “reels.”  Ranging in length from between roughly eight minutes to perhaps twelve or fifteen, they also include interviews with scholars (such as Gerrit Dirkmaat, Royal Skousen, and Jeffrey Mark Bradshaw), along with dramatized scenes taken from both the feature film, “Witnesses,” and the docudrama, “Undaunted.”  The first of them went up already on 23 April 2022.  And they will continue to appear each week—every Saturday, online and without charge—for the next four or five months or so.  (Even shorter versions of them will appear on TikTok, Instagram, and Facebook.)

In the end, there will be somewhat more than twenty of these short features.  They will treat such specific topics as Sidney Rigdon, early Latter-day Saint plural marriage, the Spalding Manuscript as a commonly proposed non-divine source for the Book of Mormon, James Jesse Strang and his “Voree plates,” the Kirtland apostasy, what we can learn from studying the earliest Book of Mormon manuscripts, and a cognitive scientist’s view of eyewitness testimony.

We hope to reach a wide audience with our “reels”—especially, perhaps, among younger people—and we’re seeking your help to do so.  Please take a look at them yourself.  Then, if you think it appropriate, we ask you to share them with as many others as possible:

Finally, an important component of the overall “Witnesses” effort is a website, still growing, that is devoted to “Witnesses of the Book of Mormon.”  Although it is being created as a support to the film projects, we see it as being independently valuable and important in and of itself (even to those who, through bad luck or sheer wickedness) never see the films:

In order to avoid possible confusion, because I really don’t want anybody to get the wrong idea on this subject, I feel that I need to add that I’m not using this column to advertise anything that will benefit me financially.  That needs to be clearly understood.  The Interpreter Foundation is a non-profit 501(c)3 charitable foundation under the tax laws of the United States, and I earn nothing whatever from it.  I also earn nothing from these film projects; whether they’re viewed by five hundred people or five hundred million people will make absolutely no financial difference at all to me or to anybody else involved.  While I’m on the topic of finances, however, I should mention that we hope to generate enough of a financial return—somewhat in the manner of the nineteenth-century Perpetual Emigration Fund or the contemporary Perpetual Education Fund—that we’ll be able to do more filmmaking in the future.

In fact, we’ve already selected and announced our next project, which we’re calling “Six Days in August.”  You can learn about “Six Days in August” at the project’s new website:  https://sixdaysinaugust.com/.  We would welcome your help to make this project a reality.