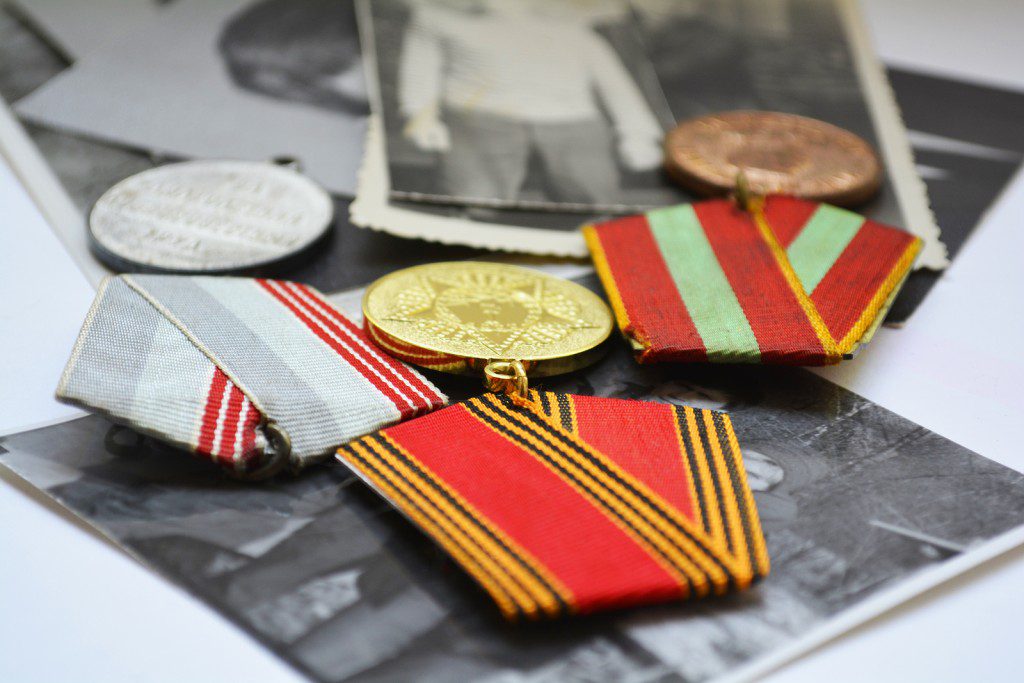 In celebration of this Memorial Day, in which we have the opportunity to remember the sacrifices of those who have fought and died for our freedom, here are some vivid accounts of war and important lessons we can learn from them. Each account comes from a General Conference address. May we show our gratitude for those who fought for us by the way we choose to live.

The Lesson of Responsibility to Others
President Henry B. Eyring

Almost all of us have seen a battlefield portrayed in a film or read the description in a story. Over the din of explosions and the shouts of soldiers, there comes a cry, “Man down!”

When that cry sounds, faithful fellow soldiers will move toward the sound. Another soldier or a medic will ignore danger and move to the injured comrade. And the man down will know that help will come. Whatever the risk, someone will run low or crawl to get there in time to protect and give aid. That is true in every band of men joined in a difficult and dangerous mission which they are determined to fulfill at any sacrifice. The histories of such groups are full of stories of those loyal men who were determined that no man would be left behind.

Here is one instance from an official account.1 During fighting in Somalia in October of 1993, two United States Army Rangers in a helicopter during the firefight learned that two other helicopters near them had fallen to the earth. The two rangers, in their relative safety aloft, learned by radio that no ground forces were available to rescue one of the downed aircrews. Growing numbers of the enemy were closing in on the crash site.

The two men watching from above volunteered to go down to the ground (the words they used on the radio were to “be inserted”) to protect their critically wounded comrades. Their request was denied because the situation was so dangerous. They asked a second time. Permission was again denied. Only after their third request were they put down on the ground.

Armed only with their personal weapons, they fought their way to the crashed helicopter and the injured fliers. They moved through intense small arms fire as enemies converged on the crash site. They pulled the wounded from the wreckage. They put themselves in a perimeter around the wounded, placing themselves in the most dangerous positions. They protected their comrades until their ammunition was depleted and they were fatally wounded. Their bravery and their sacrifice saved the life of a pilot who would have been lost.

They were each awarded posthumously the Medal of Honor, their nation’s highest recognition for bravery in the face of an armed enemy. The citation reads that what they did was “above and beyond the call of duty.”

But I wonder if they saw it that way as they moved to the downed airmen. Out of loyalty they felt a duty to stand by their fellow soldiers, whatever the cost. The courage to act and their selfless service came from feeling that they were responsible for the lives, the happiness, and the safety of comrades.

Such a feeling of responsibility for others is at the heart of faithful priesthood service. Our comrades are being wounded in the spiritual conflict around us. So are the people we are called to serve and protect from harm. Spiritual wounds are not easily visible, except with inspired eyes.

From a talk given by President Henry B. Eyring in April 2009 entitled “Man Down!” Click here to read the full address.

From December 11 to 13, 1862, the Union forces attacked Marye’s Heights, a large hill overlooking the town of Fredericksburg, Virginia, where six thousand Rebels awaited them. The Southern troops were in secure defensive positions behind a stone wall which meandered along the foot of the hill. In addition, they stood four deep on a sunken road behind the wall, out of sight of Union forces.

The Union troops—over forty thousand strong—launched a series of suicidal attacks across open ground. They were mowed down by a scythe of shot; none got closer than forty yards from the stone wall.

Soon the ground in front of the Confederate positions was littered with hundreds, then thousands, of fallen Union soldiers in their blue uniforms—over twelve thousand before sunset. Crying for help, the wounded lay in the bitter cold throughout that terrible night.

The next day, a Sunday, dawned cold and foggy. As the morning fog lifted, the agonized cries of the wounded could still be heard. Finally, a young Confederate soldier, a nineteen-year-old sergeant, had had all he could take. The young man’s name was Richard Rowland Kirkland. To his commanding officer, Kirkland exclaimed, “All night and all day I have heard those poor people crying for water, and I can stand it no longer. I … ask permission to go and give them water.” His request was initially denied on the grounds that it was too dangerous. Finally, however, permission was granted, and soon thousands of amazed men on both sides saw the young soldier, with several canteens draped around his neck, climb over the wall and walk to the nearest wounded Union soldier. He raised the stricken man’s head, gently gave him a drink, and covered him with his own overcoat. Then he moved to the next of the wounded—and the next and the next. As Kirkland’s purpose became clear, fresh cries of “Water, water, for God’s sake water” arose all over the field.

The Union soldiers were at first too surprised to shoot. Soon they began to cheer the young Southerner as they saw what he was doing. For more than an hour and a half, Sergeant Kirkland continued his work of mercy.

Tragically, Richard Kirkland was himself killed a few months later at the battle of Chicamauga. His last words to his companions were, “Save yourselves, and tell my pa I died right.”

Kirkland’s Christlike compassion made his name synonymous with mercy for a post–Civil War generation, both North and South. He became known by soldiers on both sides of the conflict as “the angel of Marye’s Heights.” His loving errand of mercy is commemorated by a bronze monument which stands today in front of the stone wall at Fredericksburg. It depicts Sergeant Kirkland lifting the head of a wounded Union soldier to give him a drink of refreshing water. A tablet to Kirkland’s honor hangs in the Episcopal church in Gettysburg, Pennsylvania. With simple eloquence, it captures the essence of the young soldier’s mission of mercy. It reads: “A hero of benevolence, at the risk of his own life, he gave his enemy drink at Fredericksburg.”1

From a talk by President Thomas S. Monson given in April 1995 entitled “Mercy—The Divine Gift.” Click here to read the full address.

The Lesson of Forgiveness When it Seems Impossible
Brother Keith B. McMullin

This is a troubled world. Discord and disaster are everywhere. It sometimes feels as though mankind itself may be hanging in the balance.

Foreshadowing our day, the Lord said, “The heavens shall shake, and also the earth; and great tribulations shall be among the children of men, but my people will I preserve.”1 We should take great comfort in this promise.

Though disasters completely disrupt “the even tenor of [our ways],”2they do not have to leave our lives forever shattered. They can “stir [us] up in remembrance,”3 “awaken [us] to a sense of [our] duty to God,”4and keep us “in the path of [our] duty.”5

In Holland during World War II, the Casper ten Boom family used their home as a hiding place for those hunted by the Nazis. This was their way of living out their Christian faith. Four members of the family lost their lives for providing this refuge. Corrie ten Boom and her sister Betsie spent horrific months in the infamous Ravensbrück concentration camp. Betsie died there—Corrie survived.

In Ravensbrück, Corrie and Betsie learned that God helps us to forgive. Following the war, Corrie was determined to share this message. On one occasion, she had just spoken to a group of people in Germany suffering from the ravages of war. Her message was “God forgives.” It was then that Corrie ten Boom’s faithfulness brought forth its blessing.

A man approached her. She recognized him as one of the cruelest guards in the camp. “You mentioned Ravensbrück in your talk,” he said. “I was a guard there. … But since that time, … I have become a Christian.” He explained that he had sought God’s forgiveness for the cruel things he had done. He extended his hand and asked, “Will you forgive me?”

“It could not have been many seconds that he stood there—hand held out—but to me it seemed hours as I wrestled with the most difficult thing I had ever had to do.

“… The message that God forgives has a … condition: that we forgive those who have injured us. …

“… Woodenly, mechanically, I thrust my hand into the one stretched out to me. As I did, an incredible thing took place. The current started in my shoulder, raced down my arm, sprang into our joined hands. And then this healing warmth seemed to flood my whole being, bringing tears to my eyes.

“For a long moment we grasped each other’s hands, the former guard and the former prisoner. I had never known God’s love so intensely, as I did then.”6

From a talk given by Brother Keith B. McMullin from April 2010 entitled “Our Path of Duty”. Click here to read the full address.