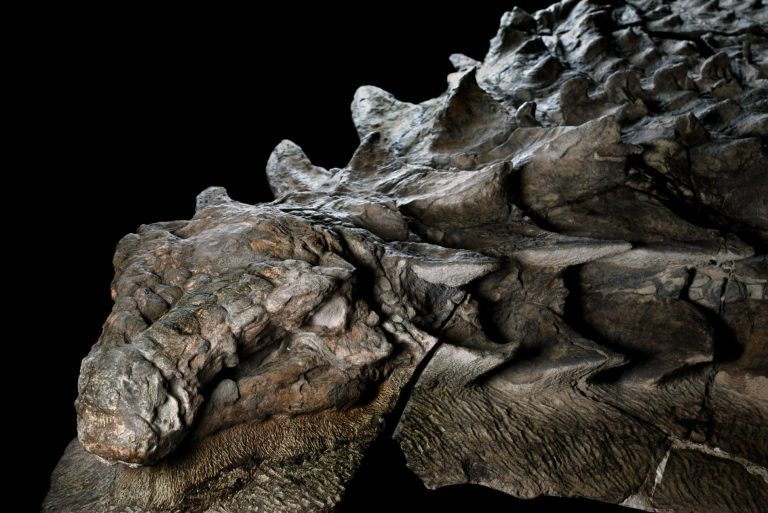 This is the Best Dinosaur Fossil of its Kind Ever Found

The following was written by Michael Greshko for National Geographic. To read the full article, click here.

On the afternoon of March 21, 2011, a heavy-equipment operator named Shawn Funk was carving his way through the earth, unaware that he would soon meet a dragon.

That Monday had started like any other at the Millennium Mine, a vast pit some 17 miles north of Fort McMurray, Alberta, operated by energy company Suncor. Hour after hour Funk’s towering excavator gobbled its way down to sands laced with bitumen—the transmogrified remains of marine plants and creatures that lived and died more than 110 million years ago. It was the only ancient life he regularly saw. In 12 years of digging he had stumbled across fossilized wood and the occasional petrified tree stump, but never the remains of an animal—and certainly no dinosaurs.

But around 1:30, Funk’s bucket clipped something much harder than the surrounding rock. Oddly colored lumps tumbled out of the till, sliding down onto the bank below. Within minutes Funk and his supervisor, Mike Gratton, began puzzling over the walnut brown rocks. Were they strips of fossilized wood, or were they ribs? And then they turned over one of the lumps and revealed a bizarre pattern: row after row of sandy brown disks, each ringed in gunmetal gray stone.

“Right away, Mike was like, ‘We gotta get this checked out,’ ” Funk said in a 2011 interview. “It was definitely nothing we had ever seen before.”

Nearly six years later, I’m visiting the fossil prep lab at the Royal Tyrrell Museum in the windswept badlands of Alberta. The cavernous warehouse swells with the hum of ventilation and the buzz of technicians scraping rock from bone with needle-tipped tools resembling miniature jackhammers. But my focus rests on a 2,500-pound mass of stone in the corner.

At first glance the reassembled gray blocks look like a nine-foot-long sculpture of a dinosaur. A bony mosaic of armor coats its neck and back, and gray circles outline individual scales. Its neck gracefully curves to the left, as if reaching toward some tasty plant. But this is no lifelike sculpture. It’s an actual dinosaur, petrified from the snout to the hips.

The more I look at it, the more mind-boggling it becomes. Fossilized remnants of skin still cover the bumpy armor plates dotting the animal’s skull. Its right forefoot lies by its side, its five digits splayed upward. I can count the scales on its sole. Caleb Brown, a postdoctoral researcher at the museum, grins at my astonishment. “We don’t just have a skeleton,” he tells me later. “We have a dinosaur as it would have been.”

To read the full article on National Geographic, click here.

It appears that some people have formed an opinion without actually reading the article. Or understanding of paleontology is equal to zero. The layers of earth that were dug through to find this fossil were not laid down in a few years.The fossil was encased in a VERY thick shell of stone. Also not something that happens over a few years. To John Csanki: You are expressing yourself about something you have no information, knowledge, education or training about. And relying your opinion on a book, written thousands of years after tha fact by people who had no information, knowledge, education or training about fossils, dinosaurs, or animals in general. Good luck with that.

I am honestly bemused by some of the comments here .people are of course entitled to their opinion ,but what is that makes some Latter Day Saints believe they mus hold to a fundamentalist evangelical Christian,view of the age of the earth .latter day Saint leaders since the last century have made it clear that the church has no official view on geological age or evolution ,though a number of general authorities have strongly supported the scientific consensus on both subjects as some have famously opposed it . the official position of the church since the early 1900s is definitely not that of fundamentalist Christianity .we have some very fine, faithful scientists working in most of the relevant disciplines ( eg.paleo botany ,paleontology ,evolutionary biology ,genetics ,etc and so on ).as I say bemused .what a wonderful story what a very exciting find .my son and I were delighted by the pictures and article