There is More to Know About Isaac | Meridian Magazine 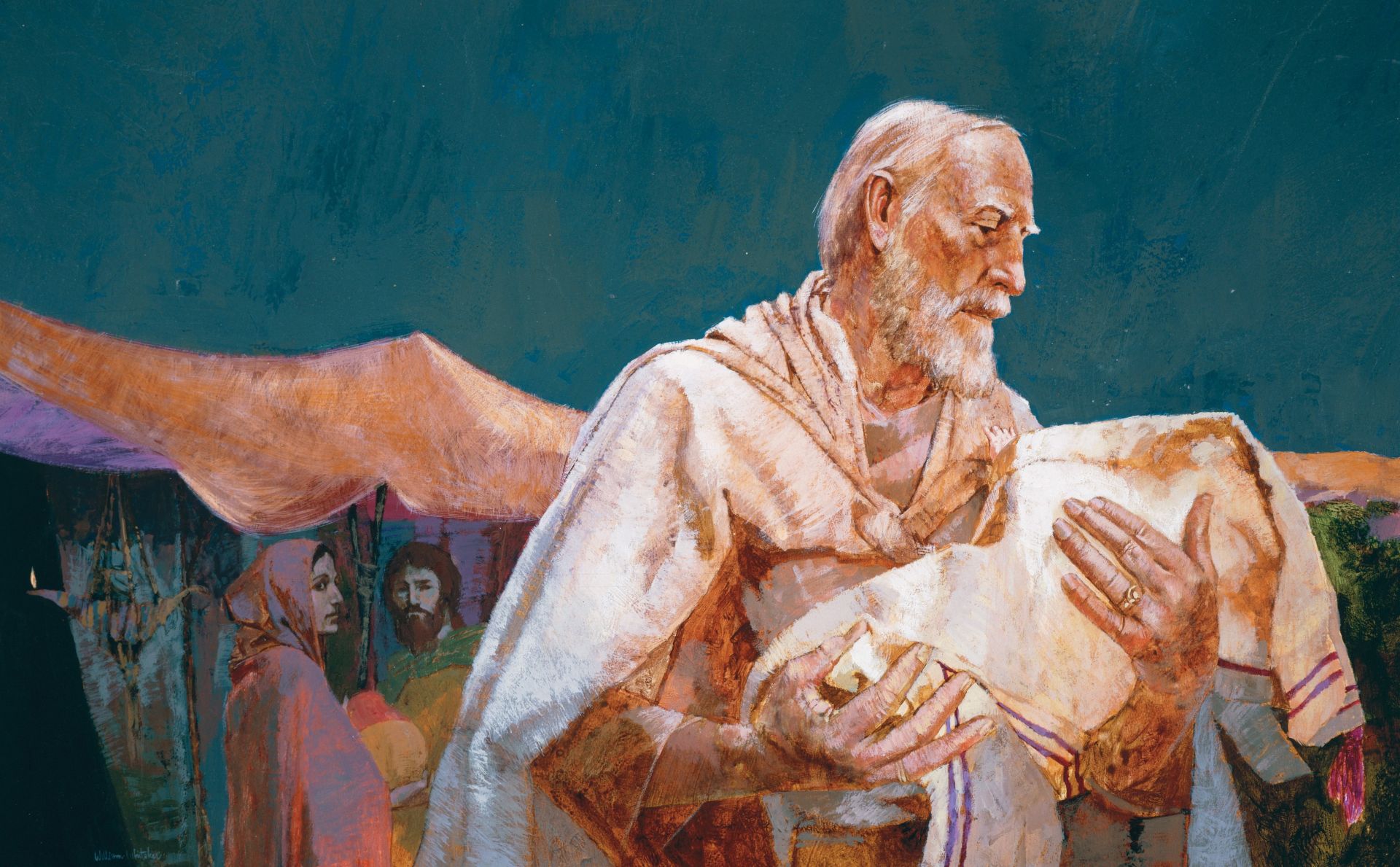 There is More to Know About Isaac

“Abraham, Isaac, and Jacob.”  The three names roll off our tongues so quickly together, rather like “Peter, James, and John,” that we scarcely distinguish them.  They function as if they were a kind of unit.  But they’re not.  Abraham and Isaac and Jacob were quite distinct persons and personalities and, of the three, it’s Isaac who tends to get lost.

We know and think and talk a great deal about the towering figure of Abraham, the “friend of God” (Isaiah 41:8; 2 Chronicles 20:7; James 2:23; Qur’an 4:125), revered by Jews, Christians, and Muslims alike.  And Jacob, who also earned the name “Israel,” is remembered as the father of a people who took that name, as well as in the names of an ancient kingdom and a modern nation-state.

But Isaac?  To a degree, he’s almost a placeholder between two giants—son of one and father to the next.

Even the stories for which Isaac is known tend to involve other people at least as much as himself.  Sometimes, he’s not so much the protagonist of the story as one of the supporting characters.  One, for example, concerns his miraculous, divinely-announced birth to Sarah and Abraham in their advanced old age (Genesis 18, 21).  Here, it is Abraham’s faithfulness, and Sarah’s, that figures front and center.

Another involves his near sacrifice on Mount Moriah, which is recounted in Genesis 22.  The “binding of Isaac,” as it is sometimes called, is plainly a similitude of the future sacrifice of God’s own son.  And, perhaps even more plainly, the substitution as the sacrificial victim of the ram caught in a nearby thicket foreshadows Christ’s atoning sacrifice on our behalf.  But the story also provides a dramatic illustration of Abraham’s committed faithfulness to the Lord.  And God blesses Abraham for his willingness to offer up the son for whom he had waited so long:

“By myself have I sworn, saith the Lord, for because thou hast done this thing, and hast not withheld thy son, thine only son: that in blessing I will bless thee, and in multiplying I will multiply thy seed as the stars of the heaven, and as the sand which is upon the sea shore; and thy seed shall possess the gate of his enemies; and in thy seed shall all the nations of the earth be blessed; because thou hast obeyed my voice.”  (Genesis 22:16-18)

In one famous story (told in Genesis 24), Isaac marries a kinswoman, Rebekah, Abraham’s grandniece.  He does so at the insistence of his father, Abraham, and with the help and careful supervision of Abraham’s servant, whom later commentators identified as Eliezer of Damascus.  This marriage within Abraham’s kin group may be seen, from a Latter-day Saint standpoint, as equivalent to marriage with a fellow believer in the true God and, thus, to marriage within the covenant.  It is essential to the fulfillment of God’s promise to Abraham for his posterity: Rebekah, we are told, will eventually be “the mother of thousands of millions” (Genesis 24:60)

Of course, Isaac did have remarkable spiritual experiences of his own.  One of them is recounted in Genesis 26.  Even here, though, it is Abraham who seems to be the star.  Speaking of Isaac, the biblical text records that

“the Lord appeared unto him, and said, Go not down into Egypt; dwell in the land which I shall tell thee of:  Sojourn in this land, and I will be with thee, and will bless thee; for unto thee, and unto thy seed, I will give all these countries, and I will perform the oath which I sware unto Abraham thy father; and I will make thy seed to multiply as the stars of heaven, and will give unto thy seed all these countries; and in thy seed shall all the nations of the earth be blessed; because that Abraham obeyed my voice, and kept my charge, my commandments, my statutes, and my laws.”  (Genesis 26:2-5)

The early verses of Genesis 25 describe the final acts of Abraham’s life and record his death.  Isaac is now the patriarch.  His decisions are now his own.  And here, in the very same chapter, he stumbles.  Of his two sons Esau and Jacob, he prefers Esau, the unworthy elder boy.  Genesis 27 recounts how his wife Rebekah intervenes with a ruse by which Isaac’s blessing—fittingly enough, he is now blind— is given to the better younger son against his will.  Once again, someone else is steering Isaac in the right direction.  And, when the time comes for Jacob to choose a wife, it is at Rebekah’s urging that Isaac instructs his son to marry within their extended family in order to receive “the blessing of Abraham” (see Genesis 27:46; 28:1-5).

Isaac continues alive through the final verses of Genesis 35.  Strikingly, though, he scarcely figures in Genesis 27-35.  Instead, even while Isaac lives, it is his son Jacob who figures as the principal actor in the biblical narrative.

So should we look down upon Isaac?  Not at all.  Jewish rabbinic tradition holds that Isaac was thirty-seven years old at the time of his near-sacrifice, and that he willingly submitted to what both he and his father, Abraham, believed to be the will of God.  Certainly the biblical account depicts him as old enough to travel away from his mother for several days and strong enough to carry the wood for the burnt offering.  (See Genesis 22:4, 6.)  Such considerations suggest that Isaac was both faithful and courageous.

But perhaps we should also see in Isaac a figure with whom we can much more readily identify than with his titanic father, Abraham, and his famous son, Jacob or Israel.

During the October 1972 General Conference of the Church of Jesus Christ of Latter-day Saints, Elder A. Theodore Tuttle (1919-1986), who was then a member of the First Council of the Seventy, delivered a memorable address based upon Genesis 26:26 and inspired by none other than the patriarch Isaac:

“And he builded an altar there, and called upon the name of the Lord, and pitched his tent there: and there Isaac’s servants digged a well.”

“Altar, tent, and well,” Elder Tuttle repeated, stressing those three words.  “Isaac did not become an Abraham or a Jacob. He did not reach the heights of Abraham, called the “father of the faithful.” Nor was he as impressive as his son Israel, father of the twelve tribes. Yet Isaac is loved and revered. He worshiped God, cared for his home, and pursued his work. He is remembered simply as a man of peace. The eloquent simplicity of his life and his unique ability to lend importance to the commonplace made him great.

“Altar, tent, and well: his worship, his home, his work. These basic things of life signified his relationship to God, his family, and his fellowmen. Every person on earth is touched by these three.”

In this sense, Isaac is a biblical role model for Everyman, including those of us, ordinary folks, who sometimes need a little help to make the right choices.  We may never appear in global history books, but the divine counsel given in Doctrine and Covenants 64:33 applies just as well and surely to us as it did to Isaac, dwelling in his tent with his small family and his flocks at the edge of the barren Negev Desert: “Wherefore, be not weary in well-doing, for ye are laying the foundation of a great work.”

We are called to pass down the spiritual legacy that we have received, just as Abraham’s son Isaac was.  Still today, devout Jews refer to him as “Isaac, our forefather.”

Elder Tuttle continued:  “How little things have changed since Isaac’s day—the things that really matter. There is the same God of Abraham, Isaac, and Jacob, the same family roles to fill, the same need to work.

“Altar, tent, and well: these things are essential. Placed in proper perspective by God’s revealed word, they provide at once our greatest challenge and achievement.”

We need to get the balance right, or to keep trying to do so, just as much in 2022 as Isaac did, centuries before the birth of Christ.

Few of us will become world historical figures.  Most of us muddle along, making some very good decisions (often owing to the help and guidance of those around us) and some bad ones.  Sometimes we’re saved by others around us from the worst consequences of our bad decisions.  We intend to be good, but we falter more often than we would like.  We make resolutions to be better, and we often break them.  We find it difficult to balance all of the demands on our time, attention, and energy.

As with Isaac, though, the Lord blesses us, and he stands ready to bless us with unimaginably good things, beyond our wildest dreams.  Isaac led a fairly simple life.  He never ruled an empire.  Still, he is forever associated not only with the names of Abraham and Jacob, of Abraham and Israel, but with the divine promises made to them.   And so are we.  The blessings of the priesthood are now available to all who will receive them, both men and women.  And, if they receive those blessings, they

A. Theodore Tuttle’s 1972 conference talk “Altar, Tent, Well,” can be read and viewed at https://www.churchofjesuschrist.org/study/general-conference/1972/10/altar-tent-well?lang=eng.

I'm glad that you mentioned Isaac's age at the time of the sacrifice, although Josephus gives it as 25. In either case, when people tell the story they always mention the faith of Abraham but neglect the faith of Isaac. He was not a child as he is often depicted to be. He was an adult who could have refused to go along with it. According to Josephus, after Abraham explained the situation, "So he went immediately to the alter to be sacrificed." Abraham's faith was great, but Isaac's faith may have been even greater.

I never realized how little we read of him. It is comforting to know that our “smaller” lives are no less honorable than the “greater” ones around us.