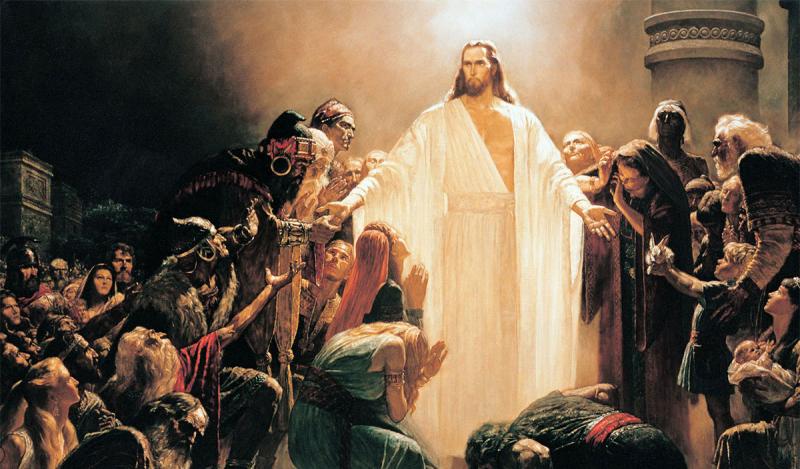 View the article on Book of Mormon Central. Cover Image: The Risen Lord by Arnold Friberg.

The good news that Jesus is risen from the dead is a message of light and joy for a dark and weary world. The testimony of New Testament witnesses confirms that he He lives and because He lives we may also have eternal life if we will follow Him. He was seen of Mary at the tomb, and angels declared His resurrection to other righteous women of faith (Mark 16:1–7; Luke 24:1–10; John 20:11–18). He was seen by Peter, James, Thomas and the apostles and other disciples who saw, spoke, ate with Him and touched the wounds in His hands, feet and side (Luke 24:13–43; John 20:19–31). As John testified, “That which was from the beginning, which we have heard, which we have seen with our eyes, which we have looked upon, and our hands have handled, of the Word of life” (1 John 1:1). Peter testified, “For we have not followed cunningly devised fables, when we made known unto you the power and coming of Jesus Christ, but were eyewitnesses of his majesty” (2 Peter 1:16).

In addition to the testimony of New Testament disciples, the Book of Mormon tells of the appearance of the resurrected Jesus to a multitude in the Americas. There Jesus appeared to a multitude of 2500 men, women, and children who were invited to come forth and touch His resurrected body. “And it came to pass that the multitude went forth, and thrust their hands into his side, and did feel the prints of the nails in his hands and in his feet; and this they did do, going forth one by one until they had all gone forth, and did see with their eyes and did feel with their hands, and did know of a surety and did bear record, that it was he, of whom it was written by the prophets, that should come” (3 Nephi 11:15).

Those who study, history, law, and many other branches of knowledge rely upon records, documents, and texts to interpret, judge, measure, and understand significant events and activities. Professor S. Kent Brown has observed that the resurrected Jesus, the Word of God, represents what is for us the most central and important event in the history of mankind:

Jesus himself is the text because he bears in his body the proof of the atonement. And his body, of course, is the first thing he allows people access to—to touch the scars in his hand and his feet and his side. But when one thinks about ancient texts that are inscribed on stone, clay tablets, metal, wood, eventually papyri, which is a softer, more perishable material. Each one of those kinds of surfaces can be destroyed, but the resurrected, glorified body of Jesus cannot. And it bears, as it were, witness of itself, and it carries, in its own way, the text of his suffering and death and resurrection. In a concrete way, the immediate and eternal text is the Risen Jesus, bearing in his body marks that will never go away.1

As a sacred record the Book of Mormon is a type which points toward to the divine work of Jesus Christ our Redeemer. The Lord told the prophet Enoch, “Truth will I send forth out of the earth, to bear testimony of mine Only Begotten; his resurrection from the dead; yea, and also the resurrection of all men” (Moses 7:62). The Book of Mormon text was brought forth from the dust. Seen and handled by chosen witnesses who like those of old bear witness of its truth and message. Today, a record of a fallen people, once buried in the ground, has comes forth before the world, like the resurrected Jesus, from the earth through the gift and power of God for the salvation and glory of all who will receive it.