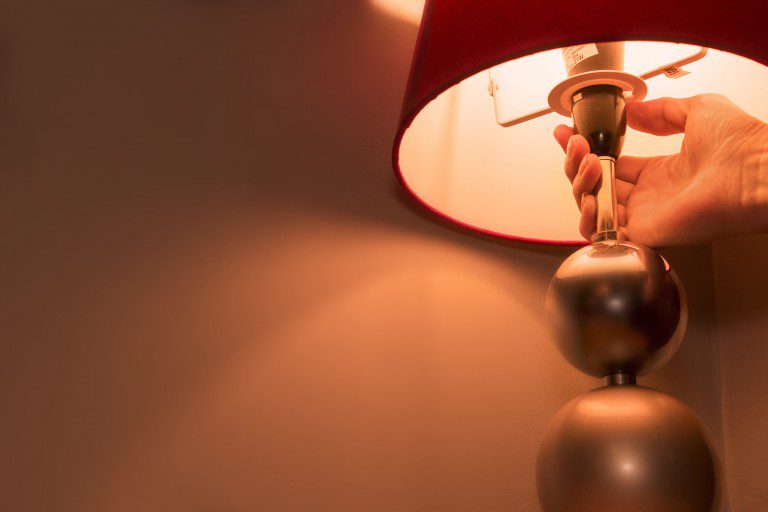 My daughter, Heather came out of her room all bleary-eyed one morning.

“What happened to you?” I asked.

“How would that make you so tired?”

“It freaked me out all night,” she replied. “It would turn on by itself. I would reach over and turn it off, and then a while later it would turn on again. I finally decided I didn’t care, so I just left it on, but then it would turn itself off. I tried to ignore it, but the turning on and off about every half hour or so was kind of spooky.”

“I’m surprised it has gone bad so fast,” I said. “It’s practically new.”

She shrugged, half asleep. “Whatever. All I know is it kept me awake most of the night. And if it’s not the lamp’s fault, I’m not sure I want to know what it is.”

I consider myself a fairly decent electrician, so I took the lamp apart to look at it. I couldn’t find any short or anything that seemed wrong. I took it down and set it in the living room by my chair. Anytime I was near it; I would touch it. If it was on it turned off, and if it was off, it turned on. It never seemed to do anything on its own. I figured it was just a fluke.

We put the lamp back in Heather’s room, but the next morning she complained about the same thing happening. She said either it was moved out or she did. I decided to try it in my room. I turned it off for the night, and never once did it turn on by itself.

We tried it in her room again, but the next morning she was sleeping on the couch and complained about the same thing happening. I read everything I could find about touch lamps and could find nothing that indicated the kind of problem we were having. I hated to get rid of it since it was so new, but I didn’t know what else to do.

I decided I was going to get to the bottom of it, so I went in and sat on her bed. As I sat there, I heard the familiar buzzing sound that is so annoying when a person is trying to sleep. It was the sound of a fly. It sounded like a really big one. I considered getting up and getting a fly swatter when I thought of something else.

I realized it was attracted to the night light by Heather’s bed. That night light was right next to her lamp. I wondered if the answer could be what I was thinking. I waited, and momentarily the light turned on. I looked at the lamp, and the fly was sitting on it. I continued to watch the fly. Eventually, it flew away. I could hear it buzzing around. It landed somewhere. I continued to listen, and it started buzzing again. Eventually, I could see it coming back, and it landed on the lamp. The lamp instantly shut off.

I got up off of the bed and turned on the main light. I chased the fly from the room with a fly swatter and moved the night light over by the desk, so if there were ever a fly again, it would be attracted in that direction. That night, when Heather came home, I told her I had found her ghost.

When I told her what it was, she looked at me suspiciously.

But the ghost never came back, and the lamp was saved from a trip to the second-hand store.