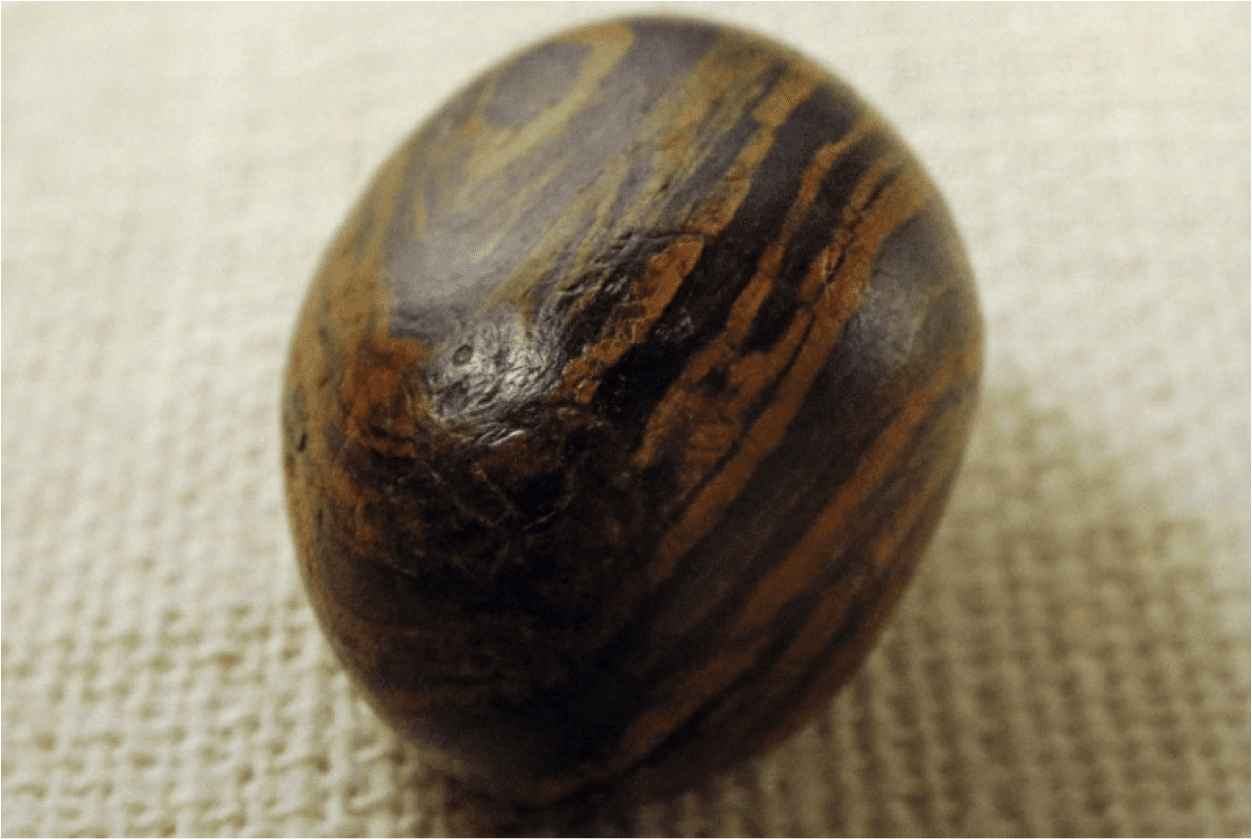 There have been a flurry of articles over the last 2 1/2 years regarding the translation process of the Book of Mormon, and in particular the use of “seer stones”.

Photos of the seer stone in the new volume of the Joseph Smith Papers. Photo by Scott G Winterton, Deseret News.

Numerous articles have been written on the topic, and I will not attempt to duplicate those efforts.

What I would like to share are just a few things that I haven’t seen published, which some may find quite fascinating.

When I get curious about something, I sometimes like to go down deep to the foundations and see what they’re built upon. Then I can work my way up to the details. For Joseph’s brown seer stone, that means geology. As soon as I saw the pictures, I wanted to know what kind of stone it was. I didn’t know if I would find any answers, but I decided to make a little effort to do so.

So I called around.

The first rock shop I could get to answer the phone was one in southern Utah. I asked if they had a tenured geologist there that could identify a stone for me. “I haven’t worked here that long,” the guy who answered the phone said, “but I’m a geologist and I can probably help you.”

“Sounds good,” I said. “I’m not sure if you guys have seen anything about this ‘seer stone’ picture that the LDS Church just released, but I was wondering if from the picture you could tell me what kind of stone it is, or anything about it.”

“OH YEAH!” he said. “In fact, we’ve been waiting for someone to call, because it’s actually pretty cool. You’re the first one.” Suffice it to say, he had my attention.

The first thing he told me is that the stone is almost definitely banded-iron jasper. He then told me that it has a nick-name: Genesis Stone. Now I was really curious.

It turns out that banded-iron jasper is a “secondary” or “trace” fossil (rocks that are evidence of life, but don’t contain any primary evidence, such as bones). They are evidence of one of the very first forms of life on earth: photosynthetic cyanobacteria, also known as blue-green algae.

About 2.5 billion years ago, the earth’s atmosphere was inhospitable to almost all forms of life now in existence. As algae started to create oxygen in the earth’s atmosphere, it reacted with plentiful iron in the earth’s acidic ocean. These iron deposits then oxidized. In layman’s terms…the oceans rusted. As the iron deposits became oxidized, they fell out of dilution with sea water and accumulated as sediment on the ocean floors. This process seemed to occur in waves, hence causing the formation of the sedimentary rock known as banded iron jasper. The ribbons you see in the seer stone are those iron layers on top of more common shale. The “Genesis” name comes from the implications that the stone attests in regards to the 2nd day of creation.

Close up of the seer stone.

I also learned that when this process of the earth’s atmosphere becoming more oxidized began, there was still one massive Pangaea or super-continent. I was told that – without getting too much into the theories of super-continent drift and plate tectonics – I should just take their word that most continents just have one banded iron jasper deposit, all stemming from one original deposit. In North America, that area is in a rough oval spanning parts of Wyoming and Minnesota. It doesn’t come anywhere near upstate New York, where Joseph originally found the seer stone down 15 feet or so in a well he was digging.

So how did it get there? The experts told me that judging by the egg-like shape, as well as the way it appeared to be polished and its distant location from the deposit area, it was probably a “gastrolith”, also known as a “gizzard stone”. Banded-iron jasper is rare enough on its own, but a gizzard stone is one that a dinosaur inadvertently digests, and then when it dies and decays, the stone returns to the environment. The time spent inside the dinosaur would actually aid in digestion, as well as polish the stone’s edges in a manner slightly differently than it would if it were smoothed out in a stream or on a beach. So, millions of years ago, a dinosaur near Wyoming/Minnesota probably ate a rock, traversed to upstate New York, and died. Glaciers and erosion could easily account for the 15′ depth. Normal banded-iron jaspers are actually found on the surface, and have more of a wind-blasted look, with flat surfaces and polygonal angles. A smooth egg-shaped banded-iron jasper stone like Joseph’s — I was told — was an almost impossibly rare find. In fact, as far as I can tell, it is the only banded-iron jasper gizzard stone in existence.

Beginning about 1.8 billion years ago, atmospheric conditions were such that banded-iron jasper ceased to form in the oceans. From this time forward, earth had an oxidized atmosphere which allowed oxygen-breathing life to begin, and all the iron in the oceans had oxidized. Therefore, all rocks of this type are at least as old as that.

It is undisputed that Joseph did in fact come into possession of an incredibly rare rock that was formed and prepared long before it was actually needed. The provenance of ownership from Joseph to the LDS Church is pretty clear, and its exact look and features were described by witnesses long before almost anyone had even explored the banded iron jasper deposit areas out west. He could not have known how rare it was, but what he could have known is that no one had ever seen anything like it. It was unique.

Wanting one of my own, I could only find a single vendor that offered them, and his selection was sparse. For one reason or another, the world does not place a lot of value on banded-iron jasper, despite their rarity.

I believe there are a number of interesting takeaways in the geology of Joseph’s brown seer stone, and if anything, it offers evidence that the Lord knows the end from the beginning, and that by small and simple things are great things brought to pass.

Very interesting article, but no doubt God could turn most anything into a seer stone. Something used for the early time of church history until Joseph was able to not need a stone for spiritual insight. This just happens to be the one used at the moment. Kind of like learning to ride a bike. You learn to ride a bike, then later cars, motorcycles, etc. It doesn't matter which brand of bike you used to learn to ride.

If God plans things with this much detail, could he not have just made this rock something native to New York? If it had to be this particular type of rock, why make the process of obtaining it so convoluted? I just feel like an item so important to the history of the LDS Church probably would have been treated with more respect than a dinosaur road-trip that ended in a pile of poop.