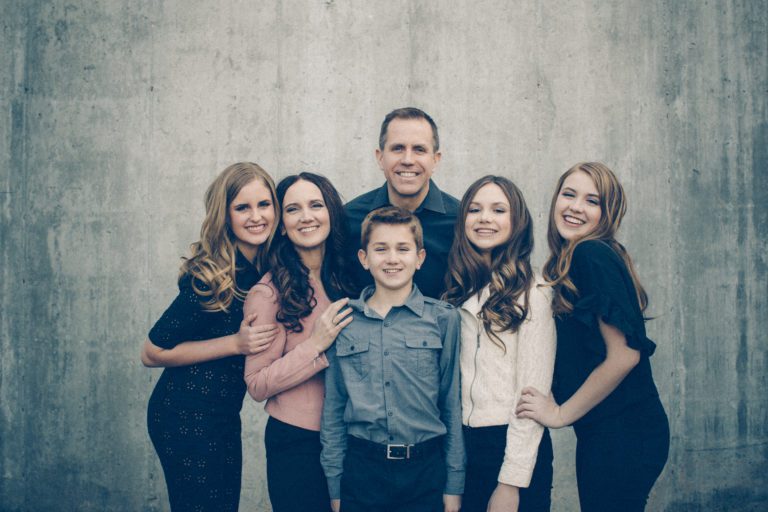 To get your copy of Jenny Oaks Baker’s new album with her children, available now, CLICK HERE. Purchase by MONDAY on her website to help them CHART ON BILLBOARDS! The album will be available digitally on iTunes Tuesday, September 3.

Jenny Oaks Baker’s heart ached as she and her husband stared up at the Eiffel Tower lit up by fireworks, listening to a symphony play. She was six months pregnant with her fourth child, and with much prayer, she felt from the Lord that she needed to leave her first violin seat in the National Symphony Orchestra—an extremely coveted position and one she could never get back (think a basketball player leaving the NBA).

The music swelled around her in the night air, and she poignantly thought, “I will never play that symphony again. I will never be a part of the National Symphony playing this beautiful work.” Then the words came into her mind, “It’s only the beginning.”

She had no foreseeable prospects in leaving the Symphony—no performances penned on her calendar—but she moved ahead with faith, trusting in those words from the Lord. Not only did she begin getting calls from conductors the day after her resignation asking her to perform solos with their orchestras but the Lord was preparing a path for her that would allow her to be the mother and violinist she wanted to be.

“[The conductors] didn’t know I had left the symphony—it was kind of hush hush because nobody leaves the symphony, and it wasn’t broadcasted far and wide, ‘Jenny is now available’—but Heavenly Father didn’t inspire conductors to start calling me until after I took that leap of faith into the darkness and after I said goodbye to the symphony and followed what I felt like the Lord wanted me to do. That’s when he started blessing me with performance opportunities that would keep me performing and show me that the Lord didn’t just want me to put away my violin, that this wasn’t the end, but he allowed me to think it was because it was a test, I think.”

Jenny had her fourth baby, Matthew, and focused even more on helping her own children develop their talents, starting each on an instrument when they were three or four years old. The Spirit guided her as she helped her children to find their musical voices, and Jenny said, “Heavenly Father sent us spirits that would be willing to work hard and that have a gift.” Her oldest daughter, Laura, began on the violin at age three, followed by Hannah on the piano at four, Sarah on cello at three, and Matthew on the violin at three. Jenny thought they could be a string quartet together.

Matthew could play the violin, but even as a three-year-old he decidedly rejected it. Jenny would place the instrument under his chin, and he would simply drop it on the ground. They soon discovered that instead of a violinist, he was a guitarist. Jenny was grateful Matthew, at such a young age, could still follow the Spirit and reject that tiny violin. With Matthew’s electric guitar skills and Laura having picked up percussion as well, Jenny said, “Instead of a string quartet, I ended up with a little bit of a rock band.”

Today, that “rock band” of many talents is releasing their first album together entitled Jenny Oaks Baker & Family Four. After her children have appeared with her on various songs in previous albums and have toured all over the world, including London, England; Bern, Switzerland; Dresden, Germany; Athens, Greece; Tirana, Albania; all around Taiwan; Japan; and Vienna, Austria, they have created an album together that represents the glory and joy of family. Their hope is that those who listen to it will feel the Spirit and their testimony of God’s love and the importance of family.

“When I play things with my kids the feeling between us is so powerful and so real, and I think people [will] feel that love and that unity. I think it’s really powerful.”

The album, much of which was arranged by Kurt Bestor, has a song that highlights each of the children on their instruments: Laura on the violin in the song “Stradivarius”, Hannah on the piano in “Of Grace and Glory”, Sarah playing the cello in “Bach Cello Prelude”, and Matthew on the guitar in “Maleguena”.

The album also features songs from a couple of their recent music videos, my favorite of which is Sound of Music Medley (which also has a vocal solo by Matt, Jenny’s husband).

Music is a family affair for the Bakers, and for Jenny whose heart was so sad to leave the Symphony those years ago, she now looks back with tender gratitude and sees the grand vista that is her life and how the Lord has led her and her family along.

“Growing up when I was a teenager, I always knew I wanted to be a mother and a concert violinist, but I didn’t know how I could bring them together,” Jenny said. She told her father, Dallin H. Oaks, that she didn’t know exactly what she wanted to do with the violin and she stressed about creating a perfect plan. He told her, “Jenny, you may not even be able to decide what you want to do. Just leave it in the Lord’s hands and don’t spend so much time figuring out what you want to do. Just prepare yourself for what the Lord has in store.”

Jenny never could come up with the perfect plan. Even when she was praying and following the Spirit and helping her children learn their instruments, she never had the full vision of where the Lord was going to take all of them or that one day they would perform together on international stages.

She knows this season will not last forever—she wants her children to fly, follow their own dreams, and have families of their own—but during this beautiful time together, they have created something wonderful that has brought them closer and given them opportunities to bear testimony of Jesus Christ through their music all around the world.

Jenny and her entire family are a true testament of faith, love, and everything else ai can think of. I have seen mostly Jenny in concert, but have also seen Family Four a couple times, I truly can appreciate all of the intense work that goes into the preparation for Jenny’s concerts (many of which I have seen). We see the final product after the countlesshiyrs have been put in. I sit in the audience in Awe as a I listen to the most beautiful music I have heard. I am sooooo proud to be able to say that I have personally met Jenny, who is a world class violinist, and her amazing musical family, Family Four. Thank you for sharing your wonderful, exquisite talents with us all !!

When your Mom and Dad came to Cedar City to the Shakespeare Festival, they brought you and then attended our sacrament meeting on Sunday. I was visiting with your Mom and she told me that you had a very difficult Suzuki teacher and that you wanted to quit your violin. I told her not to let you. My daughter was your primary teacher that day. Thanks for not quitting - we love your music and your family!!