The Sacred History of the Church in Hawaii | Meridian Magazine 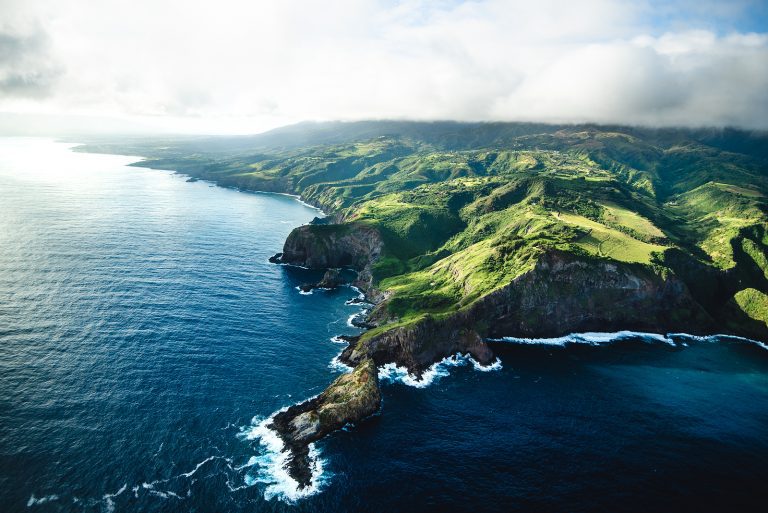 The Sacred History of the Church in Hawaii

Both George Q. Cannon (1827-1901), a remarkably talented counselor to four presidents of the Church, and Joseph F. Smith (1838-1918), a son of the martyred patriarch Hyrum Smith who would himself lead the Church as its sixth president, served formative missions in what had until recently been called the Sandwich Islands.  The archipelago in which they labored, however, was not the Hawaii of tourism and beach resorts.  It was a foreign country, a monarchy with an alien language, the most isolated chain of islands on the planet, and one of the Church’s earliest international mission fields.  Later, when they were both serving as counselors in the First Presidency of the Church, Presidents Cannon and Smith would sometimes use Hawaiian for sensitive communications.

Until a generation before the arrival of the Restored Gospel, Hawaii had also been a pagan nation, subject to a complex and even oppressive system of taboos and sometimes practicing human sacrifice.  (Interestingly, the word “taboo” itself comes from the Tongan “tapu” or the Fijian “tabu”—equivalent to the New Zealand Maori “tapu” and the Hawaiian “kapu”—which means “prohibited” or “forbidden”).  That system and the religion that had supported and justified it had been dramatically overturned by King Kamehameha II in 1819.  The very next year, in 1820, the first Christian missionaries arrived in the Islands and, by 1830 or 1831, the old religion had been effectively banned by royal decree.

Probably very few visiting tourists give it even a passing thought, but the popular vacation destination of Maui features several locations that were important for the ancient Hawaiian religion.  The Pi’ilanihale Heiau, for example, which is located near the town of Hana, was the largest pre-modern place of worship in all of Polynesia and is one of the most important archeological sites in the Hawaiian Islands.  Another especially significant religious site can be found—although, probably, it seldom is—smack in the middle of the snorkeling and resort area of Kaanapali on Maui’s northwestern shore.  (See “Diving into the afterlife in Hawaii”: https://www.deseret.com/2014/2/22/20535821/diving-into-the-afterlife-in-hawaii.)

Latter-day Saints who visit Hawaii today are aware, of course, of the community of Laie on Oahu, where a temple stands adjacent to the Hawaiian campus of Brigham Young University and not far from the well-known Polynesian Cultural Center.  Joseph F. Smith selected the site for that temple, but he did not live to dedicate it.  Many will also know that a small and much more recently constructed temple overlooks the town of Kona, on the “Big Island.”  On Maui, though, they may understandably only be thinking of whale-watching, turquoise water, and beautiful beaches.

But there are important Latter-day Saint historical sites, and even sacred places, on Maui.

Before the town of Lahaina became a magnet for tourists and shoppers, for example, it was a center for the refinement and shipping of cane sugar.  And before that, when Latter-day Saint missionaries first arrived in December 1850, it was a whaling village.  In fact—until Honolulu gradually eclipsed it after replacing it as the capital of Hawaii in 1845—it was the principal anchorage for merchant shipping in all of Hawaii and, arguably, the foremost whaling port in the world.  (From November to May, it is still an important base for whale-watching cruise boats.)

Lahainaluna Seminary—now the public Lahainaluna High School—was founded as a Protestant missionary boarding school in 1831, making it the oldest American school west of the Mississippi.  “Lahainaluna” means “upper Lahaina,” and the school’s placement high above the town was perhaps intended, among other things, to insulate its students from the riotous sailors on shore leave who frequented the little port settlement in those early days.  Relations between Protestant missionaries and some of those sailors had become so poor in 1827 that the British whaling ship “John Palmer” actually shelled the town.  In 1831, the same year that Lahainaluna School was founded, the governor of Maui built a fort in Lahaina to protect the settlement against sailors.

Lahaina was not and is not, in other words, the kind of place to which most people would be willing to affix the adjective “holy.”  And yet one of Lahainaluna’s graduates, Jonathan or Jonatana Napela, ranks as probably the most important Hawaiian Latter-day Saint convert of the nineteenth century.  Together, he and George Q. Cannon translated the Book of Mormon into Hawaiian, only the sixth non-English translation in Church history.

And Lahaina itself was the site of a remarkable theophany that set the life-course of one of the greatest nineteenth-century leaders of the Church.  See “Remembering the history of the LDS Church on the Hawaiian Islands”; https://www.deseret.com/2016/2/18/20582711/remembering-the-history-of-the-lds-church-on-the-hawaiian-islands#george-q-cannon-began-translating-the-book-of-mormon-into-hawaiian-when-he-was-25-years-old.)

Nalemanui’s home in Lahaina, where George Q. Cannon had his transformative experience with the Lord, was located near the north end of the Old Prison, which is now a museum.  Visitors there little suspect the transcendently sacred event that happened nearby.

From early in his mission, George Q. Cannon taught that the native Hawaiians are descendants of Abraham through Lehi and, thus, heirs to all of the blessings bestowed upon Abraham’s posterity.  In this teaching, he has been followed by subsequent missionaries and Church leaders.  Where did the idea come from?  On 28 December 1900, Samuel Woolley was in the audience during what would prove to be President Cannon’s final visit to Hawaii.  According to his record, President Cannon addressed an audience of Hawaiian Saints at Waikapu and “told them they were of the seed of Abraham, he knew it because the Lord told him so at Lahaina.”

Lahaina, or more precisely the sea about two or three hundred yards offshore near the entrance to the boat channel, is also the site of the famous apparent drowning of the then-apostle Lorenzo Snow in 1864, and of his apparently miraculous restoration to life.  Thirty-four years later, Elder Snow became the fifth president of the Church.  (A helpful two-minute video on the incident is available at https://www.youtube.com/watch?v=d7Kuwa5njU0.)

Only a short time after the first missionaries arrived on Maui, though, the largest congregations of Latter-day Saints on the island weren’t actually in Lahaina.  Instead, they were scattered across its northeastern coast along what is today the famous “road to Hana”—notably in Hana itself and on the spectacular Ke‘anae Peninsula.

But the very first organized branch of the Church in all of Hawaii was established by George Q. Cannon on the massive flank of the Haleakala volcano on 6 August 1851, very nearly 170 years ago.  He had made his earliest converts there near Pulehu in Maui’s Kula district.  A small wooden chapel still stands there.  Regular Sunday meetings are no longer held in it, but it remains significant.  Why?

In 1920 and 1921, Elder David O. McKay, who had been serving as a member of the Quorum of the Twelve Apostles since 1906, undertook an assigned around-the-world tour on behalf of the Church of Jesus Christ, traveling in company with Hugh J. Cannon (a son of George Q. Cannon, who had died in 1901).  Elder McKay’s experience on that global tour would later serve him well during his own tenure, from 1951 until his death in 1970, as president of the increasingly international Church.

Plainly, Pulehu was holy ground to Elder McKay and the others—and, as one Latter-day Saint family told me one Sunday afternoon on the Pulehu chapel grounds, it remains sacred to many Church members there still today.  (Some, I’m told, even hope that a small temple will someday be built on Maui, and that, if so, it will be built at Pulehu.)

“While there Elder McKay felt impressed with a desire to offer a prayer to the Lord in the spirit of thanksgiving for the privilege they had of being there, and for the many . . . who had embraced the Gospel.  We bowed in prayer, Elder McKay being mouth.  It was a moment never to be forgotten, for indeed the spot is sacred.  Elder McKay said, ‘I feel certain that President Cannon and President Joseph F. Smith are near for the veil was very thin.”  Elder [Hugh J.] Cannon was deeply impressed, and with tears filling his eyes and in a choked voice said, ‘There was no veil.’”

The group related their experience to an audience of Latter-day Saints in the Wailuku chapel later that night.  One of those in attendance in that meeting, J. Pia Cockett, recorded what he heard in a notebook:

“While he [Elder McKay] was praying, the Hawaiian Elder [David Kailimai] was privileged to see in a vision two hands clasped in the form of greeting.  He thought Cannon and Hurst were shaking hands.  He opened his eyes and saw they were apart.  He closed his eyes again and after the prayer he told what he had seen.”

It was at that point that Elder McKay made the statement quoted above, about Presidents George Q. Cannon and Joseph F. Smith being near and the veil being very thin.

For many years, J. Pia Cockett was under the impression that the clasped hands that Elder Kailimai had seen in vision were those of George Q. Cannon and his son Hugh.  In 1936, however, when President McKay—who, by that time, was second counselor in the First Presidency of the Church—was back in Hawaii on a return visit, Brother Cockett recalled the story in President McKay’s presence and President McKay corrected him, saying, “Those hands were the hands of the two fathers, George Q. Cannon and Joseph F. Smith, in the presence of the two sons, Hugh J. Cannon and E. Wesley Smith.”

I’ve depended upon two excellent sources for this column:

Professor Peterson's careful attention to the work of R. Lanier (Lanny) Britsch makes certain that his comments are based on solid scholarship. Lanny is the leading expert on the Church of Jesus Christ in Hawaii. and also on the the places in the Pacific where there are Latter-day Saints, including also Australia and New Zealand.

Fascinating! Scott and I knew a man named Clayton Kalaenuimanomano Woolley in Portland. He was my Bishop at the time and his youngest son was our Best Man. I wonder if he was related to the Woolley mentored in this story?