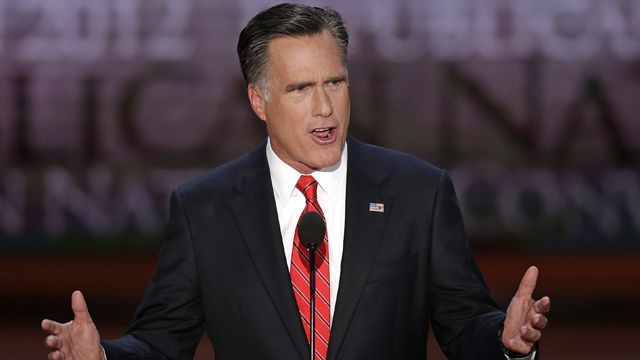 The Romney Statement: ‘I’m Not Running”

Mitt Romney called his supporters and donors Friday morning and delivered this statement:

Let me begin by letting you know who else is on this call, besides Ann and me. There are a large number of people who signed on to be leaders of our 2016 finance effort. In addition, state political leadership from several of the early primary states are on the line. And here in New York City, and on the phone, are people who have been helping me think through how to build a new team, as well as supporters from the past who have all been kind enough to volunteer their time during this deliberation stage. Welcome, and thank you. Your loyalty and friendship, and your desire to see the country with new, competent and conservative leadership warms my heart.

After putting considerable thought into making another run for president, I’ve decided it is best to give other leaders in the Party the opportunity to become our next nominee.

Let me give you some of my thinking. First, I am convinced that with the help of the people on this call, we could win the nomination. Our finance calls made it clear that we would have enough funding to be more than competitive. With few exceptions, our field political leadership is ready and enthusiastic about a new race. And the reaction of Republican voters across the country was both surprising and heartening. I know that early poll numbers move up and down a great deal during a campaign, but we would have no doubt started in a strong position. One poll out just today shows me gaining support and leading the next closest contender by nearly two to one. I also am leading in all of the four early states. So I am convinced that we could win the nomination, but fully realize it would have been difficult test and a hard fight.

I also believe with the message of making the world safer, providing opportunity to every American regardless of the neighborhood they live in, and working to break the grip of poverty, I would have the best chance of beating the eventual Democrat nominee, but that is before the other contenders have had the opportunity to take their message to the voters.

I believe that one of our next generation of Republican leaders, one who may not be as well known as I am today, one who has not yet taken their message across the country, one who is just getting started, may well emerge as being better able to defeat the Democrat nominee. In fact, I expect and hope that to be the case.

I feel that it is critical that America elect a conservative leader to become our next president. You know that I have wanted to be that president. But I do not want to make it more difficult for someone else to emerge who may have a better chance of becoming that president. You can’t imagine how hard it is for Ann and me to step aside, especially knowing of your support and the support of so many people across the country.   But we believe it is for the best of the Party and the nation.

I’ve been asked, and will certainly be asked again if there are any circumstances whatsoever that might develop that could change my mind. That seems unlikely. Accordingly, I’m not organizing a PAC or taking donations; I’m not hiring a campaign team.

I encourage all of you on this call to stay engaged in the critical process of selecting a Republican nominee for President. Please feel free to sign up on a campaign for a person who you believe may become our best nominee.

I believe a Republican winning back the White House is essential for our country, and I will do whatever I can to make that happen.

To all my supporters, friends and family who worked both tirelessly and loyally to support my campaigns in the past, I will always be deeply appreciative. What you have already done is a tribute to your patriotism. We are overwhelmed and humbled by your loyalty to us, by your generosity of spirit, and by your friendship. God bless you all.

Meridian, I hope you can forward this post to Mitt. We are broken-hearted at his decision. As he said, we very strongly feel he has the greatest likelihood of winning this crucial election. And we also feel deep down in our hearts and souls that he is the best chance this country has to "survive and revive." We greatly fear that another liberal regime will be a horrendous blow to this country's already extremely fragile condition, and we do not see another prospective conservative candidate we feel would be a strong enough contender.We won't feel comfortable voting for any of the current "hopefuls," unless Mitt shows strong support for one of them during the primaries. We greatly appreciate what Mitt has already accomplished in our nation's behalf, but are absolutely convinced that without his continued wisdom and guidance, with whatever contribution he can make, this nation.is in great peril.

A leader of the greatest integrity is one who places interest of the nation above his own. I really believe that if those in the far right--those who are always pushing to define the "most conservative" as the only option--had recognized long ago Romney was a great candidate, then he really could have been elected in 2012. The extremists in and out of the party are to blame for America losing the chance to have a real statesman + businessman for our leader.