The Road to Sunderpur: A Legacy of Hope | Meridian Magazine 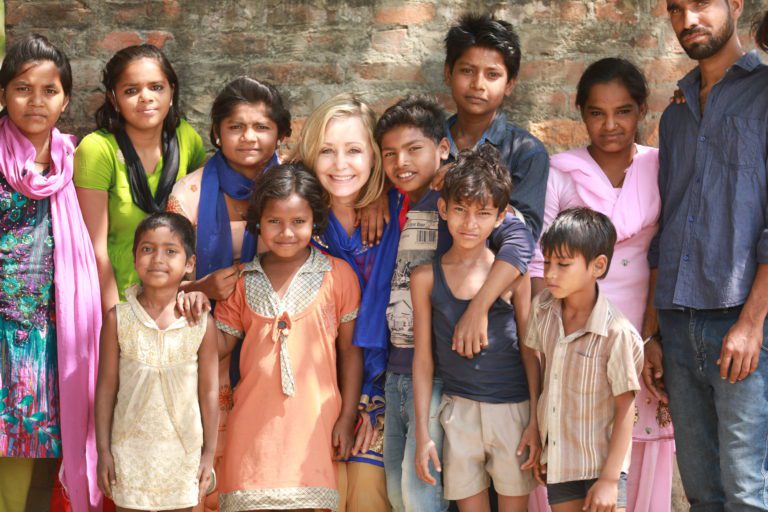 The Road to Sunderpur: A Legacy of Hope

Meridian is partnering with Rising Star Outreach to build a school for the children of the leprosy-affected in Bihar, India. We are hoping to raise $200,000 which will be matched by another $200,000 by an anonymous donor. So far our generous Meridian readers have raised over $190,000. We are so thrillingly close, but we need just a little bit more to build the elementary school. If you haven’t donated, will you?

“Baba” stood in the midst of thousands of leprosy-affected people in Bihar. It was a gut-wrenching, pitiful sight. The afflicted families had come from areas throughout the state, many of them driven out of their homes by angry mobs, determined to rid the state of leprosy patients. Their homes had been torched and they fled in panic in fear of their lives.

This was not like a normal migration. Many of these people had no feet, or even legs.  They had hands with no fingers, or even no hands at all.  Some were blind. Many were dangerously ill. As they fled in panic, with only the clothes on their backs, their situation became increasingly desperate. Many of them unable to walk were carried on the backs of family members or limped along on makeshift crutches. With legs deformed by leprosy, some were pushed in rudimentary hand-hewn wheelbarrows. Little children stumbled along beside their parents in the harsh heat of Bihar. It was one of the most tragic migrations in history.

Very few communities were willing to let them stay. “Get out of India!” “Take your curse and leave our cities!” With nowhere to go, they were driven by necessity up to the border with Nepal, with a last desperate hope that Nepal would welcome them and allow them to settle.  The time was the 1980’s.

However, Nepal had fortified its borders and mercilessly refused to let them in, thus leaving them stuck in “no man’s land“ between the two inhospitable countries. They were a people without a home. Their situation became more critical with each passing day. As is often the case with leprosy, many of them had open, seeping wounds that needed medical care. There was no food, they had no money, no jobs, no shelter, no medicine. Many began to die agonizing deaths of starvation, exposure and disease.

Mother Teresa heard of this crisis and asked Baba to go and “save these people”. But as he looked at the crowd of people pressing him on every side, his heart sank. He had been given a little money by Mother Teresa, but it was like a drop in the bucket compared to the stark needs of the people surrounding him. To him it appeared as a great undulating sea of human suffering. He had worked with leprosy for years in Calcutta but had never seen such suffering as this. He felt a sinking despair. What could one man do? Where to even start?

His real name was “Father Cristdas”, but he had been affectionately named by the leprosy patients in Calcutta as “Baba”. Facing a dire humanitarian crisis now in Bihar, Baba realized that even he, himself, had nowhere to stay. The climate in Bihar is brutal and he knew he couldn’t survive long without shelter. He prayed for guidance.

A group of suffering patients approached him. There was a straw hut close by in Sunderpur that had been occupied by a leprosy-affected family. Both man and woman had died in the past few days. While all these people critically needed shelter themselves, they insisted that Baba take this hut. He knew that it had been infected with a disease, but he finally agreed and set up his office in the tiny one-room area. It would serve as hospital, economic rehabilitation center, housing center and his home.

The next day as he opened the door, a woman fell to her knees in front of his new home, beseeching him pitifully to save her and her children.  Her husband had died the week before and she and her small children were suffering in the elements. He could not turn her away. He invited her into the hut, partitioned off a living space for her with a blanket, leaving himself only space to lie down on the floor at night. And thus began his service.

Carefully parceling the money, he bought 75 acres of land. He bought some cows and started a dairy farm and was able to employ a few dozen people. As it succeeded, he got money to eventually start goat farms, chicken farms, pig farms, vegetable farms and rice farms. Two factories were started. Now he had many hundreds of people employed.

With the generated money they all worked together to build houses—mostly out of straw, but even a few cement houses. Hundreds and hundreds of houses went up. He had a vision of better times—when these people could blossom, and they could live independently and self-sufficiently. He called the project Little Flower.

They needed to build a road into Sunderpur in order to get needed food, building supplies, and medicines. The government was unresponsive, so the patients began to build it themselves. They worked feverishly in the punishing heat of the sun, desperately trying to beat the oncoming monsoon rains. But as it turned out, that was not their greatest obstacle.

The workers began to be attacked and beaten by the villagers in Sunderpur who feared that if the road was completed, they would be stuck with a new leprosy colony right next to their village. Horror of horrors! With their deformities and compromised abilities, the workers were easy prey for the attacking mobs.

Baba begged the workers not to flee but to stand courageously and continue to build the road, because without it they would be helpless to get the necessities of life. The attacks continued relentlessly, but the patients refused to give up. Several were killed, but still with indomitable courage, they continued.

The Little Flower project has truly blossomed as Baba envisioned. Thousands of lives were saved by this amazing Father. And not just saved—today many of them are employed and live with dignity in the many businesses he started. They live in the homes he helped them to build. Their children attend the school he started, and they received treatments for leprosy in the hospital he initiated. When the leprosy-affected families speak of him today, it is always in hushed, reverent tones and with awe. One man told me that as far as he is concerned, Baba is his God.

It is a striking testimony to me of the good that can be accomplished by one man, willing to serve at great personal sacrifice and lift his fellowmen. In this case, he was Christian, and the people served were Hindu. To Baba it made no difference—he saw all as simply children of God.

So why am I sharing this story with you? Well, because Rising Star Outreach has been invited by Little Flower to take over the school and run it as a Rising Star Outreach School. This is the biggest challenge we have ever encountered. Scot and Maurine Proctor came with me on one of my initial visits. They, too, were touched by the plight of the children in this school. This is a school without a decent building, no qualified teachers, no books, no lights, no fans, and no curriculum.

But it is a school built on hope. There is a thirst for education, a hunger for opportunity and success in life. There is a willingness to work unceasingly to create this envisioned change. Scot and Maurine Proctor have pledged the support of Meridian Magazine and have graciously offered to help us raise the necessary funds to build a new campus for this little school.

I have now visited this school several times. Each time I come away excited by the possibilities. But also, intimidated by the challenges of creating a successful school in an area of such crushing poverty and hardline stigma.

Fortunately, God has brought many allies. The President of the Little Flower Board is now the top government official in the area. We have found an incredible director to oversee this project. Little Flower has agreed to give us eight acres of beautiful land alongside a scenic river to build the new campus. And already we have had several unbelievably generous people step forward with pledges of financial help.

It will be challenging, but I believe it is possible. We are determined to follow the courage and vision of the workers who built the road into Sunderpur against such unbelievable odds. Following their heritage, we will build a road, not into Sunderpur this time, but out of Sunderpur into success, dignity, and integration into normal society for the children of those who built the road at such tremendous personal sacrifice. Through the new school, these children will have the opportunity to finally find success and acceptance—which was the dream of the founders of Sunderpur all along. Their lives and sacrifices will not have been in vain.

This has been such a wonderful campaign of love!! We love Becky and we love the people she is trying to help and we love and thank Meridian for this amazing project. It is a win win for everyone!!

May the Lord continue to bless you as you do His work.