The Quill Project: Bringing the True Intent of the Constitution to Light | Meridian Magazine 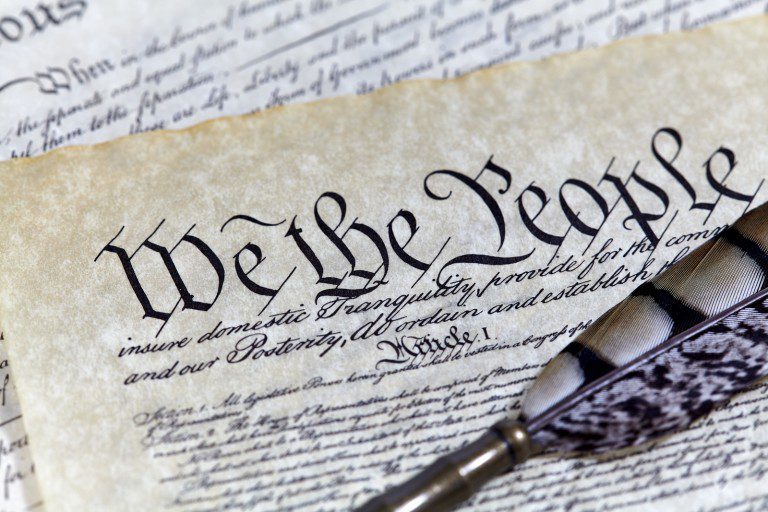 The Quill Project: Bringing the True Intent of the Constitution to Light

To track each step in the process, including both accepted and rejected versions of the various provisions of the Constitution, however, required more than software that could be adapted to that end – it required hours of hard work tracing each decision, each lifting of the quills of the framers so to speak – and then integrating those decisions into a single accessible web source. After working with students at other institutions and with some gentle persuasion from President Matthew Holland at Utah Valley University, Dr. Cole turned to students at Utah Valley University to work on the project. As a result of that decision, the labor was largely performed by Wood Assistants, undergraduate students working at the Center of Constitutional Studies at Utah Valley University, and their work ethic and intelligence has been repeatedly praised by Dr. Cole.

Howard Chandler Christy’s Scene at the Signing of the Constitution of the United States.

For example, if one wants to understand the reasons behind (each step in) the development of the Electoral College, one can turn to Quill, https://www.quillproject.net/quill. Other issues are open to examination, including impeachment, appointment of judges, the treaty power, etc. Admittedly, there are times when other sources, such as The Federalist Papers and the records of the various state ratifying conventions help clarify the meaning of each provision in the Constitution. Nevertheless, the best place to start is with the Convention itself and the optimal way to do that is to turn to The Quill Project. Using Quill takes some work but that work can be informative and fun. Danielle Maddox, one of the UVU students working on The Quill Project, reflected, “Because I’ve been so dedicated to Quill – I go in every day and follow a specific process – it has changed me as a student. I commit myself to my classes more.” Dani added, “You start to become acquainted with the personalities. And you think, ‘oh my goodness, you would say that.’ It’s kind of fun.”

Under the direct supervision of Dr. Carl Scott, an instructor within the Center for Constitutional Studies, and the guidance of Dr. Cole, at Oxford, the students are turning their energies to future projects, including a comprehensive study of state constitutions, beginning with the Utah Constitutional Convention. This is engaged learning at its best – students learn about the Constitution, constitution making, public service, and the use of cutting-edge twenty-first century technology. Some find it curious that Utah Valley University could be an academic partner with Oxford University, but it is not surprising given UVU’s genuine commitment to an engaged learning model.

The partnership with Oxford was formalized this year in a Memorandum of Agreement between Oxford and UVU. That partnership continues to bear fruit. This summer UVU students associated with the Center or the University’s Constitutional Studies Minor will be going to Oxford to receive unique instruction in American constitutionalism, in the form of classroom instruction, readings, and tutorials led by Dr. Cole, Dr. Scott and others.

To visit the Center for Constitutional Studies at Utah Valley University is to observe students working diligently at their computers, examining historical material with precision and helping to make those materials accessible to the broader public. It is also observing those same students talking with Dr. Cole (via Skype), Dr. Scott, and each other about the substance of the materials and doing so with the insight of well-schooled constitutional historians. A chance meeting between Dr. Cole and President Holland helped make this all possible. Was that meeting inspired or mere coincidence?

The answer to that question may be in the eye of the beholder. To those who have watched this unique agreement between one of the world’s great established universities and a thriving young university in Utah unfold, this partnership may be a miracle that is much-needed in these precarious times for the constitutional rule of law. After all, James Madison, the Father of the Constitution, who regularly recognized the influence of Divine Providence in the creation of the Constitution, was surely inspired when he noted, “Knowledge will forever govern ignorance; and a people who mean to be their own governors must arm themselves with the power which knowledge gives.”

Dr. Smith directs the Center for Constitutional Studies at Utah Valley University and has recently completed a book, MADISON: Religious Conscience and the Constitution.