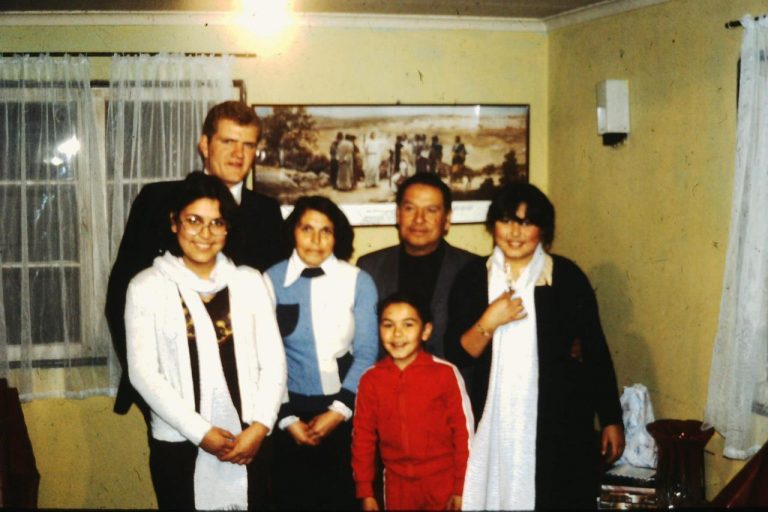 The Miracle When the Prophet was our Father’s Doctor

When President Russell M. Nelson speaks in church conferences, members around the world can appreciate the love, compassion, and divine authority in his testimony of Jesus Christ, but our family feels a very personal emotion of gratitude, because a miracle allowed us to know him as the great humanitarian doctor he is.

Sitting on a park bench the fall of 1979, my father was about to declare defeat. Nothing seemed to work out in his family’s life. Our poverty and lack of work made his situation more desperate. Recently, Dad had sought spiritual answers from various churches but still found no comfort in his concerns. As if that were not enough, he felt that his health was weakening day by day.  He came to think that God had forgotten about our family.

Suddenly, two tall, blond, young men approached him. With great warmth, they gave him the simple words of comfort and hope he needed at that moment. As if the heavens had been opened, my father felt that these young men were the answer to his prayers. He immediately invited them to our home, we listened to their message and our whole little family was baptized into the Church of Jesus Christ.

Soon, however, our trust in the Heavenly Father would be tested. Dad was feeling more and more delicate in his heart. One day, we decided to use what little money we had left to send him to a doctor’s office. The cardiologist examined him and determined that he could not move from his office. My father´s heart had only 33 beats per minute. The doctor did not understand how he could still stand. Finally, Dad was admitted in a serious condition to the Catholic University of Chile Hospital.  At that time, the specialists diagnosed that my father needed a pacemaker. Unfortunately, at that time there was no such medical input either in the hospital or in the country because of the great political and economic upheaval. My father was doomed to die or wait for a miracle.

With great faith, the bishop and his advisors arrived at the hospital room of the Catholic University to give him a health blessing. While they were anointing him, a group of doctors and an extraordinary guest –with great ties to Chilean doctors—entered. He was in the country teaching cardiac surgery at the same Catholic University. It was the cardiologist, Russel M. Nelson, eminent in his specialty, and at that time General President of the Sunday School of The Church of Jesus Christ of Latter-day Saints. The Chilean doctors left Dr. Russell Nelson with my father, whom he comforted with sweet words. He took his hand and told him that everything would be fine, that he would soon return to his family, and that one day he would attend the future temple that would be built in Santiago, Chile because the Lord listened to prayers. Two days later, and thanks to the efforts of the then doctor, Russel M. Nelson, Dad was operated and had a pacemaker installed.

My father lived 10 more years and the Gospel changed our life.  We were sealed as a family in 1985 in the recently inaugurated Temple in Santiago de Chile.  Dad worked as a laborer in the House of the Lord until the end of his earthly days. His three children married members of the church, and today his first grandson is on a mission in southern Chile. During this time, the then Apostle Nelson continued to strengthen ties of cooperation with our country and with the Catholic University of Chile. We never forgot this wonderful and compassionate doctor who was the instrument to extend our father’s life. Many years passed until Apostle Russell Nelson was sustained as the new prophet of the Church. On that day, our family’s heart vibrated especially with joy and emotion. From afar we sent him our deepest gratitude, for he was the servant chosen to teach us that the Father always answers our prayers and, at the moment when we felt most alone, he led us by the hand to the Gospel.

This is a beautiful story. I lived in Chile at that time, so I met the Bolivar family and was deeply moved by the fact that doctor Nelson (now president Nelson) had been an instrument in restoring brother Bolivar's health. My family and I were also blessed by the missionary service from elder Lebaron and his companion.

What a beautiful, wonderful story. The Lord was sure in charge on that on!