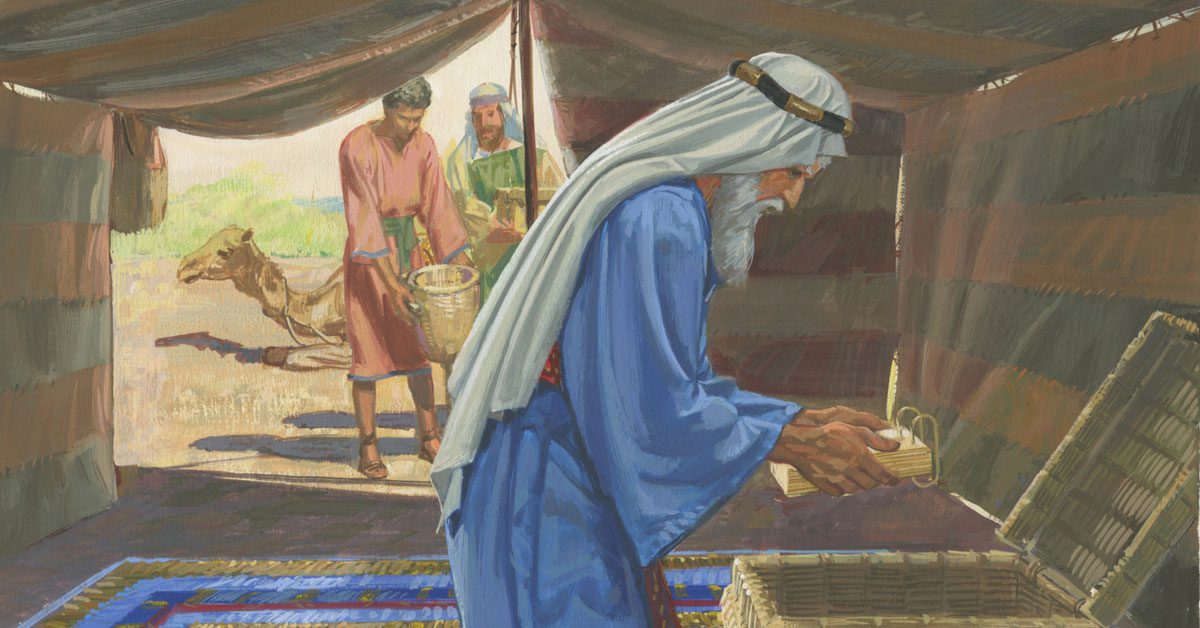 “Wherefore we labored diligently among our people, that we might persuade them to come unto Christ, and partake of the goodness of God, that they might enter into his rest, lest by any means he should swear in his wrath they should not enter in, as in the provocation in the days of temptation while the children of Israel were in the wilderness.” Jacob 1:7

In the previous parts of this series, we discussed the idea that much of the New Testament-type material in the Book of Mormon may have been introduced by the resurrected Savior himself (Part 2) or through direct revelation to the Nephite prophets (Parts 3 and 4). Besides these, another source for phrases that seem to match parts of the New Testament is the plates of brass that Lehi’s family had in their possession. Far more often than readers usually realize, many New Testament passages are quoting or paraphrasing Old Testament texts that could have been available to the Nephites through the plates of brass. For example:

Where post-exilic3 Old Testament texts (presumably unavailable to the Nephites) are the source of a phrase in the New Testament, it is often possible that those expressions could have been using pre-exilic phrases that existed in early Hebrew language and literature but did not survive in pre-exilic biblical records.

Although they often directly cite Old Testament passages, there are also many instances where New Testament authors can be seen to clearly allude to or paraphrase Scripture. Because these examples can be more difficult to detect, estimates of the total number of references to the Old Testament in the New vary greatly, ranging from around 600 by some counts to over 4000. It would not be an exaggeration to assert that over ten percent of the New Testament text is drawn from the Old Testament and it could be more than that.6

One of the reasons that many of the Old Testament references are so hard to identify is that there is not always a citation formula such as “it is written” or “thus saith the prophet” to indicate that a scripture is being used.7 Furthermore, when New Testament authors echoed, alluded to, or paraphrased Old Testament passages, they often used the scriptural language freely and without attribution. As noted by biblical scholar Steve Moyise, “Allusions are less precise [than quotations], picking up on a few key words and usually woven into the new composition.”8

Additionally, in many instances where the New Testament is quoting the Old, the quotation is difficult to recognize because the translators of the King James Version of the Bible did not attempt to be consistent in how they translated equivalent words and phrases from the Hebrew of the Old Testament and the Greek of the New Testament into English.9 For example, for this reason even the names of famous prophets are spelled differently in the New Testament: Isaiah = Esaias, Noah = Noe, Elijah = Elias, and Joshua = Jesus. Due to these types of issues, Isaiah’s prophecy in Isaiah 40:3, “Prepare the way of the Lord; make straight in the desert a highway for our God,” became, in Matthew 3:3, “Prepare the way of the Lord; make His paths straight,” and in John 1:27, “Make straight the way of the Lord.”10

With this in mind, readers may be unaware that sometimes what appears to be a New Testament phrase or passage in the Book of Mormon may originally be from the Old Testament. What initially seems to be an anachronistic use of later Christian scripture may actually be a quotation or paraphrase from something to which the Nephites had access on the plates of brass.

Although this is not the case for all New Testament material in the Book of Mormon, this perspective can be a helpful one for those who encounter New Testament language in their Book of Mormon reading and want to know why it is there. Readers can analyze the relevant New Testament passages (and perhaps consult biblical commentaries and other scholarly resources) to see if the New Testament author may have been utilizing a more ancient Old Testament text in his writing.11

The appearance of Old Testament writings and prophecies in both the New Testament and the Book of Mormon can serve as a testimony to readers that the authors of these latter two books of Scripture considered the writings of the Old Testament to undoubtably be the word of God and felt that it was their duty and privilege to share these sacred texts for the eternal benefit of others.

This KnoWhy was made possible by the generous contributions of Bryson & Jan Garbett.

1.Hosea 13:14, English Standard Version. The ESV uses “Sheol” (“Hell”), following the Hebrew, but this is translated as “the grave” in the KJV.

3.The term “post-exilic” refers to the period of time in the Bible that starts in 538 B.C., following the 70 years the Jews spent as captives in Babylon (“the Babylonian exile” or “Babylonian captivity”). The pre-exilic period ended in about 600 B.C., when King Nebuchadnezzar of Babylon destroyed Jerusalem and took many of its inhabitants captive. This was just after Lehi and his family left Jerusalem to go to the promised land.

6.Nicole, “New Testament Use of the Old Testament.”

7.Although, according to Nicole, there are about 224 direct citations that do include this type of introductory statement. See Nicole, “New Testament Use of the Old Testament.”

8.Steve Moyise, The Old Testament in the New: An Introduction (2nd Ed. London: Bloomsbury T&T Clark, 2015), 7. Additionally, the New Testament authors were often quoting from biblical texts and translations, like the Greek Septuagint, that did not always match precisely the versions that were eventually translated into English as the King James Version that we use today. This fact, among other reasons, resulted in variations between the rendering of Old and New Testament texts that can create the illusion that a quoted passage in the New is not related to the source text in the Old. A simple illustration of this would be Hebrews 9:20, which quotes the words of Moses in Exodus 24:8. Hebrews 9:20 (in the KJV) renders the statement as “This is the blood of the testament which God hath enjoined unto you.” Compare this to how the original quote reads in the Old Testament: “Behold the blood of the covenant, which the LORD hath made with you.” There are many examples of apparent discrepancies like these in the New Testament’s use of the Old that would make it difficult for readers to immediately notice that an Old Testament passage is being used without reading the contexts of both passages.

10.Perhaps for the benefit of English-speaking readers of the Book of Mormon who would possibly be more familiar with the New Testament version of a quoted Old Testament passage, the Book of Mormon sometimes presents Old Testament passages in the form that they appear in the New Testament. For example, Jacob 4:17 alludes to Psalm 118:22, but the wording it uses is closer to the quotation of that psalm found in Matthew 21:42; Mark 12:10.

The claim that the Book of Mormon is a fraud simply because it uses phrases and terms not used until the new Testament is as ridiculous as can ever be. Think about it... God speaks to prophets and he often tells them the same things. God is the same Yesterday, today and tomorrow. So why couldn't these statements all have originated from Him? And if they did then he can pass them on to any prophet at any time and they are still valid. God is the Origin of the Old Testament, the New Testament , The Book of Mormon and the D&C. So if things seem to repeat then God is just trying to get us to pay attention to these statements.