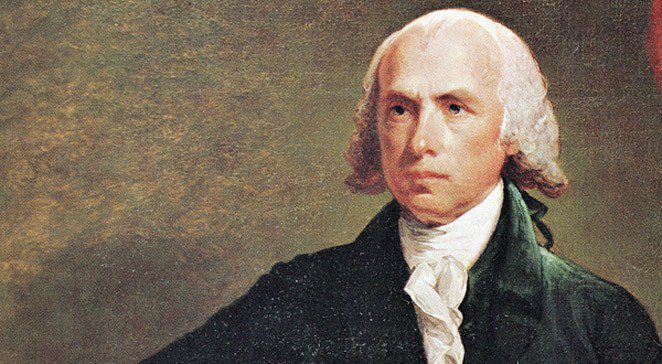 The Old Testament and Hebrew Influence on James Madison, the First Amendment and Religious Liberty

James Madison, the Father of the Constitution, was deeply influenced by his study of Hebrew and the Old Testament. While attending the College of New Jersey (Princeton) as a young student, he read his scriptures religiously, writing in the margins. He also attended daily devotionals, which were largely taught by John Witherspoon, a great teacher and clergyman, who was well schooled in Hebrew, Greek, history and theology.

Witherspoon was “America’s most influential teacher.” Princeton was small – fewer than 300 students in all four classes – but it was a very special place. During his service at Princeton, Witherspoon taught 37 judges (3 served on the U.S. Supreme Court), 9 Cabinet members, 21 U.S. Senators, 39 members of the U.S. House of Representatives, 12 Governors, 1 Vice President (Burr), and 1 President (Madison).” Much of this at a time when there were only thirteen states. Witherspoon was also a patriot who served in the Continental Congress and signed the Declaration of Independence. President John Adams referred to Witherspoon, “[A]s high a Son of Liberty, as any man in America.”

Madison graduated in only two years, but he reflected, if collegiate life “is a state of bondage, then . . . I am in love with my chains.” He had learned much from Witherspoon and his other teachers, including being taught Hebrew and the Old Testament. Upon returning home to Montpelier (the Mount of the Pilgrim), he was anxious to select a suitable profession. He thought of the possibility of being a lawyer or a clergyman. Based on his letters to his classmate and friend, William (Billy) Bradford, Madison did not like the prospect of working in a law office and was convinced that there “were too many lawyers.”

Madison did not have a sincere attachment to any religious sect, so the clergy was out of the question. Nevertheless, he wrote Bradford that “A watchful eye must be kept on ourselves lest we are building ideal monuments of Renown and Bliss [and neglecting] to have our names enrolled in the Annals of Heaven.” Those letters to Bradford also reveal that Madison was deeply “vexed” over the fact that the established church (Anglican) was commandeering the government to persecute minority religionists, particularly the Baptists who were forced to preach from a jail cell where they were imprisoned for failing to obtain a license and pay a fee.

Without any employment prospects and bored by his present circumstances, Madison became clinically depressed. He tried the cures of the day, including being bled and bathing in the medicinal waters at Warm Springs, West Virginia. Each cure failed and he turned finally to the balm of education, decided to return to Princeton for graduate study in a revealing and challenging area, Hebrew. He studied under an able tutor-teacher, John Witherspoon. Studying Hebrew profoundly influenced his role as America’s greatest lawmaker.

During his study, Madison came to understand the power of a parallelism in Hebrew and the Old testament, a literary device designed to explain difficult concepts with clarity and grace. He enjoyed Psalm 34:10, an example of an antithetical parallelism: “A wise man’s heart is at his right hand; but a fool’s heart at his left.” Similarly, he surely found joy in the wisdom of Proverbs 8: 35-36, which included two synonymous parallelisms (couplets designed to emphasize an important idea) that made up a single antithetical parallelism, consisting of two contrasting thoughts or concepts that clarified a single idea. Those verses read, “For whoso findeth me findeth life, and shall obtain favour of the LORD. But he that sinneth against me wrongeth his own soul: all they that hate me love death.” As a lover of literature, language and theology, Madison valued the words of Isaiah, including this antithetical parallelism from Isaiah 2:4 – “And he (Yahweh or Jehovah) shall judge among the nations, and shall rebuke many people: and they shall beat their swords into plowshares, and their spears into pruning hooks: nation shall not lift up sword against nation, neither shall they learn war anymore.”

Madison returned to Montpelier renewed and soon found his purpose in life. He served in local government for a short time and then was elected, while still in his twenties, to serve as a delegate to the Virginia Constitutional Convention which was designed to establish an independent and free government dedicated to securing rights during a time of increased revolutionary activity. Madison believed that just governments are “instituted to protect rights” and he set to work on a provision that would secure the pre-eminent natural right of religious liberty.

He understood that the right of conscience as he referred to religious liberty was made up of two seemingly contradictory values or rights – the right to freely exercise one’s religion and the right to be free from government preference for a religious sect or group of sects over minority sects. For Madison, religious liberty was best defined in the Hebrew literary form of antithetical parallelism, two contrasting thoughts that complete a single concept or idea.

In his religious liberty proposal, Madison wrote, “That religion, or the duty which we owe to our Creator, and the manner of discharging it, being under the direction of reason and conviction only, not of violence, or compulsion, all men are entitled to the full and free exercise of it according to the dictates of conscience; and therefore no man or class of men ought on account of religion to be invested with particular emoluments or privileges, nor subjected to any penalties or disabilities, unless under color of religion the preservation of equal liberty, and the existence of the State be manifestly endangered.”

Madison conceived of religious liberty as an antithetical parallelism founded in a duty to God. On the one hand, men are “entitled to the full and free exercise of [religious conscience].” On the other hand, they should be free from government preference of a single sect or group of sects that disadvantaged minority sects disapproved of or ignored by a tyrannical majority. Free exercise and establishment were therefore juxtaposed as an antithetical parallelism to secure “equal liberty.” Madison firmly believed that God and truth need nothing more than equal treatment (a level playing field) and the full and free exercise to secure religious liberty in its purest form. Madison also emphasized that the only time a just government could limit conscience was when “the preservation of equal liberty, and the existence of the State be manifestly endangered,” required that it do so.

Madison was laying the foundation for his future service as “The Father of the Constitution” and as the primary sponsor and drafter of the Bill of Rights. He initially opposed a written Bill of Rights, fearing that no mere human could put such a sacred right into binding language. In Federalist #37, Madison declared, “[N]o language is so copious as to supply words and phrases for every complex idea, or so correct as not to include many equivocally denoting different ideas. . . When the Almighty himself condescends to address mankind in their own language, his meaning, luminous as it must be, is rendered dim and doubtful by the cloudy medium through which it is communicated.” He feared that the majority would read any such language restrictively to permit it to tyrannize disfavored minority religious individuals and sects.

Thomas Jefferson and the Baptists eventually persuaded Madison that a written Bill of Rights was necessary to protect the Constitution from its ardent opponents and to secure rights. They also expressed their collective faith in Madison’s capacity as an advocate and draftsman.

Once persuaded, he led the effort to secure a viable Bill of Rights. In time, the House and Senate, with help from a Conference Committee, that was made up of three members of the House and three Senators half of whom were graduates of Princeton, including Madison, agreed to the language of the first freedom, the right of conscience. Madison’s fingerprints are all over the agreed to language, which was written and can best be understood as an antithetical parallelism: “Congress shall make no law respecting an establishment of religion, or prohibiting the free exercise thereof,” and not as two separate clauses as so many do today. As Emmi Priddis Yildrim has noted, “If both phrases of the First Amendment are understood to be participial phrases, the First Amendment is also revealed to be a beautiful instance of antithesis. The grammatical structure of the two phrases is identical, and the phrases even have the same number of syllables. . . [T]he antithetical means of infringing religious freedom—granting particular favors to a religion and imposing particular disabilities on a religion—would be beautifully juxtaposed in identical grammatical structures.”

In this single, beautifully written antithetical parallelism, Madison drafted a single provision, made up of two antithetical phrases, designed to deal with the dark side of religion (governmental establishment of or preference for a particular sect or group of sects) and what he would later refer to as our most “sacred property,” the full and free exercise of the right of conscience free from the tyranny of the majority. Madison employed this revered literary form to remind future generations that our First Freedom, our most sacred right, should ever remain free from the tyranny of the majority. Let us not forget this wondrous lesson in literature and law.

Rodney K. Smith, Scholar in Residence and Director at the Center for Constitutional Studies (Utah Valley University) and author of JAMES MADISON: The Father of Religious Liberty, which explores the subject matter of this essay in much greater depth.

James is right about Madison opposing chaplains. I discuss the issue at some length in my book. He feared that chaplains would be selected from majority religions and paid for with general tax dollars. He also opposed having a religion department at the University of Virginia. He preferred a wonderful solution -- let all religions have property near the university where they could establish "institutes" (his term) that would have regular access to the university. In today's world where chaplains have been drawn from most faiths, I am not sure how he would stand on the issue -- remember, establishment meant non-preference and equality for all religions. Remember, as well, that his history was one of bloodshed, imprisonment, and persecution of minority religions when one religion was given special preference by the government. His view actually squares very nicely with the 134th section (I wrote an article on this for the BYU Law Review).