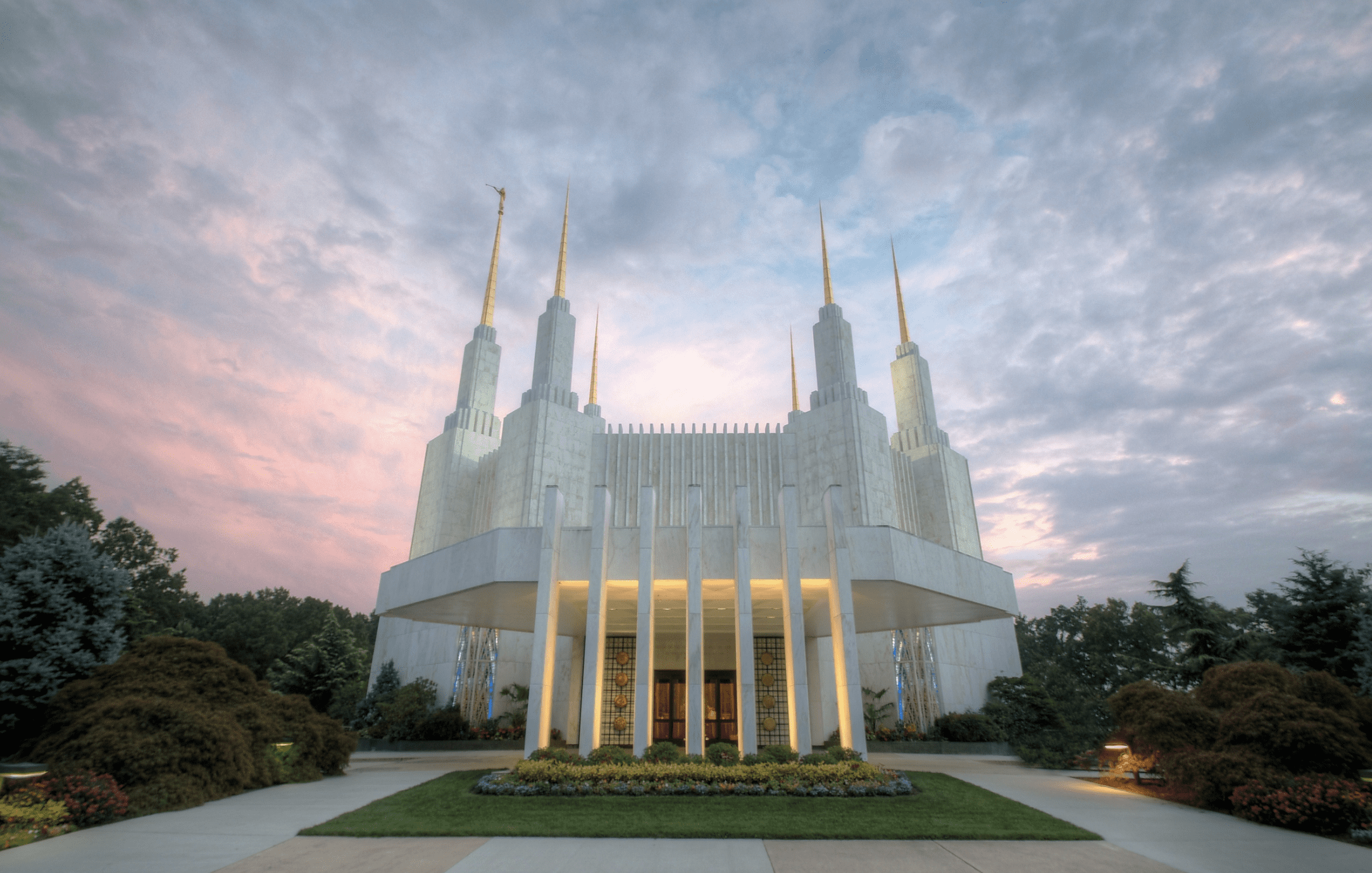 The Miraculous Assistance of “Temple” Angels

Can attending the temple change your life? What actual blessings can you receive from doing family history and temple work? Those are powerful questions, and there are powerful answers. When we do this work of gathering on both sides of the veil, the heavens are unleashed for our good!

There is great organization and synchronicity beyond the veil.  If spirits want their work done, and find willing participants, they will bless the participants in varied and amazing ways.  Sometimes they even get physical in their help.

Robert Cowart recounts a time where he felt the physical force of an angel aiding him in finding an important book he needed to continue his family research.  He had been searching for years for any information on his father’s grandmother, Francis Allen, and discovered that there were two books in the Family History Library in Salt Lake that would give him the information he needed.

One day, he had a four-hour layover in Salt Lake City, while traveling for his work, and decided to take a cab to the library and see what he could find. He found the location of the books he thought might have the information, but there was nothing about Francis Allen. He writes:

“I only had a few minutes left so randomly checking books was not possible.  When I walked back to the book area I sensed the presence of numerous spirits. As I sat there my right hand all on its own went to the shelf right in front of me and took a book off the shelf.  I opened the book to the index and there was a   Frances Allen! I went to the page and there was a wedding announcement for her and my Great grandfather, saying Frances Allen of Jefferson County! No one would have ever guessed that she was from there.”

Robert then called his wife and excitedly told her the news.  When he returned home, they made the trip to the Jefferson county courthouse and shortly discovered that Frances Allen had been orphaned when both parents were killed in an accident.  Because of the physical angelic intervention and in-depth synchronicity Robert was led to the book, where he could quickly trace her genealogy back to Ireland. (Robert Cowart, Story used by permission).

M. Russell Ballard taught about the eligibility we all have for angelic assistance when we honor the covenants we make in the temple.  He said:

“All who have made sacred covenants with the Lord and who honor those   covenants are eligible to receive personal revelation, to be blessed by the   ministering of angels, to commune with God, to receive the fulness of the gospel, and, ultimately, to become heirs alongside Jesus Christ of all our Father has.”(M. Russell Ballard, “Men and Women and Priesthood Power,” Ensign, September 2014 Italics added).

I love an experience conveyed to me by Patricia H Arnazzi. It illustrates the painstaking details that angels can orchestrate in order to help us, especially when they know we have sacrificed for them.  She writes about a series of miracles she experienced on an extraordinary Saturday morning when she attended the temple.

“As every Saturday, I had gone to the LA temple to serve. Once there, I decided to do initiatory names. Later that day, I was taking a very important licensing examination at the university, but I thought I would have enough time to drive there (over an hour drive) and do all ten names I had received.

“All went according to plan, until the last three names. The LA temple was closing for renovation and that Saturday was packed with patrons and not enough workers. They came to pull workers to take them to help with the veil and invited those of us waiting for a booth available to return the unfinished work if we could not wait. I checked my watch and realized that if I waited, I would miss that very crucial licensing exam.

“I was about to return my unfinished work when I looked down to read those three names again. I read their information, including the dates when they had died and realized they had been waiting too long for those ordinances. My heart    melted. I could not do that to them and made my decision to patiently wait to do their names.  I prayed for Heavenly Father to help me later on the road and to change the laws of physics so that I could arrive on time for my test. “As soon as I thought this, I felt myself being embraced as if in a group hug. A wonderful sense of peace engulfed me.

I waited for thirty minutes without complaint. In fact, when some of the other sisters waiting with me would complain that it was taking too long, I would only smile peacefully as if I had all the time in the world.

“After I was finished, I rushed to my car and realized I had only thirty minutes to cover 75 miles, an impossible task any day in LA.  I knew I would be late for my exam and most likely denied entrance, but I decided to risk it.

“I was driving to the max speed when all of a sudden, I felt a strong impression to reduce the speed drastically. I questioned it for a second since the road was almost clear and I was making good time, which perhaps would help me in pleading leniency later for my test. But the impression was too strong, and I obeyed. I saw the speedometer go from 65 to 30 and then, heard a loud pop on the right. I saw a car driving on the last lane of the freeway lose control and start   spinning coming into the second lane and barely missing a car, going into the   lane next to me and finally crashing on the median wall right in front of my car. I hit the brakes and had no problem avoiding the collision since I had already reduced my speed before.”

The miracles did not end there for Patricia.  Upon reaching the university, almost an hour late, Patricia discovered with joy that technical difficulties had delayed the test and that it had not even begun.  She feels strongly that those “temple angels” protected her and helped her pass that exam.  (Patricia H Arnazzi, Story used with permission)

“…every time you worthily serve and worship in the temple, you leave armed  with God’s power and with His angels having “charge over” you. (Russell M.  Nelson, “Spiritual Treasures,” Oct. Conference 2019, Italics added)

Departed Cousin Leading the Way to Find Many Family Names

A few years ago, Rex Lowe was in the temple sitting in a session with his eyes closed talking to the Lord.  Suddenly he became aware that there was someone standing next to him.  Rex wrote:

“I opened my eyes and there was my cousin Ken. He said, ‘Rex why haven’t you done my work?’  I sat up stunned, asking myself the same question. (When he was alive, we were good friends and I had shared the Gospel with him, but shortly afterwards he had moved to Canada. We corresponded and I told him I would send the missionaries so he could be baptized.  He wrote back and said it was too late, he was rapidly dying of brain cancer. Then I got a letter from his wife saying he had passed away).

“When I arrived home after that vision with Ken, we decided not only to do his work ASAP, but to go thoroughly through our records again.  Because of this renewed effort, fresh and unexpected avenues opened up helping us to find a treasure trove of family names.” (Rex Lowe, Story used with permission)

So, Ken and many other souls benefited from Rex’s labors.

“All the angels in heaven are looking at this little handful of people, and stimulating them to the salvation of the human family.”(Brigham Young, 309, 299, cited in Nelson, “Young Adults and the Temple,” Ensign, Feb. 2006, 15.)

Grateful ancestors want to help us.  Charles Harper experienced family from beyond the veil during a crucial priesthood blessing.  He writes:

“My parents were on their way to visit my father’s family when dad had a heart attack. They had driven cross-country from California, which was how they had traveled for years; dad had only two weeks to see his family.

“We are converts to the church, and dad and I were the only ones in the family who were blessed with the priesthood. I received a phone call asking that I come and give dad a blessing.  I felt so alone in the hospital room as I laid my hands on his head to give the blessing, but as I did, I became aware that the room was filled with priesthood holders who were there to be part of the blessing.”

My mother’s efforts to find ancestors had resulted in the ordination of several departed family members who were there to help me anoint and bless dad. I didn’t see them, but I could feel them and knew they were there.” (Charles Harper experience used with permission)

Quentin L. Cook confirmed the powerful truth about angels when he said:

“Never underestimate the assistance provided in temples from the other side of the veil.” (Quentin L. Cook, “See Yourself in the Temple,” General Conference April, 2016)

Can Attending the Temple Change Your Life?

What blessings can doing family history and temple work bring? A critical book located; a difficult test passed; abundance of family names discovered; loving support given, and lives saved.  Who wouldn’t want those blessings? When we do this work of gathering on both sides of the veil, the heavens and their hosts are unleashed for our good.

I have frequently (including today) had the experience where after coming home from the temple, I take a few minutes to locate additional sources for the person and with that process find spouses or more siblings. They are waiting for us to do what can only be done in mortality. Oh, and those who struggle to find available family names, your work with indexing can bless many individuals.

I had been waiting since Aug. 17, 2019, after my endowment to start on my family's work. One of my great grandmothers was very important to me because I look just like her and my great grandfather was done and she wasn't so I notified the person and finally Sept. 22, 2019, I got her opened up and printed everything off. On the 25th I went to the Temple. I was just going to baptize her but, I felt this presence, that kept me there. I went on and completed everything with her that day. I knew she was not letting me leave without getting her work done. I sat in my car and smiled and cried at the same time. I am so happy that I was able to help her.