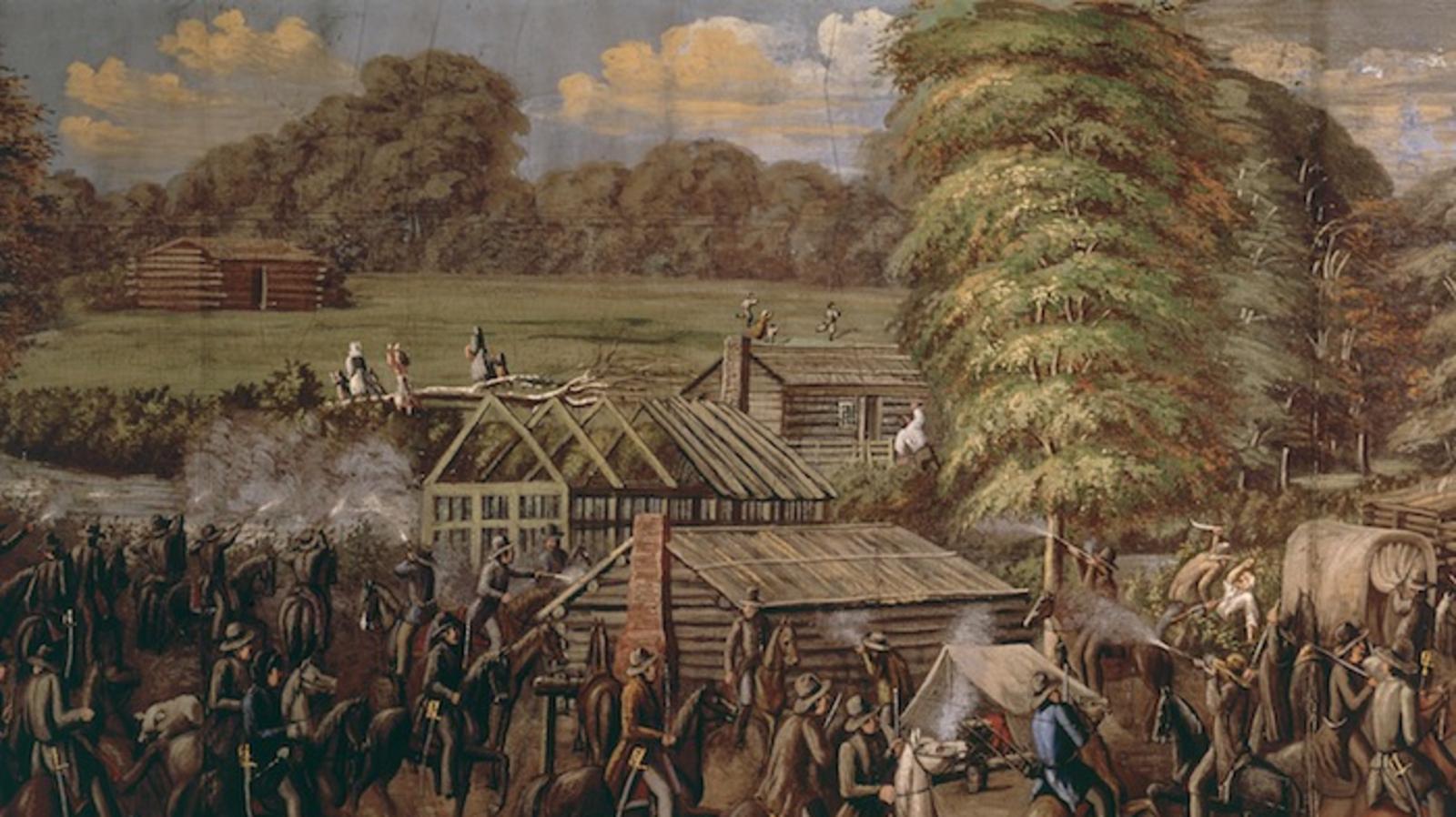 Last week’s account of Amanda Smith, and the miracle of her son’s hip have focused my thoughts on Haun’s Mill. I visited the site a few years ago and determined to climb a tree that tilted out over Shoal Creek, where the mill was located, in order to take a photo up the length of the river. I looped my camera around my neck and began to carefully navigate the 14 inch trunk curving like a rainbow high above the shallow water of the stream below. I was about 30 feet over the river when I slipped and came within an oak leaf of becoming the newest Mormon fatality at the Mill site. I gave up the idea of a photo and made my careful way back to solid ground, grateful for my preservation.

Isaac Laney was living at the mill when the attack occurred. The reports of his preservation, like the Alma Smith account, present powerful evidence that even in the midst of a devastating tragedy, the Lord is still overseeing his Saints and his work.

Isaac Laney . . . was in the black-smith shop, when the mob began to fire on them. His gun stock was shot to pieces in his hands. He then escaped from the shop, ran to the mill, and climbed down one of the mill timbers into the creek. (James McBride, Autobiogragphy, typescript, BYU-S, p. 13-14)

But it was not simply a matter of running and getting away. Another source, quoting Wilford Woodruff, tells us of his flight from the blacksmith shop.

Brother Laney fled from the scene, but they sent a volley of lead after him, piercing his body in many places. He showed me eleven bullet holes in his body. There were twenty-seven bullet holes in his shirt, and seven in his pantaloons. His coat was literally cut to pieces. One ball entered one armpit and came out at the other; another entered his back and came out at the breast; a ball passed through each hip, each leg, and each arm. All these were received while he was running for his life; and, strange as it may appear, though he also had one of his ribs broken, he was able to outrun his enemies, and his life was saved. (Matthias F. Cowley, Wilford Woodruff—His Life and Labors, p.103)

He was wounded so badly that one man who saw him said “Brother Laney, do not deceive yourself by expecting to live, for no man ever lived after being shot as you have been.” (Matthias F. Cowley, Wilford Woodruff—His Life and Labors, p.416)

“I dreamed that a shower of serpents were all around me in the air. They were rattlesnakes and many of them bit me all over my body. I was told that if I would not fall down, but keep on running, they would not hurt me. When the shower of bullets came and they pierced my body, they did not hurt me any more than a scratch of a pin, although I looked at the mouth like an ox with its throat cut. I kept on my feet and continued to run until beyond the reach of the mob (Matthias F. Cowley, Wilford Woodruff—His Life and Labors, p.416).

Isaac Laney lived 35 years and one day more, passing away on Friday. October 31, 1873 in the 10th Ward in Salt Lake City (Andrew Jenson, Church Chronology, October 31, 1873).. And he knew where the credit went for those years, for he said some years before his death, “And so I am yet alive to the honor and glory of God, for it was by His power that my life was preserved.” (Matthias F. Cowley, Wilford Woodruff—His Life and Labors, p.416).