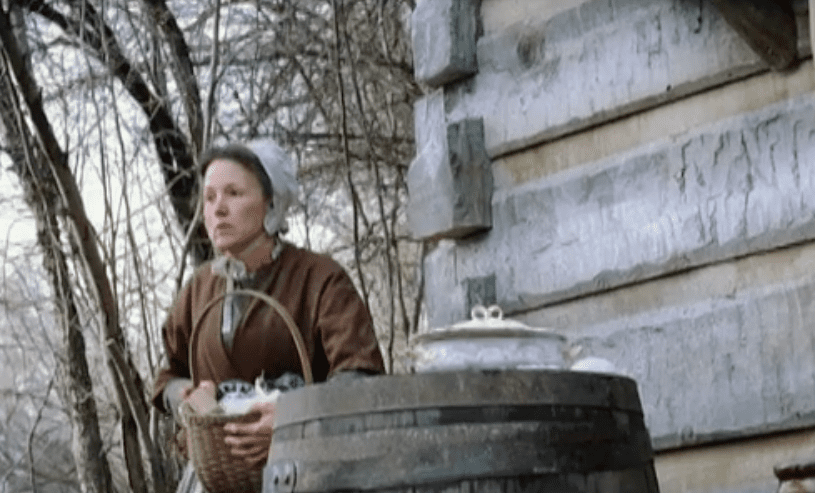 On October 30, 1838, the massacre at Haun’s Mill on Shoal Creek took place. From that event come a number of historical insights, insights about the inhumanity of man, and about the faith of the Saints, and about the love of God. Amanda Smith lost a son and a husband at Haun’s Mill, but she also got in touch with the power of the Lord in a most unusual way. This is her account of something that happened after the attack.

Emerging from the blacksmith shop was my eldest son, bearing on his shoulders his little brother Alma. ‘Oh! my Alma is dead!’ I cried, in anguish. ‘No, mother; I think Alma is not dead. But father and brother Sardius are killed!’ What an answer was this to appal me! My husband and son murdered; another little son seemingly mortally wounded; and perhaps before the dreadful night should pass the murderers would return and complete their work! But I could not weep then . . . The entire hip joint of my wounded boy had been shot away. Flesh, hip bone, joint and all had been ploughed out from the muzzle of the gun, which the ruffian placed to the child’s hip through the logs of the shop and deliberately fired. We laid little Alma on a bed in our tent and I examined the wound. It was a ghastly sight . . .

‘Oh my Heavenly Father,’ I cried, ‘what shall I do? Thou seest my poor wounded boy and knowest my inexperience. Oh, Heavenly Father, direct me what to do!’ And then I was directed as by a voice speaking to me. The ashes of our fire was still smouldering. We had been burning the bark of the shag-bark hickory. I was directed to take those ashes and make a lye and put a cloth saturated with it right into the wound. It hurt, but little Alma was too near dead to heed it much. Again and again I saturated the cloth and put it into the hole from which the hip joint had been ploughed, and each time mashed flesh and splinters of bone came away with the cloth; and the wound became as white as chicken’s flesh. Having done as directed I again prayed to the Lord and was again instructed as distinctly as though a physician had been standing by speaking to me. Near by was a slippery-elm tree. From this I was told to make a slippery-elm poultice and fill the wound with it. My eldest boy was sent to get the slippery-elm from the roots, the poultice was made, and the wound, which took fully a quarter of a yard of linen to cover, so large was it, was properly dressed . . .

I removed the wounded boy to a house, some distance off, the next day, and dressed his hip; the Lord directing me as before. I was reminded that in my husband’s trunk there was a bottle of balsam. This I poured into the wound, greatly soothing Alma’s pain. ‘Alma, my child,’ I said, ‘you believe that the Lord made your hip?’ ‘Yes, mother.’ ‘Well, the Lord can make something there in the place of your hip, don’t you believe he can, Alma?’ ‘Do you think that the Lord can, mother?’ inquired the child, in his simplicity. ‘Yes, my son,’ I replied, ‘he has showed it all to me in a vision.’ Then I laid him comfortably on his face and said: ‘Now you lay like that, and don’t move, and the Lord will make you another hip.’ So Alma laid on his face for five weeks, until he was entirely recovered—a flexible gristle having grown in place of the missing joint and socket, which remains to this day a marvel to physicians.

On the day that he walked again I was out of the house fetching [p.796] a bucket of water, when I heard screams from the children. Running back, in affright, I entered, and there was Alma on the floor, dancing around, and the children screaming in astonishment and joy. It is now nearly forty years ago, but Alma has never been the least crippled during his life, and he has traveled quite a long period of the time as a missionary of the gospel and a living miracle of the power of God. I cannot leave the tragic story without relating some incidents of those five weeks when I was a prisoner with my wounded boy in Missouri, near the scene of the massacre, unable to obey the order of extermination. All the Mormons in the neighborhood had fled out of the State, excepting a few families of the bereaved women and children who had gathered at the house of Brother David Evans, two miles from the scene of the massacre. To this house Alma had been carried after that fatal night. In our utter desolation, what could we women do but pray? Prayer was our only source of comfort; our Heavenly Father our only helper. None but he could save and deliver us.

One day a mobber came from the mill with the captain’s fiat: ‘The captain says if you women don’t stop your d——d prayer he will send down a posse and kill every d——d one of you!’ And he might as well have done it, as to stop us poor women praying in that hour of our great calamity. Our prayers were hushed in terror. We dared not let our voices be heard in the house in supplication. I could pray in my bed or in silence, but I could not live thus long. This godless silence was more intolerable than had been that night of the massacre. I could bear it no longer. I pined to hear once more my own voice in petition to my Heaven Father. I stole down to a corn field, and crawled into a stalk of corn.’ It was as the temple of the Lord to me at that moment. I prayed aloud and most fervently. When I emerged from the corn a voice spoke to me. It was a voice as plain as I ever hear one. It was no silent, strong impression of the spirit, but a voice, repeating a verse of the Saint’s hymn:

That soul who on Jesus hath leaned for repose,
I cannot, I will not, desert to its foes;
That soul, though all hell should endeavor to shake,
I’ll never, no never, no never forsake! (from “How Firm a Foundation”)

Amanda is my 4th great grandmother in a direct maternal line. I grew-up hearing this story, and sharing it in Primary talks. I was so excited several years ago when my grandmother shared with me her copies of Amanda's account of these events, written in her own hand, exactly as they appear in this article. I feel so blessed to come from a legacy of such faith. As a stage 4 breast cancer survivor I felt that same anguish while going through treatments, needing direction and not knowing where to turn but to the Lord. I have often felt Grandma Amanda near, and have so loved getting to know some of the many, many cousins who have connected through the Facebook page Amanda Barnes Smith Family. She has left us all an unflagging example of faith and endurance amid heartache and trials.

I shared this with my neighbor, whom I previously mentioned, and found out that there are many variations on the story of Amanda. For her master's theses she is comparing all of them and perhaps come to some interesting conclusions! I did not know that there are various accounts, as it such a well known incident in church history.