The Hazards of a Home Near Sodom | Meridian Magazine 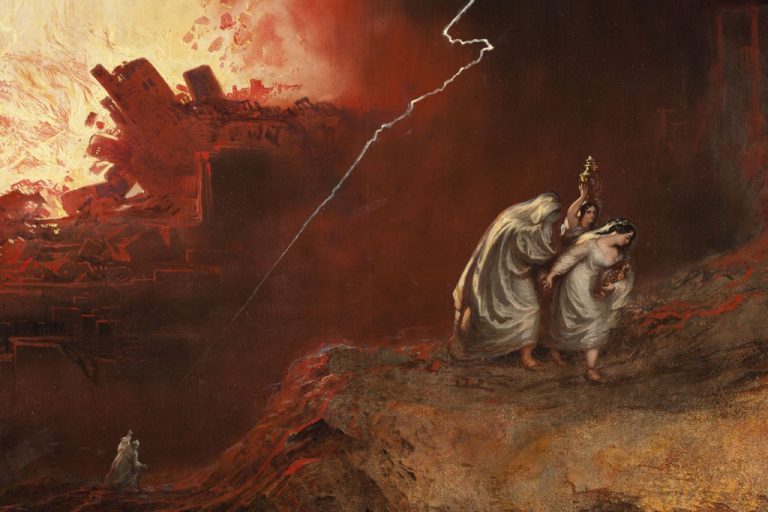 The Hazards of a Home Near Sodom

Abraham tried to save Sodom. When he was told that the Lord intended to destroy the city “because the cry of Sodom and Gomorrah is great, and because their sin is very grievous” (Genesis 18:20), Abraham bargained with the Lord: “And Abraham drew near, and said, Wilt thou also destroy the righteous with the wicked?” (Genesis 18:23).

The Lord agreed to spare the city if fifty righteous could be found. Abraham’s concern probably grew in part from his awareness that his nephew, Lot and his family were living in Sodom. They had not always lived there. At first they were just in the neighborhood.

When Abraham and Lot divided the land of Canaan, Abraham stayed in the rocky hills of upper Canaan, but Lot pitched his tent toward Sodom in the Jordan River Valley (see Genesis 13:12). It is almost possible to hear the conversation between Abraham and his nephew about the location of Lot’s tent.

“Lot! You are a member of the covenant people of Jehovah. Why would you pitch your tent toward Sodom?”

We know how Lot would respond.

“Uncle Abraham, I’m not in Sodom. I’m just close by. It is nice to have a city nearby in case I need some groceries or medicine, or if I want to attend a concert with my wife and daughters. But I’m not in Sodom.”

Lot had no business living anywhere near Sodom. When he first moved to the area he did not live in town, he simply pitched his tent “toward Sodom.” (Genesis 13:12). But now he lived in Sodom. Why he relocated I cannot guess, except to observe that rampant wickedness is almost magnetic, drawing in those who get too close.

But the Lord’s promise to spare the city for fifty righteous was not sufficient to alleviate all of Abraham’s concerns. He still worried about his relatives. He asked what would happen if there were five less than fifty righteous, and the Lord agreed to spare Sodom for forty-five righteous–then for forty and thirty and twenty and, finally, He agreed to spare the city if there were only ten righteous people living there. Whereupon Abraham went home–happy, or at least confident. He must have believed that he had just saved the city and Lot’s family. After all, Lot had at least two married daughters and a son and at least two grandsons (his “son’s sons” according to Genesis 19:18, JST), and he had two unmarried daughters. Do the math. Lot’s family, as a minimum, had eleven members. They would be righteous, wouldn’t they? Abraham must have believed that his relatives were safe.

Three angels visited Abraham and announced the imminent destruction of Sodom and Gomorrah (Genesis 19:1, JST verse 15 and other places say they were “holy men”). When they got to Sodom, Lot tried to protect them within his own walls from the iniquity that awaited them in the streets. But it was hopeless. The citizens of the city, even the men of Sodom, compassed the house round, both old and young, all the people from every quarter . . .” (Genesis 19:4), and demanded that Lot produce the visitors and deliver them for the Sodomite version of the Welcome Wagon, which apparently included involuntary homosexual activity. “Wherefore they said unto [Lot], We will have the men, and thy [unmarried] daughters also; and we will do with them as seemeth us good. Now this was after the wickedness of Sodom” (Genesis 19:11,12, JST).

The angels had seen enough. They warned Lot to gather his family and flee, but most of his family was unwilling to leave. In fact there were not ten righteous in town. Only three left with Lot’s wife and his two unmarried daughters. And they did not leave without significant encouragement: “And while he lingered, the men laid hold upon his hand, and upon the hand of his wife, and upon the hand of his two daughters; the Lord being merciful unto him: and they brought him forth, and set him without the city” (Genesis 19:16).

The actions of these holy men delight me.

Lot and his wife were reluctant to abandon their family, and perhaps their property. These messengers might have left them to their fate. But they did not. They took them by the hands and brought them out the city. Often the simple act of delivering a warning will not be enough. It is a wonderful thing to take people by the hand and help them do the right thing. I hope all of us have the courage to take loved ones and neighbors by the hand and lead them to safety. President McKay illustrated this with the following account.

Many years ago there was a story told in one of our early school books about some young people who were sailing down the river towards Niagara Falls. A man on the shore cried out to them: “Young men, Ahoy, the rapids are below you!”

But they heeded not his warning call until they realized too late that they were in the midst of the rapids. With all the power at their command they failed to turn their boat upstream, “So,” said the man who tried to warn them, “shrieking and cursing, over they went!”

The lesson left an indelible impression upon me, but today it seems incomplete. It is one thing to stand on the shore and cry, “Young men, Ahoy ‑‑ there is danger ahead,” and it is another thing to row into the stream, and, if possible, get into the boat with the young men, and by companionship, by persuasion, by legitimate force, when necessary, turn the boat from the rapids. Too many of us are satisfied to stand on the shore and cry, “There is danger ahead.” (Conference Report, April 1964, pp.3-4).

What a blessing it is to have people who love you enough come to your rescue: to take the hand and lead you in correct paths! I attended a seminary graduation for one of my sons in 1995. My wife and I got there early enough to sit just behind the graduates, who occupied the front 10 or 15 rows. There were hundreds of them. When the principal spoke, he asked various groups of students to stand. “All of you who have had perfect attendance this year, please stand.” Several arose and we clapped. “All of you who have had perfect attendance for four years, please stand.” Some stood. We clapped some more. “All of you who have read the scriptures every day this year, stand up.” A lot of graduates stood. We clapped a lot. “All of you who have not missed a day of reading the scriptures in four years, please arise.” Four seminary students stood up. We gave them a standing ovation.

Finally he asked all those who would serve missions within five years to stand up. As I mentioned, we were behind the final row of seniors, and directly in front of us were three young men. When the principal asked this question, the two outside boys stood. The one in the middle remained in his seat. This drew my attention because I was there watching and because hundreds seemed to be standing. But my attention was on the boy sitting in front of me, and on his friends who were looking at him. They regarded him for a few seconds and then looked at each other again. Almost as if it had been choreographed, they reached down, grabbed an arm each and lifted him to his feet. The Spirit touched me in that moment and bore witness to me that that boy would serve a mission because of the influence of wonderful friends.

Lot and his women were led from town and told to flee, and to not look behind them. Lot’s wife looked. Luke 17:31,32 seems to suggest that she went back. If she did, that would make the story of the salt pillar more logical. Some experts believe that the location of Sodom is now beneath the southern end of the Dead Sea. I have a picture of pillars of salt standing in the water at that area, fashioned from the mineral content of the Dead Sea. The sins of Sodom seem to have cost Lot his wife. And his daughters had problems too:

The account of such calamities is congealing. Lot could have pitched his tent anywhere, but something about the civilization of Sodom enticed him.

Our faith and commitment are tested when the world offers tempting and enticing alternatives that can turn our faces from the Lord’s kingdom. Some would like to live in that eternal city and still keep a “summer home” in Babylon. If we are not consciously and deliberately choosing the kingdom of God, we will in fact be moving backwards as the kingdom of God moves forward . . . (Sharon G. Larsen, “Agency—A Blessing and a Burden,” Ensign, Nov. 1999, 12).

What a price Lot paid when he decided to pitch his tent where a sludge of suffocating evil could infect his family! Lot seems to have spent too much time lounging in the den of his summer home in Babylon.

Many years ago I made the decision to not buy a TV set. I had seen the increase in evil influences in programming between the time that I left on my mission and when I returned. Programs that my parents were watching had been subtly changed and they had not seen the difference. When I went back to college, I didn't have the money for a set, but I didn't miss it. Now I see what having a TV continually in their home has done to my sister and her family and I regard it as a poison as bad as internet pornography. The people who control content on TV are in service to Satan and it shows clearly if you want to see it.

Thank you for this article! Sadly we sometimes not only live IN Sodom, we invite the influence of Sodom into our very homes. It is becoming increasingly difficult to find entertainment that does not depict and even glorify promiscuity, infidelity, violence, blasphemy, and every type of vile sin one can imagine. We see evidence that we truly live in the last hours of the last days. Thank the Lord for a living prophet, inspired leaders, the scriptures, and personal revelation.