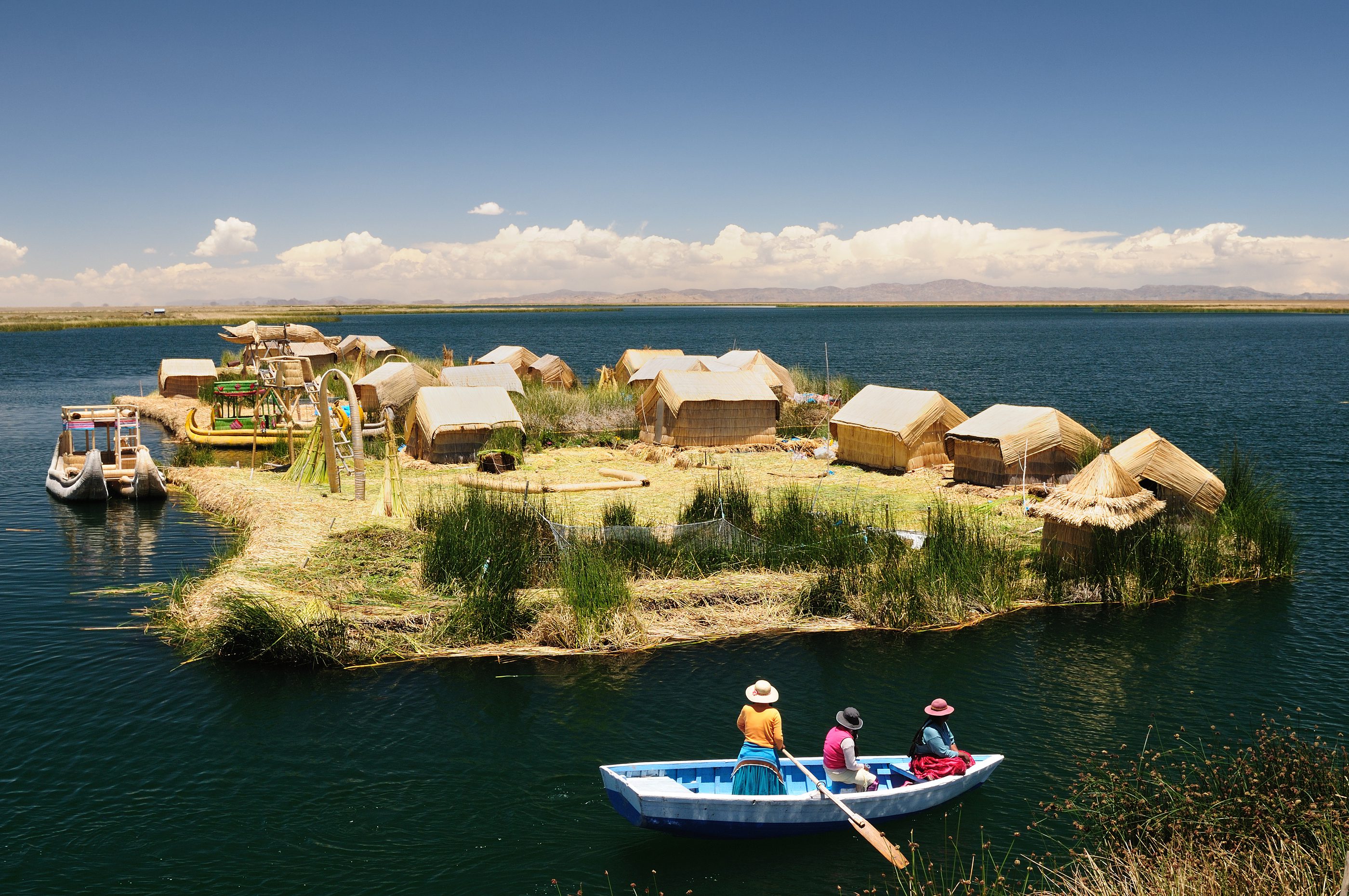 The Floating Islands Of Lake Titicaca

We toured lots of old ruins while traveling through Peru, but I much preferred the opportunities to actually see how the people lived. So the morning we were to go to the Floating Islands of Lake Titicaca, I was up early, ate breakfast, and then sat down to reread the material about the islands. The book told about the inhabitants’ primitive life style, and how, in the midst of our fast paced world of technology, stepping onto the islands was like stepping into life as it was a few thousand years ago.

Lake Titicaca sits high in the Andes Mountains. We stayed in a city named Puno that was on the edge of the lake. The elevation there was more than 12,000 feet, and many of our group were suffering from altitude sickness and had to stay at the hotel near oxygen. As the rest of the group gathered, I put aside my reading and excitedly prepared to step into this ancient culture.

We made our way to the dock where the boats we had chartered were tethered. We were not divided among the boats by numbers, but by weight, because each island could only bear a certain amount. The boat I was in soon pulled away from the dock and motored out into the open water, while the other boat went a different way to a different island. The water near the city was full of pollution, but as we traveled farther away, the water became cleaner and bluer.

We traveled for quite some time, and eventually we entered an area where the lake was shallow. This area was full of reeds, many with birds nesting in them. I wondered how a person could know where to go. When I asked the man who was driving the boat, he shrugged. “I know the lake well,” he said, “and I just drive to where the island was last time I was there.”

He laughed. “When a big wind comes up, even though the islands are anchored, they can move miles away. When that happens, I just go in the direction the wind was blowing until I find them.”

When we finally pulled up to the island, I could hardly wait to step onto it. When I did, it was a singular sensation. It was like stepping onto a waterbed made of reeds. The feeling is hard to describe.

We looked at how they cooked food in clay cook stoves built to insulate the heat away from the reeds. They showed us how they added more reeds to the top of the island while the ones on the bottom gradually rotted away. Through an interpreter, they told us they lived mostly on fish and birds from the lake, along with money from tourists.

On this particular island there were five small reed huts, each about ten feet by ten feet in size. I asked if the island’s occupants were all members of the same family. An old Peruvian shook his head. He said they got along better if they weren’t related, so as children grew older, they would often find a different one to live on, or start their own.

For a price, those living there would tell or show us anything we had an interest in, so I motioned that I would like to see what one of their huts looked like on the inside. One of the younger men held out his hand and said, in broken English, “For dollar.” I pulled out a dollar and handed it to him, and he led me into his hut.

There were only two pieces of furniture in it. One was a small, two-person couch made of reeds. The other surprised me more than I can say. It was a good-sized television.

“Television?” I said in surprise. He grinned and nodded. “But how?” I asked.

He motioned for me to follow him. We stepped outside, and he pointed to his roof. There, disguised by reeds, I saw a television antenna and a solar panel.

He slapped me on the back and proudly said, “This year, T.V. Next year, Internet.”

I had always wondered what technology was like a few thousand years ago.

We visited those same islands - very unique and interesting. Although, I came away with the impression each island is a family tourism business and they all go to their home in the city each night, and back each morning before the tourists arrive.