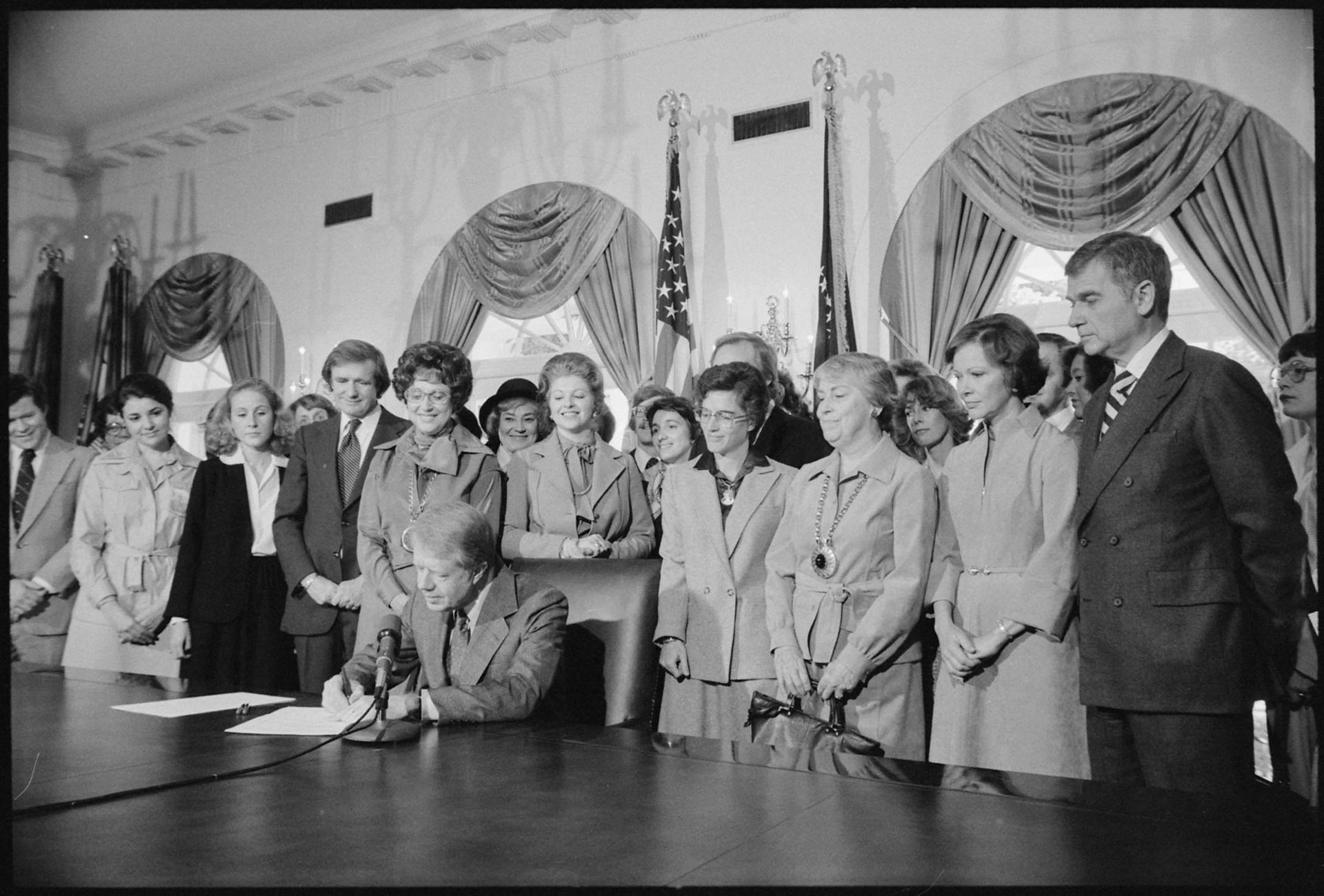 The Equal Rights Amendment – Not Dead and Still Dangerous

On her first day of work, Amelia Bedelia, the main character in the Amelia Bedelia children’s book series, begins her labor by baking a lemon meringue pie because she would like to surprise her new employers, and, says Amelia, “I do make good pies.” Amelia then tackles her list of chores: change the towels in the green bathroom; dust the furniture; draw the drapes when the sun comes in; put the lights out; measure two cups of rice, etc. It sounds all so straight forward, and Amelia does just as she is told: she uses scissors to make changes to the towels in the green bathroom; sprinkles the furniture with dusting powder; sketches a lovely picture of the drapes as the sun comes through the window; takes the lightbulbs from their lamps and puts them outside; and uses a tape measure to determine the length of the rice.

The Amelia Bedelia stories point out the errors that come when others use words in ways different than what we intended. When it comes to laws and public policy, those alternative meanings often lead to something called “unintended consequences.” Usually we attribute those unintended consequences to decision-makers and legislators not understanding the ways in which the language in their documents can be misinterpreted and misused. But what if those policymakers know exactly how that language will be implemented and it is “we, the people”, who are, like Amelia Bedelia, misunderstanding the intent of language? This is precisely the problem we face with the resurrected Equal Rights Amendment, or ERA.

The ERA is like an old black-and-white horror film without any of the charm. You thought it was killed off in 1982 when the Supreme Court ruled that the 1979 ratification deadline had passed without the requisite approval of three-quarters of the states, but, no, like Frankenstein’s monster, “it’s alive!” Perhaps it is more accurate to say that in the hearts and minds of the amendment’s proponents, it was never dead, just in a state of limbo, waiting for the right circumstances to wreak havoc on an unsuspecting crowd.

On its surface, the Equal Rights Amendment appears to right a terrible wrong. The language of the Constitution of the United States failed to equally defend the rights of blacks and women. The 13th and 14th Amendments to the Constitution corrected that for African-Americans, but women still needed additional legislation to correct injustices when it came to property rights, voting, issues of autonomy within family and marriage, as well as  equal treatment in various aspects of business, employment, and financial dealings. This legislation was addressed piecemeal on a state-by-state basis. The 19th Amendment remedied the issue of suffrage on a federal level, but many felt that an additional amendment was needed to guarantee other rights denied women.

Following the successful fight for women’s voting rights in 1921, Alice Paul, a leader of the National Women’s Party, proposed an amendment that she felt would ensure equality for women. The original ERA stated: “Men and women shall have equal rights throughout the United States and every place subject to its jurisdiction.” Just like the modern Equal Rights Amendment, however, Alice’s proposal met with opposition, even from fellow suffragists. Some felt that it would actually harm labor protections for female workers.

Due to labor and Progressive movement resistance, the ERA floundered until the 1960s when second-wave feminists took up the cause. It was rewritten and reintroduced in 1970 as follows:

Section 1: Equality of rights under the law shall not be denied or abridged by the United States or by any State on account of sex.

Section 2: The Congress shall have the power to enforce, by appropriate legislation, the provisions of this article.

Section 3: This amendment shall take effect two years after the date of ratification.

Congress, with broad bipartisan support, mustered the two-thirds approval for the modern Equal Rights Amendment, and the states were well on their way towards ratification when they faced stiff conservative opposition spearheaded by Phyllis Schlafly. (United Families International was also part of the coalition opposed to the ERA.)

At the time, resistance focused on four main concerns: the amendment does not allow congress to make exceptions for women; the vagueness of the amendment’s language would leave it open to interpretation that could strip women of legal protections; it would harm our system of dual-federalism and leave intent up to the courts, encouraging legislation from the bench; and all moderating language had been defeated during the legislative process, ensuring that courts would use those defeats in defining intent.

Given those concerns, the fear was that the Equal Rights Amendment would end up harming women by, among other things, forcing the inclusion of women in military drafts, requiring that they serve on the same basis as men, stripping women of financial protections in case of divorce, and depriving women of privacy rights.

There are a host of laws that fall under the jurisdiction of the states. The ERA would remove those legislative powers from the states and transfer them to the federal government. So, for example, laws that address issues between the sexes, such as marriage and family, would be controlled by congress, executed by the federal government and interpreted by federal courts. One of the strengths of dual federalism is the ability of states and localities, made up of diverse groups of people, cultures, and traditions, to address the unique needs of their citizens. Opponents feared that the ERA would severely harm the states’ ability to do this.

Because of the amendment’s vague wording, opponents argued that the meaning of the law would be left up to courts. Courts would be given the power to, in essence, legislate, giving meaning and authority to the amendment not contemplated by its authors nor the citizens or representatives responsible for its passage. The implications are hair-raising. Some of the possible negative outcomes were discernable at the time of ratification by examining the moderating amendments that were defeated during the legislative process.

Amendments that protected women from compulsory military service, recognized the special standing of wives, widows and mothers, reinforced the responsibility of fathers to financially provide for their children, secured privacy for and between men and women, and protected the integrity of prosecution of sexual crimes. The courts would use these defeated amendments in interpreting the meaning of the law.

What passage of the ERA will mean for us today

One concern that opponents of the ERA in the 70s share with today’s opponents is the effect it will have on abortion rights. In testimony to the Senate Subcommittee on Constitutional Amendments, attorney Sarah Weddington who represented Jane Roe in Roe v. Wade, said regarding the ERA, “It seems to me that what the ERA is all about is trying to say that women should have full choices about how their lives are spent and what their life’s plan is. And yet, when you say to women, ‘we will give you all those choices through ERA, but if you become pregnant, you must go through pregnancy,’ we are in essence denying them the benefit of the equal rights amendment.”

Today’s supporters of the ERA argue that any limitation on abortion would be a violation of the amendment and a form of discrimination towards women. Columnist Alexandra DeSanctis has noted that “when the giants of the abortion industry insist that Congress use taxpayer dollars to fund abortions, they will come carrying a copy of Madison’s founding document. Every demand…will suddenly have behind it the imprimatur of the U.S. Constitution.”

In addition to the threats to our system of dual federalism and the dangers that will surely come as the courts are used to define such a vaguely worded document, the ERA will perpetrate considerable harm on women by overturning laws that benefit them, such as: workplace accommodations for pregnant women and women who do manual labor; government programs such as Women, Infants and Children; social security benefits based on a spouse’s income for stay-at-home mothers; and protections for women in areas of divorce, alimony, and child support.

The proposed Equality Act would replace the word “sex” in federal legislation with the phrase “sex (including sexual orientation and gender identity).” What exactly would that mean when it comes to the Equal Rights Amendment? As Texas A&M professor, Valerie Hudson, has pointed out, “We women have already discovered that if our sex-based rights are in conflict with the rights of others based on gender identity, we are too often thrown under the bus. Does the Equality Act turn the ERA into a Trojan horse for women, actually serving to erase them completely within the U.S. constitution itself?” If this is indeed the case, the ERA will be the means of obliterating the equality for women that it sought to advance.

It is unclear what will happen when the ERA is ratified by the 38th state needed to reach that three-fourths requirement. While proponents have been tallying up the states that have passed the Equal Rights Amendment after the deadline for ratification expired, five other states, Nebraska, Tennessee, Idaho, Kentucky, and South Dakota, have rescinded their ratification of the amendment. Representative Doug Collins has stated that Congress “doesn’t have the constitutional authority to retroactively revive a failed constitutional amendment” and that the country must “start the whole process over and make [the] case to current voters nationwide.”

Alexandra McPhee, director of religious freedom advocacy for the Family Research Council, also discounts the notion that Congress can pass the ERA 50 years after it failed: “Congress reasonably imposed this deadline because a lot can happen in five years, and even more in a lifetime. The deadline was binding enough when the ERA thought it would win. Now that it has lost – twice – proponents argue that the rules need not apply.” That, however, is not stopping the Democrat controlled house. On November 13, 2019, the House Judiciary Committee voted to remove the time limit for ratification of the Equal Rights Amendment and send the amendment to the full House. One thing is for certain, this will all end up in court.

The ERA – harmful to women, families and society

The supporters of the ERA claim that opponents do not believe in full equality for every American, but that is a rhetorical sleight of hand. The inequities that motivated Alice Paul to advocate for an Equal Rights Amendment are gone. Women today enjoy all of the rights and protections she sought. Thank goodness! And we are grateful for the women, and men, who worked to make that a reality. However, in Alice’s world, it was unfathomable that females would be forced into combat, or that abortion on demand at every stage of pregnancy would become a rallying cry for women’s rights, or that men, assisted by drugs and surgery, would claim hard-won, protected female space.

That is a consequence of the passage of time, an evolution in culture and the mutable nature of language, and it is the tip of the iceberg of regret that women will live with should the Equal Rights Amendment become a part of our Constitution. Like the Amelia Bedelia story, we will feel the effects of language misused and misunderstood. Unlike Amelia Bedelia, there will be no metaphorical lemon meringue pie to assuage the damage done to women, families and society.