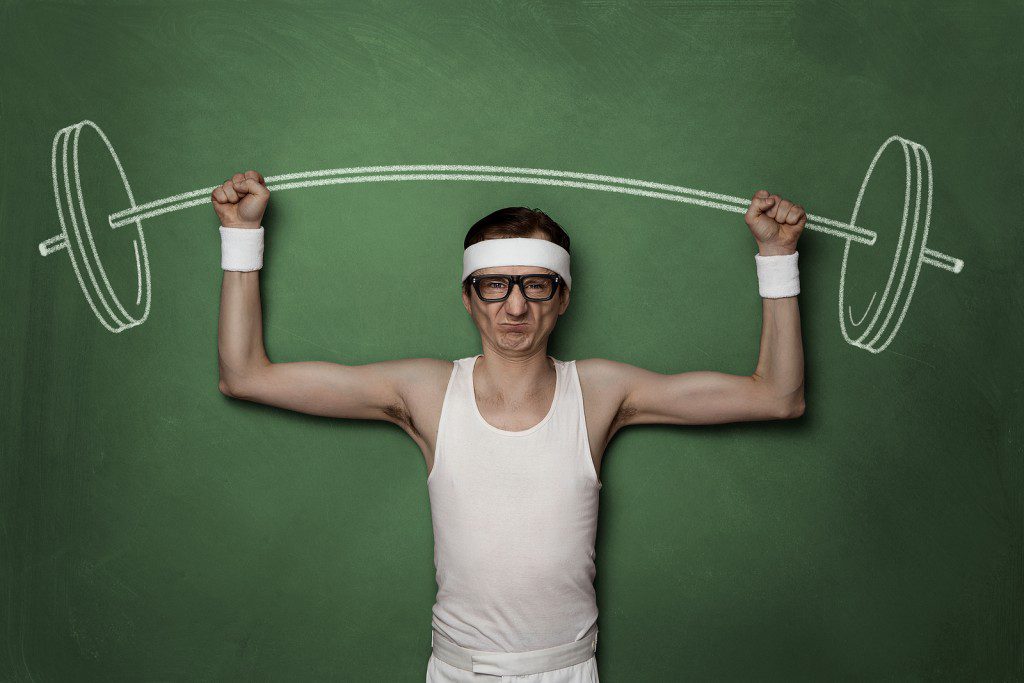 The following is part two of a story. To see part one, click here.

Rod considered himself the best ladies’ man in the high school, and he decided to prove it. He claimed he could turn Dennis, the school nerd, into a social Duan Juan. Lenny was foremost to express his doubt, but we were all interested in the experiment.

The first thing Rod did was to get Dennis to lift weights. Rod convinced Dennis that he needed muscles and that girls liked the smell of sweat. We had our reservations, but after a couple of weeks of waddling sorely into class, Dennis’s physique did seem to be changing slightly.

“Hey, Dennis,” Lenny said, “is there actually a muscle where your biceps are or is that just a nasty pimple?”

Dennis grinned. “I have gone from benching thirty pounds clear up to fifty. See?” With that, he flexed his biceps.

Lenny slapped Dennis on the back. “You’re right. It’s slightly bigger than a pimple.”

I had to admit that Rod’s coaching seemed to be working. With the added muscle, Dennis was also gaining confidence, and the confidence was more important than the muscle.

Rod decided it was time to work on Dennis’s conversation skills. “Okay, Dennis,” Rod said, “let’s pretend I’m a girl and you want to talk to me. What are you going to say?”

Lenny spoke before Dennis could. “What I would say is that you are one ugly girl.”

“Buzz off,” Rod said to Lenny. He then turned back to Dennis. “Okay, give it a try.”

Dennis thought for a moment, and then he smiled as an idea obviously came to him. “What do you think about the quadratic formula in algebra? Pretty cool, huh?”

Most of the guys rolled their eyes, and Rod just shook his head.

“Look, Dennis,” Rod said, “you’ve got to talk about what the girl is interested in.”

“But I don’t know what girls are interested in,” Dennis replied.

“Then just do this. Let her do the talking, and you just agree with her. Let’s try it. Okay, so pretend I’m the girl and I say, ‘It’s a beautiful night for a walk.’”

They practiced again with Rod saying something and Dennis agreeing with the statement. As they continued to practice, Lenny sidled up to me. “I’ll bet you your dessert from lunch that this is going to end badly. Girls never think or say what you expect them to.”

I had to agree, but still, I couldn’t help but take the bet, especially as I watched Dennis pour his whole heart into his training.

Rod continued to have Dennis lift weights and practice the phrase and agreement process at every lunch hour. We were all ready to see Dennis make his attempt, but Rod wasn’t taking any chances. He planned to try out every phrase he thought a girl might say and make sure Dennis’s responses were perfect. Finally, after a couple of weeks of practice, Rod could think of no new phrases, and Dennis was hitting the ones thrown at him spot on. I was even beginning to think I might win Lenny’s dessert.

The big day finally arrived, and Rod made sure Dennis’s hair and clothes were aligned. Dennis then walked across the cafeteria to Missy, the girl he hoped to ask on a date. The rest of us tried to act like we were nonchalantly eating as we watched. It all seemed to be going well for Dennis, and he and Missy were even eating lunch together. Rod was grinning, sure of his success, when Missy suddenly slapped Dennis, knocking his glasses off, and causing him to drop his lunch tray. Janitors scurried to clean up the mess, and Dennis hurried back to our table.

“Well, I agreed with her on everything like you taught me. But then she said something we hadn’t practiced.”

“Did you agree with her on it?” Rod asked.

“What did she say?” I asked, as I reluctantly handed Lenny my cinnamon roll.

“She said, ‘I think these school lunches are making me fat,’” Dennis replied.

Ouch! But hysterical laughter at the same time!