The Amazing Touch and Intervention of Angels | Meridian Magazine 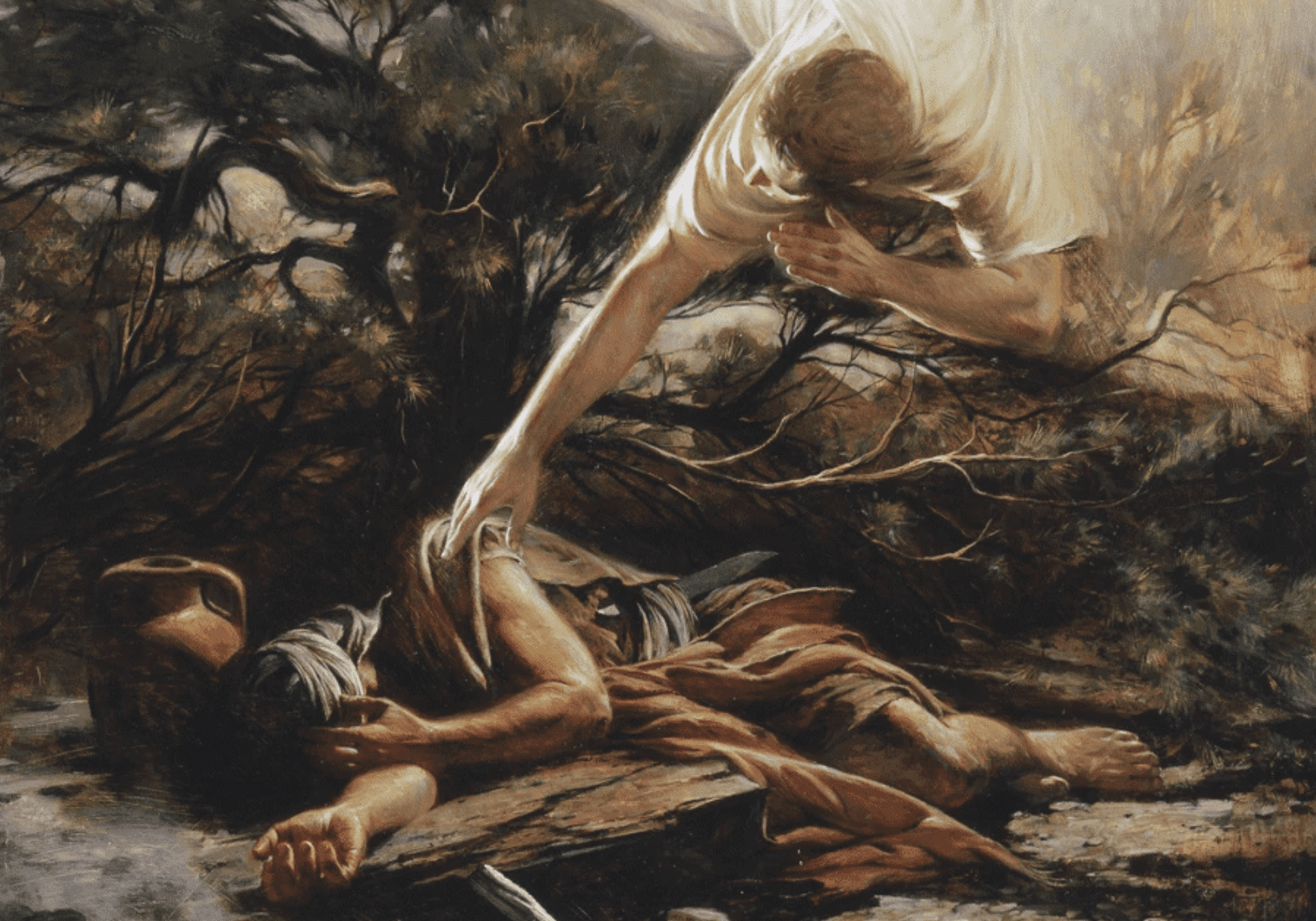 The Amazing Touch and Intervention of Angels

Angels are allowed to touch us in so many ways.  When they intervene, they strengthen our faith and understanding of God’s love and purpose for us. In this article I want to share five inspiring stories of angels interacting physically with people who desperately needed their help…

Håkan Palm, a man from Sweden, shared an extraordinary experience with me where angels interacted with him AFTER a very bad accident in November of 2018.  Notice how tangible and physical the angels were with him. He writes:

“I was riding my racing bike on a narrow road in the Canary Islands. I sped on my racing bike in the last bend on the road towards Arguineguin. A car rapidly came in front of me, passed and suddenly decelerated.  I was forced to brake my bike hard to avoid a collision. My rear wheel turned up in the air and I was thrown over the bicycle handlebar.  From a height of about 5 feet, I saw the inevitable coming.  I met the asphalt headfirst!

“The pan part of my helmet struck the street first, and then my nose hit the asphalt. My neck whiplashed at a horrible angle, and I knew it was bad.  The weight of my body pressed to my head, and I became motionless lying on my back. The driver of the car did not even notice what happened and continued his journey.

“Right after it happened, I opened my eyes and I saw three men in white shirts crouching over me on the street… They took the back of my head in their hands and gently rocked it up and down about an inch. I felt their fingers on my head. One of the three expressed something in a language that I didn’t understand.  When the man stopped talking, they carefully placed my head back on the street.  One of them looked me in the eyes and twice said in a language I then understood:

“The men conveyed to me that they had called an ambulance. When they got up, I could now see them from knee height and upward.  They were completely dressed in white. As the ambulance arrived, the three men disappeared. I was transported to a hospital within minutes.

“In the hospital, the doctor found NO DAMAGE to vertebrae or other skeletal parts. I could have been killed by the accident, but I am convinced that the three men were angels, who in a heavenly language gave me a healing blessing, called an ambulance and then departed.”[1]

Håkan received a blessing of angels that he will never forget.

Shakayla Wilkes recently told me about two marvelous angelic experiences she had on a road trip when she was 11 years old.

Her mom had dropped off three male family members at scout camp, and then began driving to their next destination that night.  They had bought a GPS to help navigate, but it wasn’t working, and they became hopelessly lost, driving around for hours.

Finally, at 3:00 a.m. (in the middle of nowhere), Shakayla’s mother noticed a rest stop and pulled over.  She was beyond exhausted and frustrated with three young daughters in the car all needing a place to sleep.  She sent Shakayla to check out if there were any road maps there to help them navigate.

Shakayla got out of the car and began praying,

“Heavenly Father, I’m not sure if you exist, but I can’t go back empty handed to my mom!

She looked at the shelves where road maps were kept but they were completely empty.  She couldn’t go back, so she kept praying.

“Heavenly Father, I don’t know what to do!”  If you really care about me, please help us!”

3-5 minutes later, a miracle happened.  A semi-truck suddenly pulled up and a man hopped out, stocked the shelves with maps and then immediately left. It took only a matter of seconds, and he was gone.

What are the chances that someone would come to restock maps at 3:00 a.m. but do nothing else?  Shakayla grabbed one of those maps, knowing that it had been delivered by an angel, and gave it to her mother. With that map they were able to navigate where they needed to go.[2]

President Ezra Taft Benson made a beautiful promise to children. He taught,

“I promise you, dear children, that angels will minister unto you… You may not see them, but they will be there to help you, and you will feel of their presence.”[3]

At the end of the week, they headed back to scout camp to pick up their family members. On a narrow mountain road, Shakayla’s mom realized that she was going the wrong direction. She tried to turn around, but the car got stuck perpendicular to the road.  If she moved forward, she might go off the cliff, so she was stuck.

Her mother panicked fearing that a car could come around the bend in either direction and plow into their vehicle.  The only thing that could help them was if someone could unstick the car by lifting it up to swing it around.

Shakayla fervently prayed with faith in this urgent situation,

“Heavenly Father, give me strength to take care of this!  I know you helped me last time, and I know you’ll help me again!”

Right after her prayer, this 11-year-old got out and actually lifted up the car and began to move it.  She said,

“The car felt light, and I was able to flip the car around so that it could be driven down.”

Shakayla absolutely knew that angels helped her lift the car and move it where it needed to be.[4]  Her experiences remind me of a scripture where Nephi speaks about angels supporting him.  He said,

“And by day have I waxed bold in mighty prayer before him; yea, my voice have I sent up on high; and angels came down and ministered to me.” [5]

Those experiences during her road trip provided Shakayla direct answers to her prayers and brought about the foundation of her faith as they did Nephi.

Elder Ware, a missionary in Brazil, gave a remarkable account of angelic aid he had in transporting a stove up a narrow Brazilian staircase.  He wrote,

“When we arrived [at the new home], we began to unload immediately the heavy things.  Although we had decided to unload the heavier items first, we had left an oven aside [to carry later]. We were pretty exhausted from our labors, but somebody had to do it, so I decided that I could take the six-burner oven by myself up the stairs to the new apartment.  I knew that it wouldn’t be too heavy for me to lift by myself.  I started up the stairs and felt a little exhaustion, as I had already carried many things up to the apartment.

“I made it to the second flight and continued on to the third.  It was on my way up the third flight that my testimony grew a lot.  With an exhausted back and legs, and sweatier palms than a wet sponge, I made it about four steps and then suddenly lost my balance on the next step because the oven was getting very heavy in my arms and my body was tired; additionally, the tread depth of the stairs was quite shallow, which is no problem for the Brazilians, but for us large-footed Americans, it certainly can be a problem, [Elder Ware had size 14 shoes).  He continues,

“Suddenly I lost my balance and started falling backwards.  There was nothing I could do as I had already passed beyond the point of recovering my balance.

“It was then that a warm feeling rushed by me and through me and I, to my astonishment, felt a gentle push that saved my balance by falling forward—but only a little.  I knew in this moment what had happened and that I had received some heavenly help.  I will never forget this as long as I am living.”[6]

Elder Ware could have been seriously injured if he had fallen down steep concrete stairs with an oven dropping on top of him.  He knew that an angel’s little shove had saved him.

Angels touch us in so many ways.  Sometimes their physical touch is more of an embrace, a way to touch us emotionally and spiritually.

Many years ago, I had a dear friend whose husband had just died leaving her with ten children- all still at home, and in desperate need of her care.  What a terrible burden loomed over her.  I felt prompted to invite her to come to the temple with me at that time of great need.

While I was in there, at a pivotal moment, I suddenly felt a beautiful warm feeling in my heart that spread to my entire being in a very physical way for several seconds, and I had the sacred sense that I had just received a spiritual hug from my friends’ deceased husband thanking me for being there with his grieving wife.

It was a profoundly beautiful experience that I will always cherish.

Håkan, Shakala, Elder Ware, and I were each touched by angels in distinctive ways; (healing touch, super human strength, gentle push or emotional embrace). We discovered firsthand that when angels intervene, they strengthen faith and understanding of God’s love for us.

These are wonderful inspiring stories. Thanks so much for sharing. Love Sarah Hinze