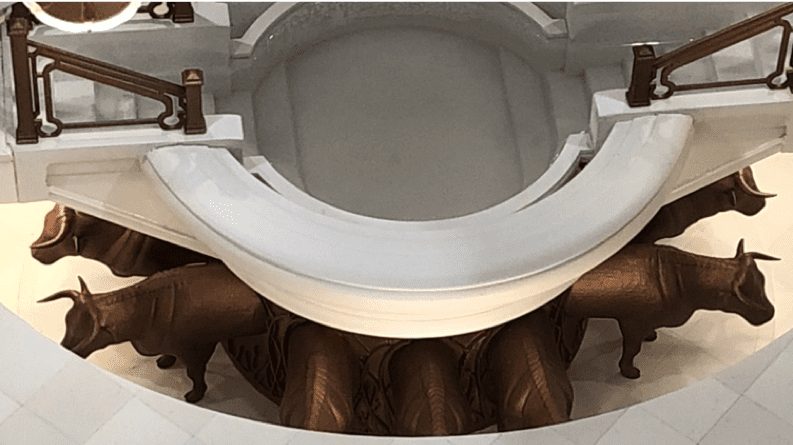 “Why do you have cows in your basement?”

I was, at first, taken aback by the question but then chuckled with amusement.  “That is a good question,” I remarked, “How many do you see?”

He counted, and then looked more carefully until he could estimate questioningly, “twelve?”

“Did you know that twelve was a Hebrew number meaning ‘government’ or ‘authority’? For example, twelve apostles, twelve tribes, etc.?”

I corrected him, “Those are oxen, but any male horned animal could have been used.  As sacrificial animals, they represented Jehovah.[1]  Do you believe that baptism is vital as the entrance ordinance to God’s kingdom?”

“I am Christian. Yes, I think that Christ taught that it was essential,” he replied cautiously.  We remembered John 3:5 together:

“Jesus answered, Verily, verily, I say unto thee, except a man be born of water and of the Spirit, he cannot enter into the kingdom of God.”

“The language of the temple is symbolism; so, putting those facts together, can you see that the portal ordinance to the kingdom of God sits on the government of Jehovah?” I asked.

He nodded; so I asked, “Since baptism is the entry door to God’s kingdom, and he loves all His children, why is it that less than 8% of the 110 billion people that have been born on the earth have ever heard of Christ or baptism?  Shouldn’t God, in His justice, provide a way for all his children to be baptized?”

“I had never thought of that,” he exclaimed.  “Either baptism isn’t that necessary, or there must be another way provided?”

“For for this cause was the gospel preached also to them that are dead, that they might be judged according to men in the flesh but live according to God in the spirit.”

“That provides for all His children to receive the gospel truths, but what of the gospel ordinances?”  We turned to 1 Corinthians 15:29 and wondered at the meaning of “baptism for the dead.”

Then I pointed to the font and shared that the purpose of that font was ancestral and an evidence that God loves all His children!  Can a church that does not provide the required ordinances for the ancestral majority of God’s children really be Christ’s church – a Christian church?

He had other meaningful questions that led to some serious teaching; so, when he left the center with a Book of Mormon, he promised to read.  I tried to set up a teaching appointment with the missionaries, but he was cautious and promised to return.

A group of youth came in all wet from doing baptisms in the temple.  I found them standing and just staring at the temple model baptismal font.  It was my turn; so, I asked, “why are there cows in the basement?”

Almost in unison, they replied, “Those represent the twelve tribes of Israel.”

“Wow, you are a sharp group. Twelve oxen represent the government, or priesthood, of Jehovah. That is why there are 12 tribes and 12 apostles. So, why do we put it in the basement?”

One laurel-aged youth speculated tentatively, “Because it is the starting ordinance?”

I nodded, smiled, and asked, “what are you representing when you are immersed in the water?”

Another commented confidently, “It is our burial, and then resurrection, like Christ.”

I looked around and saw that they were all nodding. Then I asked, “So where are people normally buried?”

Puzzled, but anxious to see the connection, one said, “A tomb?”

“this ordinance was instituted to form a relationship with the ordinance of baptism for the dead, being in likeness of the dead. Consequently, the baptismal font was instituted as a similitude of the grave, and was commanded to be in a place underneath where the living are wont to assemble, to show forth the living and the dead, and that all things may have their likeness, and that they may accord one with another…”

“So, it is in the basement as a symbol of the tomb for both reasons: the burial of the natural man, and the fact that we are giving the ordinance to ancestors who didn’t or couldn’t include it in their past life.  Does this mean that when you take their name into the water you are entering their tomb?”

Silence prevailed as they each became very pensive.  Then I remarked, “But we don’t leave someone under the water when we baptize them.  As one of you mentioned, resurrection is also symbolized; however, there is another symbol here.”

“inasmuch as ye were born into the world by water, and blood, and the spirit, …even so ye must be born again into the kingdom of heaven, of water, and of the Spirit, and be cleansed by blood, even the blood of mine Only Begotten.” Moses 6:59

“So, if baptism is a symbol of rebirth, then it must represent the womb as well as the tomb.”  They were standing entranced by the idea.  I asked, “Have you ever stood between two mirrors and looked into the eternity of reflections?”

They each nodded in recognition; so, I asked, “What would happen if you changed the mirror behind you?”

One volunteered, “It would change everything…everything in the future mirrors.”

So, I suggested, “The womb is your past, and the tomb is your future – two mirrors.  Do you realize that while you stood in the font with the name of an ancestor, you stood in the united symbol of their tomb and womb; thus, bringing their past and future into the present.  It is only in the present that we can change anything. Because of the Atonement of Jesus Christ, Jehovah, and through a divine priesthood mortal ordinance, you inserted baptism into their past, thereby changing their entire future.  Thank you, young people!”

I left them standing reverently gazing into the water of this time travel miracle of Divine Mercy offered during our “preparatory state”, so grateful for the temple!![2]

[2] See also https://latterdaysaintmag.com/the-surprising-insight-that-quantum-physics-can-add-to-our-understanding-of-repentance/ On details of how this time-machine works for repentance as well.

The # 12 represents Priesthood authority ( Apostles-Twelve Tribes Etc. ). But I believe you missed the important fact that The Ox represents the “House of Ephraim” and they face out towards the 4 corners of the earth. The tribe of Ephraim has the primary responsibility of “going out “ to gather the tribes into the “Brazen Sea “. Where they are gathered from both sides of the veil and brought to the Temple where the door ( Baptism) is made available to all. At least that’s the msg I get from the symbolism in the Temple Baptistery .

As an adult convert, I've never done baptisms for the dead. Many new ideas and understandings were presented clearly for me. Thank you for this article! (I'd love to have a day in the temple with the author for further insights and instructions)