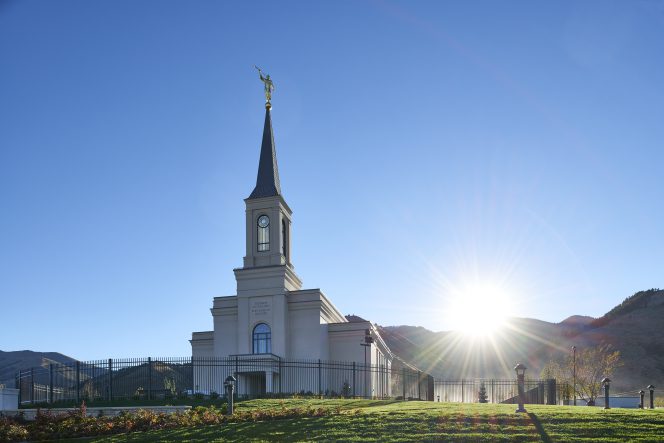 Temple Angels: You Helped Me, I’ll Help You

Editor’s Note: The following is a follow-up article to a previous article on “Temple Angels”. To read the previous post, click here.

From the beginning of time, man has had dealings with angels. They “got the ball rolling” on this planet, and they continue to keep it rolling in our day as well. Because of the holy nature of temple work, many people experience angelic communion in conjunction with temple service. For valiant men and women of faith, angels are a sacred reality.

Angels can be allowed to help us solve a problem, furnish us with additional knowledge, or they may simply be allowed to give us comfort. Last week I wrote an article called “A Two-way Street: How “Temple Angels” Can Help Us” . I would like to enlarge upon and add to that article.

Elder Jeffrey Holland declared: “From the beginning down through the dispensations, God has used angels as His emissaries in conveying love and concern for His children… Usually such beings are not seen. Sometimes they are. But seen or unseen they are always near. Sometimes their assignments are very grand and have significance for the whole world. Sometimes the messages are more private. Occasionally the angelic purpose is to warn. But most often it is to comfort, to provide some form of merciful attention, guidance in difficult times.” (Jeffry R. Holland, The Ministry of Angels” Oct. Conference 2008).

Angels are here to help the work of both the Father and the Son. As we help them with this work in Holy temples, God often allows them to help us. (We may or may not be aware of this blessing).

You Helped Me and I’ll Help You

Shirley Ricks had a sweet experience in the Monticello Temple in 2015 where she felt communication from a “temple angel”:

“We arrived a bit early, so I had several minutes in the ordinance room to contemplate and pray. I prayed particularly for my sweet daughter and her family. During the session, I had the thought come to me, “Since you are doing something for me that I can’t do for myself, I will be happy to do something for you.”

Shirley asked if Ethel, (whose work she was doing), could help bring peace to her wonderful daughter. At that moment, she felt inspired to look at the name on the card and realized that this women’s middle name was Irene (which means peace). She was assured that her daughter would be blessed!

Shirley continues: “The tears of joy and gratitude began to flow. Thank you, Ethel Irene Michael, for the privilege of going to the temple for you today!”

Angels Are Powered By the Godhead

There is an illuminating scripture that states: “Angels speak by the power of the Holy Ghost; wherefore, they speak the words of Christ.” (2 Ne. 32:3) According to this scripture, angels assist Christ and the Holy Ghost by harnessing their power to speak. Angels are powered by the Godhead in their speaking and their doing, and are an additional privilege and blessing to be received by the faithful in this Telestial sphere.

It’s important to realize that we don’t “pray” to angels, but when we try to communicate with them, we must also be in an attitude of prayer to the Father.

If a prayer is answered- who answers it? The Father? Christ? The Holy Ghost? Often the nitty-gritty job of answering prayers falls to angels? But whoever does it, it comes from the SAME GODLY SOURCE.

Angels are not independent from God, they are a part of His network.

Moroni speaks about angels saying, “For behold, they are subject unto him, to minister according to the word of his command, showing themselves unto them of strong faith and a firm mind in every form of godliness.” (Moroni 7:30)

People who attend the temple are blessed in a variety of ways, and often become keenly aware that “temple angels” are helping them.

Shellie Payne of El Paso, Texas was getting ready to leave for the temple when her teenage son could not find his math assignment. “He and I searched frantically over and over the same pile of papers and could not find it. I asked Brandon if I should stay home and look for it. His comment was, ‘No mom, don’t worry about it. When you get home it will be here.’”

“I arranged where I would meet Brandon to give him the lost math assignment and I left for the temple and he left for school. When I arrived home about noon I went straight to that exact stack of papers. Just as Brandon had predicted, the math assignment was there, – where it wasn’t before!”

On the Church website it states: “The Lord blesses those who attend to the sacred ordinance work in the temple. And the blessings He gives will not be limited to the time spent in the temple. Those who do temple work will be blessed in all aspects of their lives.” (Lds.org/topics/temples)

Angels Can Show Us What We Don’t Know

When Ed and Lesley Jordan were President and Matron of the Billings Montana Temple, they received an account from their daughter Emilee who had a dream concerning her Grandfather:

“Saturday night I had a dream.  In my dream I walked into my house and smelled cigarette smoke.  I asked what the smell was and just then Grandpa Thaxton came walking up the stairs with a cigarette in his hand.  I asked him to not smoke in the house and he immediately threw the cigarette outside.  The rest of the dream he followed me around the house and it occurred to me that he did not want to be left alone.  I really felt that he was lonely and wanted to be with me.  As soon as I realized this he gave me a hug.  I could actually feel his whiskers on my face and woke up still feeling his whiskers.  I laid there amazed because I have never had a dream feel so real to me.  Immediately I wondered if Mom and Dad had done his temple work, specifically sealing him to Grandma.  I checked on family search and it said that all of his work was done but that his sealing was reserved, but not done.”

“I called Mom and Dad that afternoon and asked if they had sealed him to Grandma.  Mom said that they had.  I told her about my dream and how I thought it meant that the work wasn’t done.  I also told her that it wasn’t recorded on Family Search.  She looked it up and it hadn’t been done.  She thought they had done it!  I know that they would have eventually found that it wasn’t done but my impression was that Grandpa was lonely and he didn’t want to have to wait any longer.”

“Mom was a little disturbed about the fact that he was smoking in my dream.  I have come to the conclusion that in my dream he threw the cigarette outside, he didn’t go outside to smoke.  He threw it out so that he could be with me.  In other words, he’s given up his sins and weaknesses and accepted the gospel so that he can have an eternal family.”

“Maybe this sounds like I am stretching for something impossible here but I cannot deny how real all of this has felt and how the Holy Ghost has confirmed every feeling I had to be true.  It is comforting and amazing to know that our Grandpa has accepted the gospel and we WILL see him again and live as an eternal family.  I have never felt such a powerful confirmation in my life.  Isn’t it wonderful?  My testimony has grown so much stronger because of this experience!”

Because of Emilee’s powerful dream, where her Grandfather revealed what was not known, and a great reason to rejoice that this “temple angel” was allowed to inform them of what they needed to do to help them expand their eternal family.

They are Solicitous for our Welfare

“President Joseph F. Smith: “I believe we move and have our being in the presence of heavenly messengers and of heavenly beings. We are not separate from them. … We are closely related to our kindred, to our ancestors… who have preceded us into the spirit world. We cannot forget them; we do not cease to love them; we always hold them in our hearts, in memory, and thus we are associated and united to them by ties that we cannot break… If this is the case with us in our finite condition, surrounded by our mortal weaknesses… how much more certain it is to believe that those who have been faithful, who have gone beyond… can see us better than we can see them; that they know us better than we know them… We live in their presence, they see us; they are solicitous for our welfare, and they love us now more than ever. For now they see the dangers that beset us. Their love for us and their desire for our well being must be greater than that which we feel for ourselves.” (Joseph F. Smith, in Conference Report, Apr. 1916, 2–3;)

Many who attend the temple find that they have an increase in spiritual experience and can feel the help and influence of angels. These beautiful beings can be allowed to help us solve a problem, furnish us with additional knowledge, or they may simply be allowed to give us comfort. Angels are an important part of this crucial time in the earth’s history, and we’re the one’s who are lucky enough to be the recipients. Are we taking advantage of this privilege?

Thank you for this beautiful article and for the previous one. I know for sure that this is true out of personal experience but it's always special when other testimonies are added upon. I love the temple.

Thank you, the veil is very thin, always.

When Questions Seem to Exceed Answers