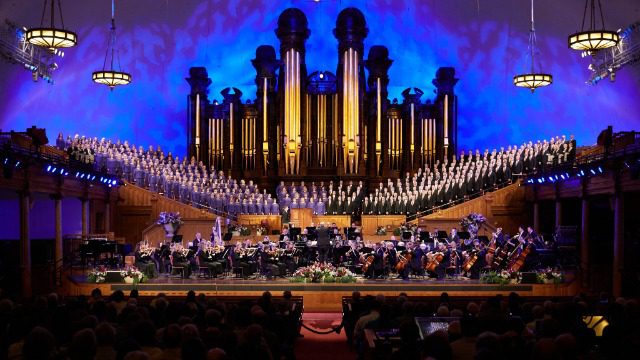 Michael O. Leavitt, president of The Tabernacle Choir at Temple Square, addressed a virtual audience of members of the Choir organization Thursday night as he announced four new high-level objectives that will set a bold and historic direction for the famed Choir and Orchestra.

Leavitt and his counselors, L. Whitney Clayton and Gary B. Porter, have been in place for six months. During that time, they have followed counsel given when they were called by Church President Russell M. Nelson that they should prayerfully look for innovative and transformative ways for the Choir to meet the mission of the Church in the future.

Leavitt said when they returned recently to the First Presidency to ask for approval of their key objectives and plans, “President Nelson and his counselors expressed their enthusiastic approval of what we will discuss with you tonight.”

The first of the four new key objectives for the organization is to expand the Choir’s digital audience. Currently, the Choir organization reports its social media activity in hundreds of thousands of subscribers. The Choir now aspires to measure this reach in the tens of millions by seeking new and more diverse audiences worldwide and moving from CDs and DVDs to streaming on social media and evolving with technology. A group of experts is being assembled within and outside of Church headquarters to address how this can be accomplished.

The second key objective is to magnify the Choir’s missionary role. President Clayton said, “It is often easier to start a gospel conversation by making a gift of sacred music to a friend or stranger than it is to ask direct questions about their faith. We also believe there are ways the Choir and Orchestra can give a boost to the missions of the Church as they perform around the world.”

The third key objective for the Choir is to reflect the Church’s worldwide mission.