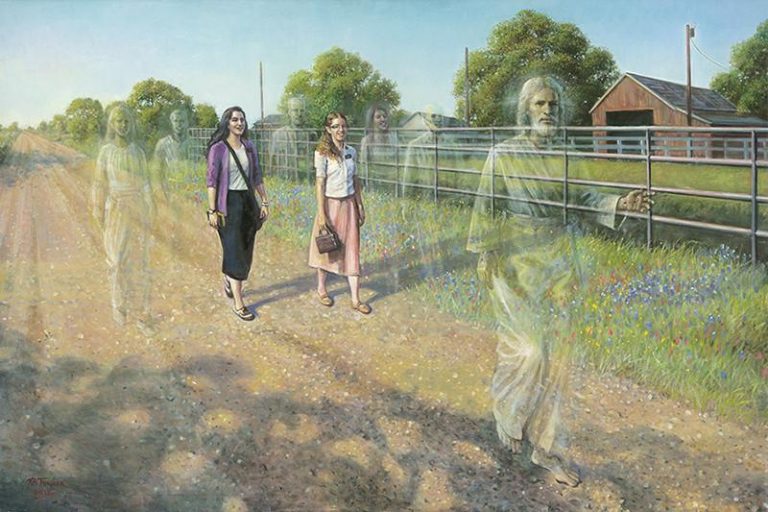 Cover image: “I Will Go Before Your Face” by Kenneth Turner.

There are remarkable things going on in all of our lives that we generally cannot physically see because of the restriction of the veil. Angelic interventions and miracles are ongoing, but never more so than in the lives of missionaries as they gather scattered Israel.  Sometimes the spiritual curtain is lifted, and angels are perceived.  These are stories worth being told…

Allison Kendrick shared with me the singular experience of seeing angels around a missionary at his missionary farewell.   She writes,

“When a missionary who had been my student in a church class was giving his farewell speech, I saw tall shining figures glowing and in white all around him. I couldn’t see their faces clearly, but I somehow knew that they were all his family members who had passed beyond the veil, and they seemed very proud of him. I later wrote and told him of my experience.”[1]

“I had the opportunity to see angels surrounding our missionaries when my husband was invited to play his Native American flute at a zone meeting in Santa Fe.  The Elder conducting the meeting advised the missionaries to quietly meditate during the hymn.  As I was meditating something brushed my shoulder and I opened my eyes to see the room crowded from floor to ceiling with the missionaries’ guardian angels.  I wrote to our missionaries’ parents to tell them my experience, so they knew how protected their beloved sons and daughters were.”[2]

Faithful missionaries are surrounded by angels, and at times people are blessed to see them.  The following story also shares this wonder.

Brilliance Emanating from their Faces

Sister Patrocinio wrote of an unforgettable experience she had while on her mission with an investigator in Sinop, Mato Grosso.  She writes,

“This week was very interesting.  We were teaching an elegant and highly educated woman named Zilamar. We went and gave her the introductory lesson and explained about the happiness we feel for being members of the Church…

“A few days later we returned on a follow-up visit.  We stayed there for over an hour conversing with her about her family, her husband and her trials…Then she said:  ‘The first time you visited me I saw something different in you.  I don’t know whether you believe in angels, but I saw two angels on each side of you, but I was unable to see the faces of those beings because they had a brilliance emanating from their faces that was so strong.  I know that you are protected by angels, because I saw those beings.’”[3]

Angels Have Charge Over Missionaries

In one of our most cherished scriptures, the Lord tells us,

“I have given my heavenly hosts and mine angels charge concerning you….And whoso receiveth you, there I will be also, for I will go before your face.  I will be on your right hand and on your left, and my Spirit shall be in your hearts, and mine angels round about you, to bear you up.”[4]

Zilamar, in the previous story, joyfully witnessed this phenomenon.  The fact is, missionaries are often surrounded, protected and sustained by angels as they do the Lords work in both big and little ways.

Angels at the Airport

Elder Matt Hill was leaving for his mission in Nicaragua. His luggage was 93 pounds and he was told by the airline that he had to take out 23 pounds of weight in order to get on the plane.  He opened up the luggage and looked inside.  There was absolutely nothing that he felt he could be without on his mission.  He fervently prayed about what he should leave behind.  It was at this time, he “heard” the peaceful words in his mind,

“Relax, put the suitcase back through.”

Elder Hill exerted his faith and put his luggage through again without taking anything out as he had been spiritually instructed to do.  This time it went through with no problem, even though he didn’t know how.  He absolutely knew he had angels helping him.[5]

Before Christ’s FIRST COMING, there was a lot of angelic activity in the land. Alma tells us,

“Yea, the voice of the Lord, by the mouth of angels, doth declare it unto all nations; yea doth declare it, that they may have glad tidings among all his people…For behold, angels are declaring it unto many at this time in our land; and this is for the purpose of preparing the hearts of the children of men to receive his word at the time of his coming in his glory.”[6]

These same words are applicable for the SECOND COMING of Christ.  Angels are declaring truth to the hearts of those ready to receive the gospel now.

The truth is that angels are our companions as we endeavor to participate in gathering Israel.

When David Babbel was Mission President of the Brazil Brazalia Mission, 2002-2005, he and his missionaries had extraordinary experiences.  I would like to share two of them below with his permission.

Veil Opened for Missionaries to See a Presence

Elder Manfre was aware that he had angelic help as he led a discussion with a family one evening.  The parents of this family had a young son who had recently died from a terrible accident and were very open to the truths of the gospel.  He writes:

“We began to teach them and the Spirit with us was very strong.  At times I was incredulous at the words that were coming from our mouths as we spoke by the Spirit.  Then my companion [Elder Homer] began to speak about eternal families.  The intensity of the Spirit became stronger and stronger, and I began to feel something different,—a feeling of great peace.  Next, I saw and felt the presence of a small child.  In that room I perceived a very strong light and I could discern the appearance of this small child.

“My words became stronger with respect to how this man could reunite with his child after this life.  With tears in his eyes, this man told us that the hope that one day he could see his child again gave him the desire and strength of will to cope with the death of that child.  I don’t know how to describe with words the feelings that I had, but I know that for a moment the veil was opened and I saw and felt that light— a child that was not with us in physical matter – but in spirit.

“Shortly thereafter the father of this child handed to me an album with some photos of his child.  I almost cried, because I was very certain then that it was the same child that I had just finished seeing and feeling.”[7]

That child angel was allowed to prepare the hearts of his parents as well as to bless the life of the missionaries.

“While on his mission in Brazil, Elder Melendez was serving as a Branch President over the Posse Goiás Branch.  He desperately needed guidance from the Lord in his calling.  He wrote:

“One Sunday night I arrived home from church and what made this Sunday different from all the others was the conversation I had with a member.  This person had not come to church for a long time because of things that had happened to her.

“After our conversation I came home and knelt in my room to pray.  I asked the Lord if He could please guide me as to what I should do and where I could find the information I needed.  I had the church manuals and looked through them constantly but could not find the answer I was seeking.  At the end of the day when we returned to our house I looked again and still could not find it, so I prayed and went to bed.

“That night I will never forget.  As I slept, it felt as though someone came to me and they said that they were sent to get me.  This person was dressed in pure white, so I followed him.  He took me to a room that was pure white and then the room became brighter and brighter, I looked at the person who had brought me but I could not see his face;  I just saw him point toward the source of light as if beckoning me to go ahead and ask.  So, I explained what was going on and that I was looking for some guidance as to what I should do.  The light didn’t say anything.  All it did was extend its hand and point to the church manuals.  I explained that I had looked and couldn’t find what I was seeking.  The hand then grabbed a piece of paper that had a number written on it.  I took the number, and the person who brought me there took me by the hand and brought me back.

“As soon as I woke up I ran to my desk to find both books laid on my table.  (The night before I had placed the books in my room on my bag).  I remembered the number and opened the book immediately.  As I read the page it was exactly what I was seeking.”[8]

Marvelous! All of these stories show how missionaries are surrounded, protected, and enlightened by angels.

Angelic interventions and miracles are ongoing as missionaries are aided in preparing hearts for the Gospel.  Heavenly hosts surround and “bear them up” in both big and little ways helping them to gather scattered Israel.

If you have had experiences with Angels and want to share, I’d love to hear your experiences.  CONTACT me at [email protected]

[3] Personal Correspondence with David Frederick Babbel, and quote from his book, Mine Angels Round About You, p. 4-5, Used with permission.

[7] David Frederick Babbel, Mine Angels Round About You, p. 122 Used with permission.

I suspect that missionaries are not the only ones warded by angels, although I must agree that they are probably the ones most apt to be consistently guarded and probably the most apt to discern their presence, also. I cannot say that I've ever seen an angel, but I have seen evidences that they exist. Perhaps that is "good enough" for me.

I know this is true. We have been promised that we could have angels to help us. I remember reading a book by Elder F.Enzio Busche that talked about how angels helped the saints so much in Germany in WWII. It was so inspiring. Though I don’t remember it, I had an experience with them as a child. This made me realize how close those who have passed on are to us and want to help us. Heavenly Father is aware of each of us. Thank you for sharing.