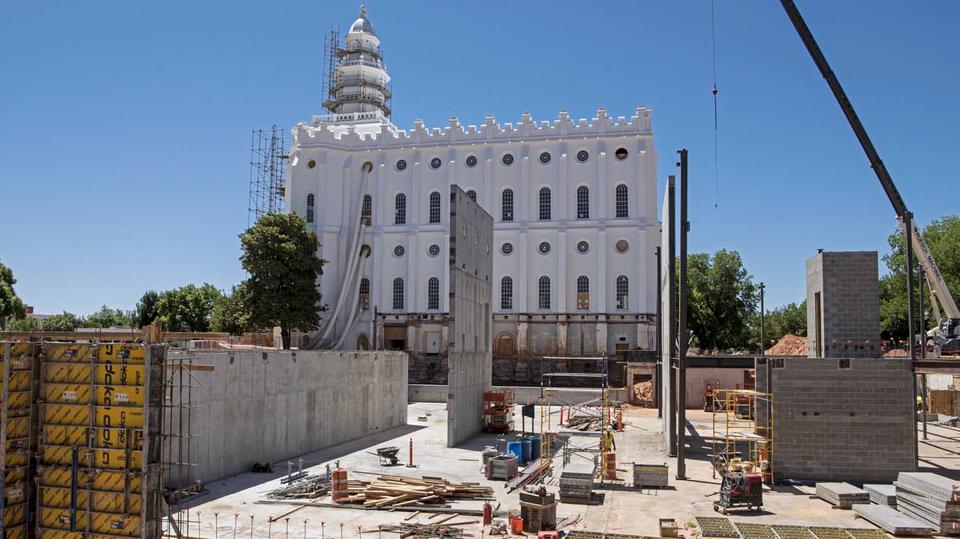 Sounds of machinery and construction crews plying their trade echo across the property of a beloved landmark. Its familiar white walls that glisten in the autumn sky can be seen from most parts of this Southern Utah town steeped in pioneer history.

The St. George temple reached a milestone at the beginning of November. It marks the one-year anniversary of extensive renovations that visibly transformed the project from the first order of business to remove the temple’s north entrance and west wing, which were added in the 1970s.

Over the past six months, construction teams have been busy adding a concrete foundation and structural steel girders and beams to the three-level north entrance, which will house administrative offices, men and women’s changing rooms, and a chapel.

The most noticeable transformation is the installation of the precast walls that reflect the same pillared design cues and trademark circular windows as the temple itself. Installation crews are also adding metal stud partition walls to the interior of the north entrance addition.

The new exterior construction replicates the 1870s architecture of the pioneer temple. The decades-old utility system and heating, ventilation, and air conditioning system have been brought into the 21st century with upgrades to more efficient state-of-the-art systems.