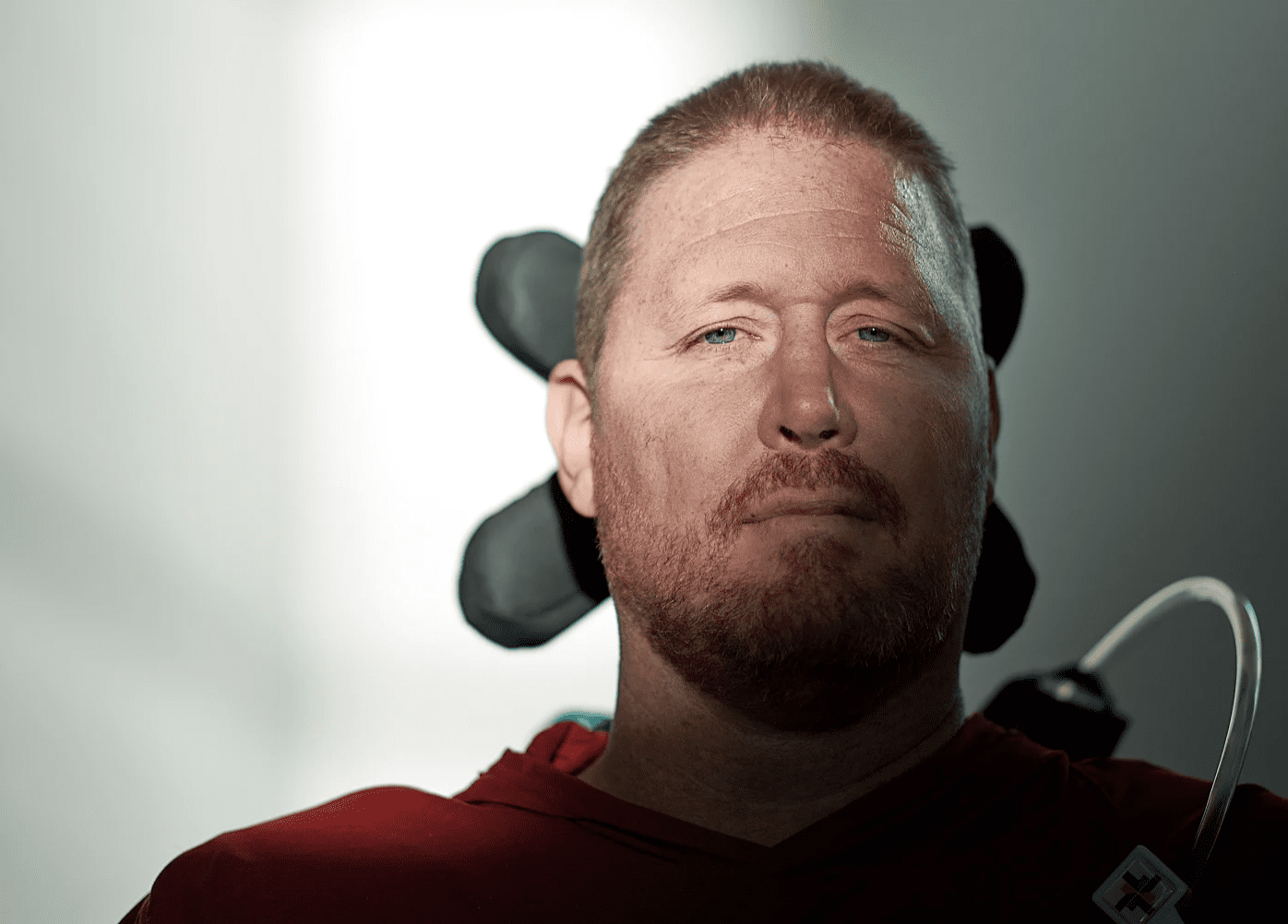 Sports Illustrated: Shawn Bradley on Life After the Accident

The following is excerpted from a lengthy feature recently published by Sports Illustrated about Shawn Bradley, the Latter-day Saint and former NBA player who became paralyzed in a bike accident early in 2021. To read the full feature, CLICK HERE.

Home since November, Bradley’s days now begin, typically, in the middle of the night. Every three hours an alarm rouses him, and he shifts his legs using straps tied around his knees, rolling from one side to the other to prevent bedsores. Around 9 a.m. a caregiver readies him for the day, cleaning up any messes he may have made overnight, ensuring that he has a bowel movement, dressing him in a disposable brief and basketball shorts by rocking him back and forth a dozen times to shimmy the garments up. Then, using a contraption that resembles a small crane, with a fabric sling on the end, the aide moves Bradley from his bed into his wheelchair, another 15-minute ordeal. They will repeat these same steps, in reverse, 12 hours later.

Bradley uses an $8,000 custom-made shower chair that fits in his downstairs bathroom, but the process is so onerous for Carrie that she bathes him only twice per week. Occasionally she has had to help with bowel-movement cleanup when her husband has an accident and an aide can’t reach him. In such a young marriage, these are boundaries that Bradley wishes Carrie never had to cross, but the line between spouse and caretaker has already blurred irrevocably. They visit a therapist together, and separately, trying to navigate scenarios that neither of them could have fathomed when they exchanged vows. “I didn’t ask her to do this,” Bradley says. “This isn’t what ‘in sickness and in health’ typically means.”

To cope with old traumas and fresh ones, Carrie remains in perpetual motion—tending to her husband, scheduling appointments, keeping pace with her kids. When Shawn was in the hospital she would often bring in pastries to lift up the staff, then return home and collapse in her upstairs closet, hoping the clothes muffled her sobs. “It’s not just the person that’s involved in the accident,” Carrie says. “It’s a domino effect. Our family has been forever changed.”

The Bradleys, still, probe constantly for normalcy. After Shawn left the hospital in May they tried a date night, but it required that Carrie scout a movie theater to determine whether the venue could accommodate Bradley’s mammoth wheelchair—a rig that weighs nearly 500 pounds, took three months to engineer and, he says, “costs more than most cars.” Carrie had to tend to Shawn’s popcorn and soda throughout the film, then load him into the family’s new $120,000 cargo van, which lists violently to one side as its hydraulic lift raises him up. Even date night exhausted her. “I love him, and he was so happy,” she says, “so I never wanted to tell him.”

Bradley is awed by his wife and all that she has done, not just to keep him alive but to make life worth living. For years, his presence buoyed their family. Now, unquestionably, he is their preeminent concern—and “I don’t know how I can ease the burden of me,” he says. When that conundrum weighs most heavily upon him, he can’t avoid considering one way to solve it. “Maybe it’d be better if this was just all over,” he says. “Yes, those thoughts creep in—and they’re real. I can’t ever imagine myself acting on those thoughts, but I definitely have them.”

The Bradleys built their dream home in St. George a little over two years ago, and while it was designed for a 7’6″ former NBA center—expansive door frames, super-tall vanities, chest-high doorknobs—it was not designed for a 7’6″ former NBA center in an electric wheelchair. Shawn can’t access the gym or the home theater in the basement. To avoid crushing the tracks that keep wall-sized sliding doors in place, he must take the long way around the side of the house to reach his backyard, with the pool in which he can’t swim. Because he needs room to shift positions at night, Carrie sleeps upstairs in the master bedroom while he’s relegated to a first-floor guest room. He’s confined to just a fraction of a sprawling three-story home.