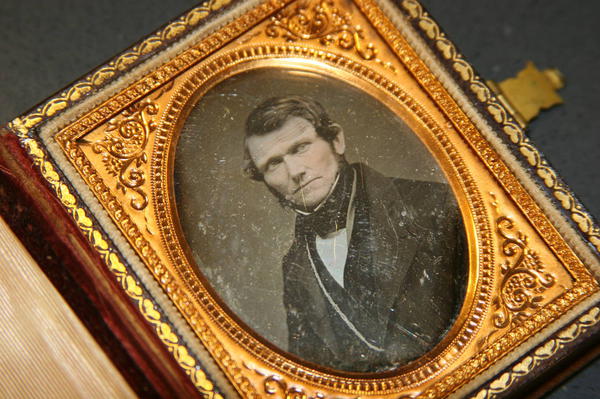 It’s one of the most significant discoveries in Church photographic history. A small, wonderfully preserved daguerreotype (dag) of Wilford Woodruff taken during the Nauvoo-era at about the age of 37 was found and purchased recently on eBay by Utah photo historian Ron Fox and Anthony Christensen of Anthony’s Antiques and Fine Art.

“When I discovered the image and knew who it was, I began to shake,” said Brother Fox. “I called my wife in to look at the image. I realized I had found something very special and very valuable.” The incredible find was not simply by chance and represents a tremendous amount of work. Brother Fox looked at 70 to 100 dags a day on eBay for about two years, many without any names or identifiers. That’s more than 70,000 images over the past two years.

Taken just two months after the death of Joseph Smith, the dag of Wilford Woodruff shows a strong, vibrant man with the presence and dignity of one who will later become president of the Church. The eBay listing had no name but the description stated, “handsome intelligent looking man.” It was purchased as part of a collection of images from a female antique dealer in western Massachusetts, only 40 miles from the original home of the future prophet.

“I feel a special connection to Wilford Woodruff,” said Brother Fox. “I was blessed to find the first photo of his family, the last known photograph of him at the dedication of Pioneer Park on July 24, 1898 (Deseret News cover, July 24, 2013) and with this new discovery, the first known documented Nauvoo image of any person. I often feel that I have been led to some of these historical items by inspiration.”