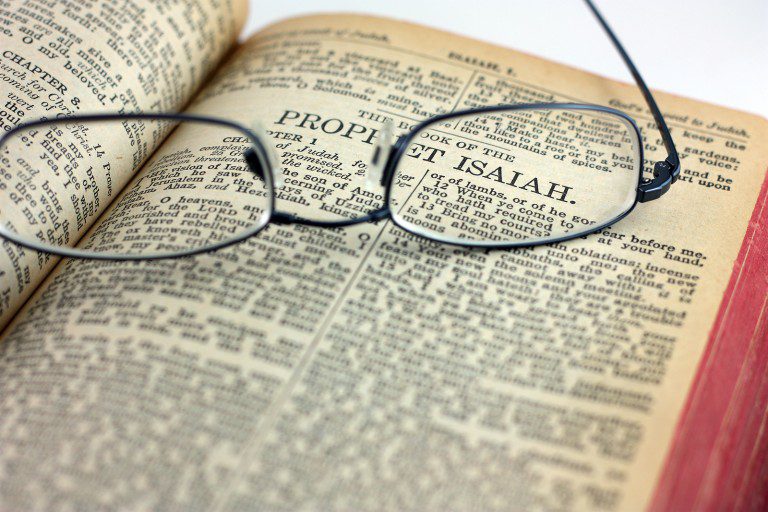 Scriptural Evidence that the Prophet Joseph Smith was Called of God

Many prophets foreknew and foretold of Joseph Smith’s life and mission. Ancient prophets have been anticipating for hundred and even thousands of years the marvelous work that Joseph Smith would perform. Here are more of the scriptural prophecies fulfilled by the Prophet Joseph (not listed in chronological order).

Jacob 5:70-71. The Old Testament prophet Zenos saw that in the latter-days, the Lord would call a servant to labor with a few others to prepare the Lord’s vineyard for His return (His Second Coming). Joseph Smith is that servant, and the Lord’s promise to him was: “For behold, this is the last time that I shall noursih my vineyard; for the end is nigh at hand, and the season speedily cometh; and if ye labor with your might with me ye shall have joy in the fruit which I shall lay up unto myself against the time which will soon come.”

Isaiah 11:10. Similarly, Isaiah prophesied that the Gospel would be restored as “an ensign” for all people to gather to, and the Lord promised the prophet who would be called to initiate the Restoration, that “his rest shall be glorious.”

Matthew 24:14. The Savior gave a sign of His impending Second Coming, that the gospel would be preached in all the world for a witness to all nations, and then shall the end come. The Prophet Joseph Smith made an interesting comment about this verse just a few weeks before he was martyred at Carthage. “Samuel W. Richards, a close associate of Joseph in Nauvoo, wrote that on 12 May 1844 the Prophet Joseph taught from an old German Bible text that the ‘kingdom’ must be ‘preached to a man who should be a witness to all people’ (see The Words of Joseph Smith, 1980, 371). That same day, George Laub, another close associate, also recorded the Prophet as saying that the Lord would ‘send … another witness and he shall preach this gospel to all nations’ (Ibid., 369–70.) Both Laub’s and Richards’s accounts seem to indicate that Joseph taught he was this witness ‘chosen for the last dispensation or Seventh Dispensation’” (Ibid., 370).

JST John 1:6, 20-22, 25. When John the Baptist began his ministry and was baptizing people in the Jordan River, the Jewish religious leaders sent priests and Levites to ask him “Who art thou?” He confessed and said to them, “I am not the Christ,” but I am “Elias” (meaning a forerunner). The Joseph Smith Translation adds clarity to what John said next. They asked him, if you are not the Christ, then “how art thou Elias?” He answered that he was an Elias sent to prepare the way, but “I am not that Elias who was to restore all things. And they asked him, saying Art thou that prophet? And he answered, No.” So if John was an Elias (a forerunner), but he was not the Christ, then who is this other Elias who would one day come and restore all things? The Prophet Joseph testified that he himself was “that prophet” (see Ehat and Cook, The Words of Joseph Smith, BYU Religious Studies Center, 1980, 370). On 12 May 1844, just weeks before his martyrdom, the Prophet Joseph gave a sermon in Nauvoo and affirmed he was the very Elias who was called of God to begin the Restoration. George Laub, who heard him give this sermon, wrote: “Brother Joseph Smith was chosen for the last dispensation or seventh dispensation. [At] the time the grand council [sat] in heaven to organize this world, Joseph was chosen [as] the last and greatest prophet, to lay the foundation of God’s work of the seventh dispensation. Therefore the Jews asked John the Baptist if he was Elias, or Jesus, or that great prophet that was to come” (Wordsof Joseph Smith, 370). The Jews asked John the Baptist if he was that great prophet of the Restoration or Jesus himself, and he answered no to both questions. Even John the Baptist knew of the future great mission of the Prophet Joseph Smith.

JST Matthew 17:10-14. While on the Mount of Transfiguration, Peter, James and John saw the Savior transfigured, heard the voice of God, and saw John the Baptist (who had been beheaded earlier) appear as a spirit from the post-earthly spirit world. As they were coming down from the mount, they asked the Savior about a forerunner (an Elias) who was to come and “restore all things.” The Joseph Smith Translation clarifies that John the Baptist was an Elias (a forerunner) who had already come to prepare the way for the Savior’s ministry. And it hints that John the Baptist would also be the forerunner to prepare the way for the Second Coming. (John the Baptist was the first prophet to lay hands on Joseph Smith’s head and restore priesthood keys for the Aaronic Priesthood, paving the way for the restoration and organization of the Restored Church.) But in the Joseph Smith Translation of Matthew 17, the Savior also teaches that another Elias would come “and restore all things, as it is written by the prophets.” Thus, Joseph Smith is also an Elias. It was he who was called to “restore all things” from all previous dispensations, to pave the way for the Second Coming of Jesus Christ.

Revelation 14:6-7; D&C 27:5; D&C 133:36-39. John the Revelator saw that angels would help restore “the everlasting gospel” to the earth in the last days. The angel Moroni brought the Book of Mormon; John the Baptist and Peter, James and John restored the Aaronic and Melchizedek priesthoods; Moses, Elias and Elijah restored priesthood keys, power and authority to Joseph Smith in the Kirtland Temple. We believe in the ministering of angels and our testimony to the world is that angels have returned to this earth where they once lived, to restore the keys and knowledge they held–for the establishment of the Restored Church of Jesus Christ and to prepare the earth for the Second Coming of Jesus Christ.

The fulfillment of all these prophecies (and those in the two previous articles in this series about prophecies fulfilled by Joseph Smith), and more, are an absolute evidence that the Prophet Joseph Smith was called of God. No other mortal has ever come close to fulfilling these prophecies, let alone claiming to do so. And the only way Joseph Smith could do it was because he was divinely guided. The ancients prophesied that a book of truth would come out of the earth, that angels would restore priesthood authority, and that the Savior and the Father would appear together to begin the restoration of all things that God had spoken by the mouths of his holy prophets since the world began. Where in world history can you find anyone who has fulfilled these prophecies, other than the Prophet Joseph Smith? No other religious leader in history, none of the Reformers, and no religious leader today has the temerity to make such claims. Yet the prophecies have all been fulfilled.

If Joseph was simply making all of this up from his own imaginations, he would have had to read the Bible completely through, identify all the prophecies of the Restoration, and then create ways to fulfill them. Impossible to do. But because he followed the promptings of the Spirit and the revelations he received from God, Joseph was enabled to fulfill them all. That’s one reason why President Gordon B. Hinckley said: “We sing, ‘We thank thee, O God, for a prophet to guide us in these latter days’. I don’t think of myself when we sing that hymn.  I think of the Prophet Joseph Smith, THE great Prophet of this dispensation, THE  instrument in the hands of the Almighty in bringing to pass this marvelous work” (LDS Church News, Feb. 4, 2006, 2).

Little wonder that President John Taylor, who was with the Prophet Joseph in Carthage Jail when Joseph and Hyrum Smith were murdered, and whom himself was viciously wounded in Carthage, bore this testimony: “Joseph Smith, the Prophet and Seer of the Lord, has done more, save Jesus only, for the salvation of men in this world, than any other man that ever lived in it. In the short space of twenty years, he has brought forth the Book of Mormon, which he translated by the gift and power of God, and has been the means of publishing it on two continents; has sent the fulness of the everlasting gospel, which it contained, to the four quarters of the earth; has brought forth the revelations and commandments which compose this book of Doctrine and Covenants, and many other wise documents and instructions for the benefit of the children of men; gathered many thousands of the Latter-day Saints, founded a great city, and left a fame and name that cannot be slain. He lived great, and he died great in the eyes of God and his people; and like most of the Lord’s anointed in ancient times, has sealed his mission and his works with his own blood” (D&C 135:3).

And in that same spirit, in the eulogy he delivered for his friend, the Prophet Joseph Smith, Brother William W. Phelps wrote this hymn of praise and prophesy:

Praise to the man who communed with Jehovah!
Jesus anointed that Prophet and Seer.
Blessed to open the last dispensation,
Kings shall extol him, and nations revere.

I loved articles like this that show references to the great Prophet Joseph! Here is another that I particularly like; Isaiah 54:16 "Behold, I have created the smith that bloweth the coals in the fire and that bringeth for an instrument for his work..." To me, that is absolutely Jospeh translating that great instrument of gathering, the Book of Mormon!