Saved By a Hymn | Meridian Magazine 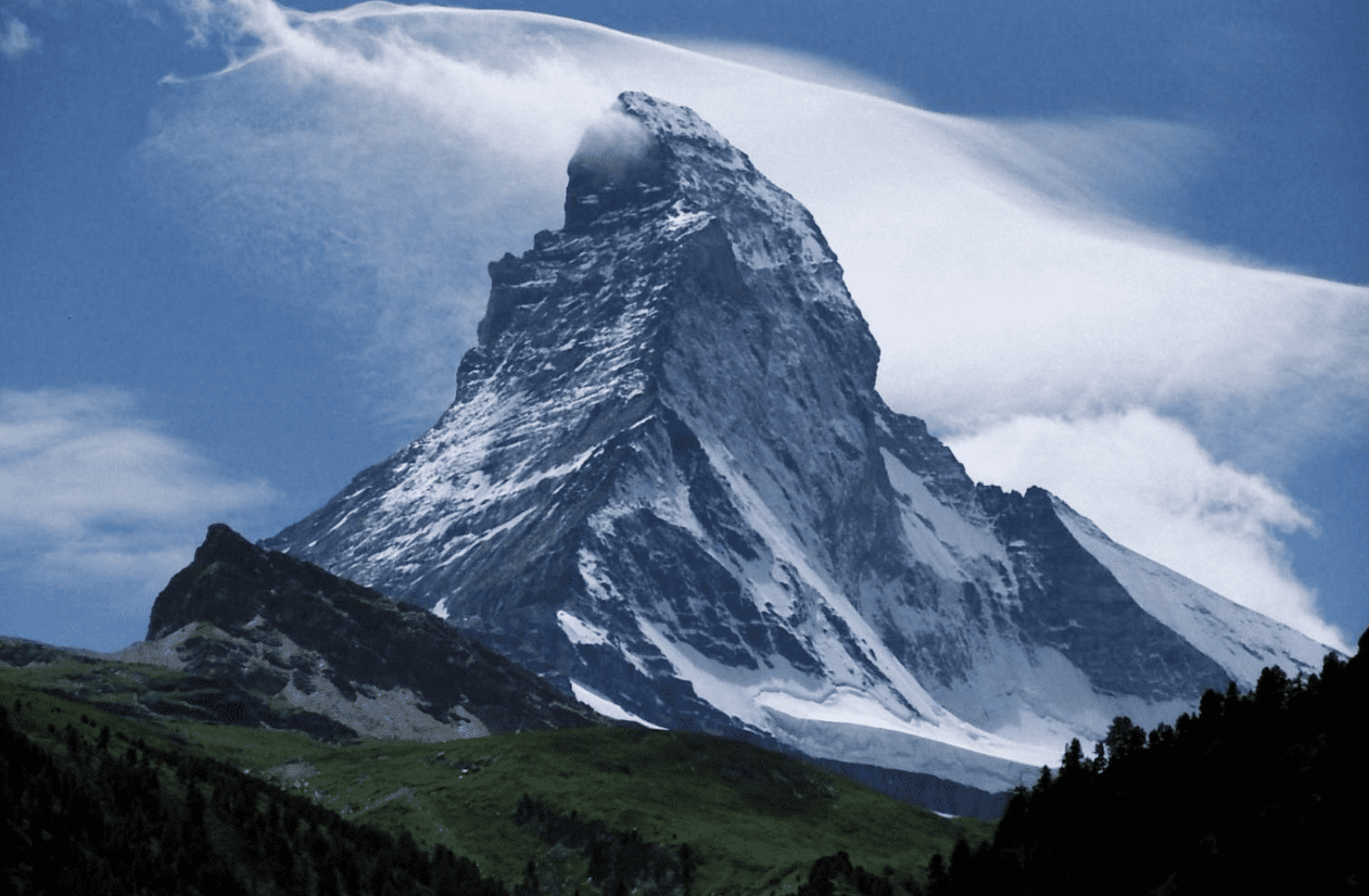 Saved By a Hymn

I’m in Utah today.  I’m looking out the front window watching a beautiful snowstorm, which has brought up an interesting memory of a snowstorm several years ago that was wild and crazy and nearly cost me my life.

My husband, John, wanted to celebrate his 60th birthday by hiking across Switzerland, starting at Mt. Eiger and ending at the Matterhorn.  We joined a group of hikers through an adventure firm.  That year I was teaching Education Week  (Late August), which went right up until two days before our 7-day hike was to begin.  After Education Week, I flew straight from Utah to meet John in Atlanta where we left immediately for Switzerland, arriving just in time for the dinner with the group the night before the hike was to begin.

Our leader, Marie-Galen, asked us to go around the circle and introduce ourselves and share our hiking background.  Turns out, John and I were the only ones in the group that had not hiked at least one of the seven top peaks of the world.  That was a little intimidating!  It also turned out that, other than our leader, I was the only woman in the group of about eight men.  That was also a little intimidating!

The next day as the hike got under way, starting at the base of Mt. Eiger, we were charmed at the beauty of the Swiss Alps.  The weather was crisp, the air crystal clean, and the scenery breathtakingly beautiful!  It was a gorgeous Autumn.

We hiked up and down spectacular mountains for several days. It was exhilarating! Marie-Galen had warned us that the weather could turn in an instant, so even though it was early Autumn and snow was not forecast, she insisted that we carry our snow gear in our backpacks every day.

One day, we took a long chairlift to the top of a mountain.  To our surprise, when we got to the top, there was about 2 feet of snow on the ground.  But the day, itself, was still beautiful.  My backpack was pretty weighed down with my ski sweater, coat, gloves, scarf and hat, so John offered to take my winter gear in his backpack in exchange for me carrying both of our lunches.  The first six hours of hiking were delightful.

But then, the wind began to pick up as a major winter storm blew in.  At first it was just a light snow.  I fell behind the group to find a spot to use the bathroom. (Remember, I was the only woman in the group).  When I finished, I could only find one of my hiking gloves.  The other was somehow lost in the snow.  But by now, the wind had increased in intensity almost instantly.  Before we knew it, we were in the midst of a blizzard.

The group was ahead of me.  I didn’t dare go on, until I could find my other glove, fearing that without it, my hand might freeze.  By now the wind was whipping snow all around.  Visibility was suddenly down to nearly zero.  I frantically thrashed in the snow with my hiking poles, but I couldn’t find the glove.  I wondered if it had fallen before I had stopped, so I started to backtrack.  I backtracked about 100 feet.

No luck!  I yelled to John to ask him to wait, but the group had already moved beyond earshot of where I was.  I shouted desperately, but the only response was the blowing wind.  I had not yet gotten my coat out of John’s backpack, and I was shivering cold.  I prayed desperately for help.  I returned back to the spot I had used for the bathroom and was so relieved, this time, to see my glove under about two inches of snow.  It had fallen about ten feet before I had stopped to use the bathroom.

By now, I could see nothing, not even the path. The wind increased and was whipping the snow, blurring all vision.  I was freezing cold.  I screamed, hoping someone would hear me.  Only the wind responded.  I tried to run, but was afraid I might run off a cliff, since visibility was so low.  With my head down, my ears freezing and my hands numb, I tried to decipher the path by finding bootprints, but they were all quickly filling with snow. Why in the world had I not gotten my coat out of John’s backpack?

I wished I had told someone I was stopping.  As it was, I realized that everyone probably thought I was hiking with another member of the group.  By now, I was completely panicked.  I tried to walk as quickly as possible, but the snow was getting deeper and deeper.  I was praying nearly non-stop, begging for direction.  I struggled for nearly half an hour.  I was terrified.

Then, I ran into a signpost, which I hadn’t seen because of the blinding snow.  By now I was so, so completely cold.  My mind seemed to be in a fog.  I tried clearing the snow off the signpost so I could read it.  It was pointing in two different directions.  The names of the towns were in Swiss German.

Before the day started, Marie-Gelen had given us a preview of the day, telling us we would hike to some point, where we would change to go toward another city. I’m sure she had told us the names of the cities, but to be truthful, the names were all in German, and didn’t really register with me.  As I now stared at the two names on the arrows pointing different directions, I tried frantically to remember what she had said.  Neither name resonated in my memory.

Realizing that the choice I made now, might be a life-and-death choice, I prayed fervently for God to direct me.  I decided I should take the downward path. (Anything to get off this mountain!)  Then before moving downward, I realized that in my mind I was singing something.  As a musician, I almost always have a tune of something in my mind. It might be Beethoven’s Pastoral Symphony, or it might be something as silly as “I wish I were an Oscar-Meyer Weiner.”

I stopped to listen to this inner voice.  As I focused on the tune in my head, I realized that my mind was singing, “Be Still, My Soul.”  Today that hymn is quite popular, but at that time, the hymn was not widely sung in the Church. I must have heard it before, because I was aware of the words, not only the tune.  I was struck by the message, Be still.  Be still???  I stopped dead in my tracks, wondering if God was answering my prayer through this hymn.  I didn’t dare leave the spot.  I felt I needed to Be Still.  But if I stayed, I feared I might literally freeze to death.

As I stood in the blizzard, frantically wanting to move forward in ANY direction, but not daring to go against what might have been a heavenly message, I suddenly saw a form moving toward me.  It was Marie-Galen!  Never have I been so grateful to see someone! She told me to follow her.  She later told me that once the group realized I was missing, she sent them on toward a resort at the top of the mountain.  She went back to find me.

When she got back to the signpost, she decided she should stop and wait there to make sure I took the right turn UP the mountain.  But the wind was so bitter cold, she said she couldn’t stand in the wind, so she took refuge under an overhang.  And she had all her winter gear on!

She would come out every few minutes to check to see if I had arrived at the signpost.  Because I had stopped to follow the message, Be Still, I was there when she emerged from under the ledge.  Otherwise, I would have been headed down the mountain.  In the freezing wind and snow, with no winter gear on, I would likely not have survived.

This truly was a miracle.  If I had headed down the mountain when I thought I should go downward, I would have missed her.  I was saved by a hymn.

This was not the first time in my life that I had been blessed by a hymn.  At different times in my life, hymns have been a comfort to me when I desperately needed comfort; they have given me direction, and they have taught me.  In the 25th section of the Doctrine and Covenants, Emma Smith was told that a hymn is as a prayer to God.  In my case, the almost unrecognized hymn I was singing almost imperceptibly in my mind, ended up saving my life.

It is interesting to me that those who knew Joseph Smith well, said he prayed at least five times a day.  Each time, before he prayed, he would kneel and sing a hymn, inviting any who were nearby to join him.  The hymns not only invited God’s Spirit, but they helped to prepare his heart to receive God’s Spirit. And Joseph was a prophet! If he, needed to sing a hymn to prepare to pray, what about me?

In my own life, I have noticed a distinct difference when I sing a hymn before praying.  It softens my heart and helps me tune out the world, making it easier to communicate with God.

Several years ago, while on a Church History Tour with Scot and Maurine Proctor, we often spent the long hours between Church history sights, singing hymns on the bus.  When we got to the Kirtland Temple, we had a lovely experience in the temple.  The director of the Temple for the Reorganized Church gave an interesting lecture on the history of the temple.  After he finished, Scot asked him if we could sing a hymn before leaving.  He seemed surprised, but graciously agreed.

We sang, “The Spirit of God.”  Immediately the feeling in the room changed.  Immediately!  The Spirit was there in rich abundance.  The Director from the Reorganized Church had tears in his eyes when he said that this was the most beautiful experience he had personally had in the temple.

It’s a simple thing.  Even a child can sing a hymn.  It takes only a few moments, yet it invites the Lord’s Spirit into our homes and into our lives.  I believe music is a gift from God, a part of His perfect wondrous world that He has shared with ours.  It can be a beautiful path of communication between the worlds.  So, go ahead!  Give it a try!  The hymns are a gift.  But their sweetness only blesses us if we use them.

I, too, have been inspired and uplifted by hymns that have come at a time when I really needed them. I am our ward chorister and have the opportunity to choose they hymns for Sacrament Meeting each week. I always pray before choosing the hymns for each month, and there have been several times when a particular hymn touched either mine or another person's soul. I love your suggestion about singing a hymn before praying. Thank you for sharing your story!

I continue to be grateful for your ability to turn simple stories into profound insights. Thank you for sharing your gifts with us!