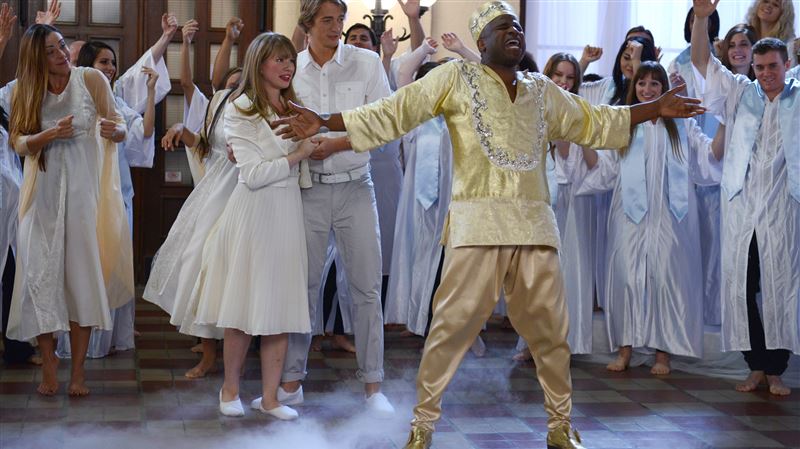 Several siblings leave heaven for Earth, experiencing together the struggles of mortal life in this musical interpretation of Latter-day Saint doctrine.

Mainstream audiences are likely unfamiliar with Saturday’s Warrior, but for lifelong Mormons the musical is a staple of their culture. Popular in the 70’s as a stage play, and again in the 80’s when it was filmed and released on video, there’s a certain Brady-Partridge-Osmond charm to the whole enterprise. This modern version has a more professional gloss than previous attempts and wisely dials down the cheese, but it retains a wholesome earnestness that will make cynics roll their eyes. If you’re open to it, however, the film may win you over.

The acting is surprisingly good, with believable characters and moments of real emotional resonance. The music pops, even if it’s sometimes apparent that it was studio-recorded and lip-synced on set (most musicals are, but here it’s more obvious). Attempts at comedy generally hit the spot. The film telegraphs its plot points early on through song and discussion in the “pre-mortal existence” scenes (arguably some of the film’s best moments), and anyone who’s ever cracked open a Bible will see where the “prodigal son” thread is going from a mile away. What the film lacks in surprise it makes up for in sincerity. Latter-day Saints who know their doctrine will tell you that the film takes some creative liberties, but as a primer on Mormon theology, and as a work in its own right, Saturday’s Warrior is moving and fun.

Saturday’s Warrior is rated PG. As part of a “prodigal son” tale, a father and son argue, the father slaps the son, and it’s strongly implied that the son becomes involved with drinking, drugs, and sleeping with a female band member, although none of that is explicitly shown. (Spoiler) A central character dies off-screen.

ANY WORTHWHILE MESSAGES FOR FAMILIES?

Families can be the source of our greatest joy and our closest relationships. Forgiveness brings peace. Every new child is a blessing, full of promise, potential, and opportunity. Follow your heart along with your head. Ignoring the counsel of parents often leads to heartache. God reveals himself to us one step at a time, as we’re ready. (See The Family- A Proclamation to the World)

Interested in Saturday’s Warrior? Try Pride and Prejudice: A Latter-day Comedy as well! Available to buy on Amazon.

Jonathan Decker is a licensed marriage and family therapist available for face-to-face and online sessions. He is a film critic for The KJZZ Movie Show. Jonathan’s book, 250 Great Movies for Latter-day Families, is available in paperback and Kindle. For more, please visit yourfamilyexpert.com.