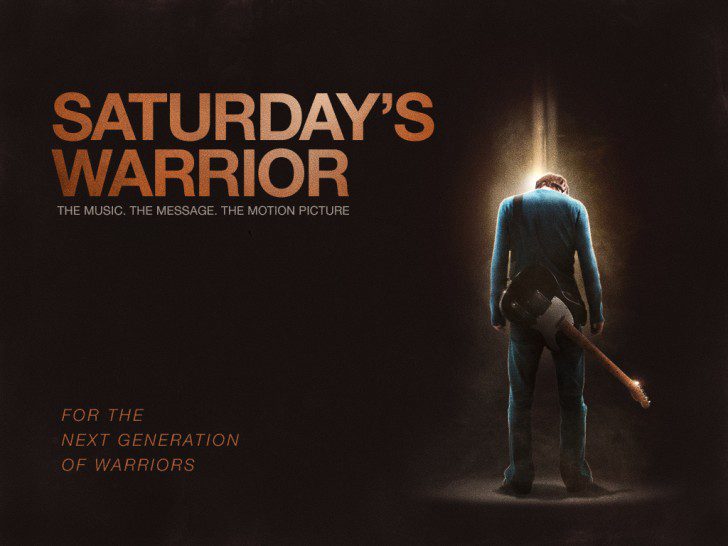 Saturday’s Warrior 2016: The Story behind the new Big-Screen Movie

“Do you even want all of these kids?” the clerk asked, as he stared at the young family.

The year was 1973, and composer Lex de Azevedo stood in line at a grocery store in Los Angeles. As the successful Music Director of the hit TV show, The Sonny & Cher Comedy Hour, he was no stranger to the mood and culture of the times. Having been raised in Southern California and lived there for most of his life, he was very much at home. However, this cavalier comment from a grocery store clerk took him aback.

He thought to himself: “Do we even want our children? How could you even ask such a question? These children are a gift from God. They are part of His plan!”

In that moment, the idea for Saturday’s Warrior was born.

As Lex witnessed the growing chasm between his LDS beliefs about life’s meaning, and the changing beliefs of the culture around him, he was troubled. For instance, the world’s answer at that time to many social problems was simply to limit the number of births, or as it was called, “zero population.” Lex, however, believed that the answer was not to limit the number of children coming to this world, but to understand why they were coming, and the purpose behind life. People needed to know that life began in a pre-mortal world. Families were an indispensable part of the Plan.

It wasn’t long before Lex began writing songs with lyricist Doug Stewart for a musical. Maybe, they thought, it would be something Ricks College would consider putting on for a few nights. Little did they know . . .

In 1974, the live stage musical of Saturday’s Warrior began. In Salt Lake City, there were 246 consecutive sold-out shows. In Los Angeles, audiences flocked to fill the huge civic auditoriums night after night. In Phoenix, Saturday’s Warrior sold more tickets in two hours than Elton John sold in two weeks. It was an LDS cultural phenomenon unlike anything that anyone had ever seen.

The musical was about a fictional Mormon family with a rebellious teenage son, and it struck a chord with audiences everywhere–Mormon or not. Thousands of Mormons brought their non-Mormon friends to the show as if to say: This is who we are. This is what we believe. This is how we feel.

Why the name “Saturday’s Warrior?” It was based on the idea that some of the most obedient, noble and valiant spirits in the pre-mortal world—the Lord’s warriors—were reserved to be born on earth in these latter days: the earth’s “Saturday” before Christ returns in glory on “Sunday.”

Saturday’s Warrior was light-hearted and funny at some times, gut-wrenching at others. It explored the doctrines of pre-mortal existence, eternal marriage, and the divine plan of happiness in a way that audiences loved. The music was contemporary, captivating, and heart-warming; people couldn’t stop singing it. Some scenes were serious: parents aching over the faith-crisis of their teenage son. Some were more tongue-in-cheek: playful sequences about how pre-mortal life might have looked. But ultimately, it resonated with people in a profound way, as if to reinforce their belief that there is more to this life than just this life.

When he was writing it, Lex wondered if people would come. Come they did, and for years. After several years of record-breaking attendances at theaters, another production company released their version of Saturday’s Warrior on VHS. This video of a staged performance introduced the Saturday’s Warrior music and message to another generation of LDS youth. For many, this is their only exposure to Saturday’s Warrior.

Over 40 years have passed since the debut of Saturday’s Warrior on the stage, and yet, scarcely a week goes by that someone doesn’t seek out Lex to tearfully tell him that it changed their life, or the life of someone near them. Many have even told Lex that they were born because their parents saw Saturday’s Warrior!

For many years, people have also asked Lex why he has not produced a film version of Saturday’s Warrior. It’s not that the opportunity never arose. After all, thousands of people have encouraged him to do it, including investors who have even offered financing. However, Lex never felt entirely comfortable with the idea of a film version for several reasons.

First, Saturday’s Warrior’s plot and story construction had been designed for the stage, and the characters largely were products of their time. Second, he felt that Saturday’s Warrior was a sort of “hallowed ground” because of all the lives it had changed. As such, perhaps it was a legacy best left alone. Third, if it were to be resurrected as a movie, it would have to been done right—with exceptionally good quality with a global distribution—and that would be very time-consuming and expensive.

However, last year, one morning he woke up with an impression. Even though he had resisted doing so for many years, he felt strongly that the time was now. The film of Saturday’s Warrior needed to be made. His initial reaction to that feeling was a resurrection of so many feelings that he had felt before: it simply couldn’t be done. Though he had tried to visualize what a film version would look like for many years, he had always ended up deciding against it. However, this time things were different.

Not long thereafter, Lex awoke with another idea: the solution for restructuring the plot so it would work perfectly as a movie. Rather quickly, everything began coming together, and Lex couldn’t help feeling that, after 40 years, the time was now right. He began preparations for the screenwriting and production process.

Today, less than a year later, the new script is all but finalized. Auditions and casting are almost complete. New songs have been written and recorded. Wardrobe and sets are being secured. A “dream team” production crew has been hired, including director Michael Buster. Purdie Distribution is now involved, the same company that distributed Meet the Mormons. News outlets are picking up the story. After 40 years, it is happening.

For Lex and countless fans, the time is right. It is time to make a new Saturday’s Warrior for a new generation, to bring back the magic of the beloved stage musical–and take it to the world. Not as a stage musical, but a big screen movie, complete with a live-orchestra sound track, celebrities, and technology that no one could have ever dreamed of in 1974.

Where will the money come from to make the movie all it can be—and to ensure that it has an impact like it did 40 years ago? Part of it will come from the multitude of eager fans of the original musical. The funding effort will be designed around letting fans be a part of the movie project and production, with “insider” information and involvement.

There’s a lot of excitement and speculation about the cast. Several celebrities are planning to be in the film, contingent only on the shooting schedule working with their existing obligations. Fans who are part of the fundraising campaign will be the first to know who the celebrity cast members will be. Some fans will get promotional rewards, like tickets to a premiere. Some will even be able to be in the movie!

In one very significant way, history will have to repeat itself for the movie to “go global.” Going global will take tens of thousands of people willing to share the fundraising campaign on social media—much like Mormons shared the original musical with their friends decades ago. Fans will be invited to be “Saturday’s Warriors” and do just that with this slogan: “The 1970s musical changed thousands of lives. Let’s change millions!”

Lex and his team of filmmakers firmly believe that Mormons will share Saturday’s Warrior’s message once again, and in an even more powerful way than they did 40 years ago. Why? Because the world needs to know, now more than ever, that there’s more to life than just this life.

Go to https://saturdayswarrior.com for information on how to be part of Saturday’s Warrior – The Motion Picture, Coming in 2016.

A Little Bird, the church does not endorse the private or commercial work of its members, good or bad. By the same token, it also doesn't credit individuals for work they do under the church's auspices. essay, "Saturday's Warrior" is a fictitious musical fantasy. It does not supplant personal prayer, personal scripture study or lessons with the full-time missionaries. Anonymous, I'm sure both Doug and Lex put many long and tedious hours into the collaboration process. I thank them both!

I have seen a number of productions of this play, in a number of states, and loved all of them. Various people have commented on "sticking more to doctrine" and no one has mentioned what we learned in Institute Class, way back when the play was first presented in Utah. Our instructor said that President Kimball said the Church could not put their stamp of approval on the play for one reason:" the little girl who said she would wait to come to a certain family, was something that was not correct; no one is given that choice." I loved the play so much and had wondered why the Church did not say something to promote it, and then this remark came in Institute Class.