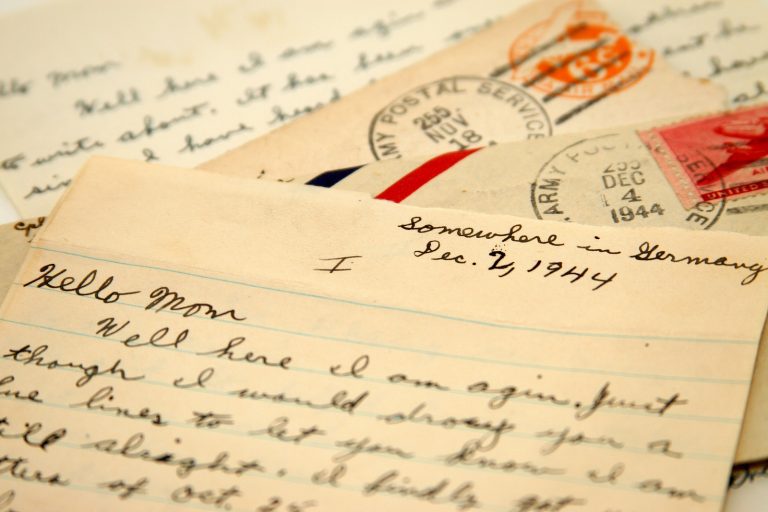 In honor of Memorial Day, we decided to bring back this wonderful piece from Robert C. Freeman from “Saints at War: Inspiring Stories of Courage and Valor” that describes instances of Latter-day Saint soldiers being spared by divine providence.

The need to include the topic of divine preservation was obvious for us from the beginning of our research. In 2001, Elder Neal A. Maxwell shared some of his World War II experiences with the Saints at War Project. As a young man fresh out of high school, he enlisted to serve in the army and soon after found himself thrown into the violence of Okinawa. During the interview, he shared a poignant experience and described a time when his parents prayed for him while his life was in peril. At about the same time, a story was sent to us from a German Latter-day Saint veteran of World War II by the name of Horst Hilbert. His account was similar to Elder Maxwell’s in the kind of experience shared. Both expressed sentiments that it was the prayers of their parents that preserved their lives. Ironically, these two men, one a future apostle, served on opposing sides of the war. Still, it seems, God was with them both in their moment of need.

On the third day of our advance, we watched a dogfight above us in the air. It soon turned out that our planes were getting the better of it. One German plane soared to the ground as it had been hit. We all stood up in a mass waiting for the smash-up, but instead the plane leveled off and photographed us and our position. It was not long before the guns began shelling us. The officer in charge gave orders that no one move. The shells were falling closer and closer. I began to do some praying. It seemed as if someone told me to move. I thought it was one of the soldiers lying near me. I turned and asked him if he had said anything. He said no. Another warning came, and I still ignored it. I still remembered the officer’s instructions. However, the third warning came as an ultimatum. I could not ignore this time. Throwing all caution to the wind, I jumped up and ran about one hundred yards to the left, expecting any moment to be reprimanded by my officer.

However, nothing was said. Perhaps he had not seen me. It seemed only a few moments when a shell landed right where I had been, killing two men and wounding several others. I couldn’t help but feel grateful in my heart that someone had warned me, and I had a pretty good idea who it was.

Prisoners of war of the Japanese suffered horrendous treatment at the hands of their captors, and Don was no exception. They had poor food and not enough of it; their everyday fare was a type of Japanese “radish” made into watery soup with very little nutrients in it and, if they were lucky, an occasional piece of fish. They had little, if any, medical care (he had malaria several times, plus other health problems) and inadequate clothing, especially in Japan, where he worked in extreme cold in a coal yard, shoveling and carrying coal in shoulder pole baskets. As an example of the inhumane treatment they suffered, prisoners on the voyage to Japan were crowded like livestock in the hold of the ship without sanitary facilities, food, or water. Some stayed alive by drinking their own urine.

Because of the deprivation and disease, Don’s health was ruined, and he died a little over a year after he returned to the States, six weeks before his and Rosemary’s little daughter, Candace, was born.

Upon his return, Don told of his “near-death experience.” He had had malaria and had been put in the “dead tent” (the Japanese had two large tents: one for the sick men and one for the dead ones). Don said his spirit had left his body and gone to the “other side,” where he begged “those in charge” to let him return to life long enough to bring his body back to the States and be able to see his loved ones once more. The next thing he knew, he was walking outside the dead tent. The Japanese guard said to him, “What are you doing here? You’re dead.” He replied, “I’m not dead.”

One evening, I was by myself in the remains of what must have been a two-story house. I was getting dressed for a night in the holes. After I was dressed and ready to go get my partner, I felt inclined to wait a moment. I waited three or four minutes. In a moment a few artillery shells burst about six feet directly in front of the door I would have come out of. The “door” was an army blanket fastened across the opening to the room. The blanket had four or five holes in it. These holes would have been in me had I gone out when I usually did after dressing for the night. I felt inclined to wait some more. I waited, and another artillery barrage came in. I then realized how nasty the Germans were. Had the first barrage wounded someone, the second barrage came just about the time when the medics would be helping whoever had been hit by the first barrage. After this second barrage, I felt it was O.K. to leave. I did so and went and got my partner for the night and went out to our hole.

Now to continue on with the story. At the very moment when the shooting started, an unseen influence (my guardian angel) took over and told me what to do. It seemed that I was back in Camp Haan and the sergeant was talking to me. He was saying such things as, “Now fall down to the left and roll over once. Now go forward four or five steps; then stand still for a moment. Now run five or six steps a little to the right, etc., etc.” I followed the instructions exactly. The shooting lasted about five minutes, then stopped as abruptly as it had started. We immediately started to dig a hole for protection.

The General Authorities of the Church recommended that all worthy young men eighteen and older should get their endowments before going into the service. Consequently, when I first arrived in Salt Lake from my home in Idaho, I called the temple to learn what time the temple opened the next morning. I was informed that it was closing after the last session that evening and would be closed for cleaning for a time. I said that I was supposed to go to the temple before going into the service, so I would call a taxi and try to get there before the last session.

I first went to get some garments and then went into the temple.  When I walked in someone said, “This must be him now, so we can start.” No one can know how impressed I was to know that they apparently had delayed starting the last session for just one person: me. The individual does count. After coming out of the celestial room, as I was heading for the stairs to go down and get dressed, a man in a white suit came up to me and said, “You are going into the service, I presume. I presume that because you are alone, so you’re not getting married, and you look too healthy to be going on a mission.” (At that time only 4-Fs [those not qualified for military service] were called on missions.) Then he added, “I would like to promise you that if you stay true to the vows you have taken in this temple this day, you will come back from this war without a scratch.” I didn’t know who that man was, but I believed what he said. I was fully aware that not every person is given that promise, but for some reason I was. Incidentally, my great uncle who was the patriarch of the Minidoka Stake in Idaho had given me the same promise just before I left Rupert.

During World War I, my uncle and five other young men were ready to leave Rupert, Idaho, for the army. My great uncle, who was then a bishop, felt inspired to give those six that same promise, by the power of the priesthood. They all did come back, and my uncle, who was one of the group, was a member of a company of about two hundred men. After one battle, he was the only one who wasn’t wounded, and two others were carried back on stretchers. The rest were killed.

I believed his promise. What a comfort that was, and what an incentive to live the standards the best I could. It was a great source of hope and of strength during the years I served. I can honestly say that I was never afraid. I wasn’t a fool who tried to bounce bullets off his chest to prove a point, but I was never filled with fear like the staff sergeant I knew who was sitting under a bush on Iwo Jima, white as a sheet and shaking like a scared rabbit. He was scared beyond control. I was, and am always, thankful to the Lord for that assurance I was given.

When we were aboard ship going into the Pacific war zone, I had mentioned that my bride was expecting a baby. One of the fellows thought I was very inconsiderate to get a young wife pregnant when I knew there was a likelihood that I might not return and she would be left a widow with a child. I didn’t tell them the source of my faith in returning, but I did say that I knew for sure that I would return.

One fellow said, “You may be sure, but a bomb that comes your way might not know that, and you will be killed along with the rest of us.” I responded, “If I see a bomb about to land on me, I will move real fast, and if it hits too close, then it will be a dud and not explode.” Some of us discussed such things occasionally, but no one ever questioned my belief since then.

Apparently someone was impressed by my determination to return home alive. I was assigned to the division message center on Iwo Jima, and one time as I entered to begin my shift, I heard one man say, “Well, I haven’t got a bit of faith, but Catmull’s got enough for both of us, and I’m staying mighty close to him.” He didn’t know I heard him say that, but I did notice that when I was on duty, he would stay there instead of leaving, and when he went to his shift, he would invite me to come with him. He loved coffee, and when they sometimes announced a wagon was coming with hot cakes and coffee, we would go. But if it was only coffee, I wouldn’t go, so he wouldn’t either, even though he just loved ” java” and seemed to never get enough of it. He also came back without a scratch.

Find “Saints at War” on Amazon and from the BYU Bookstore.

I love love these stories. They are so inspiring.