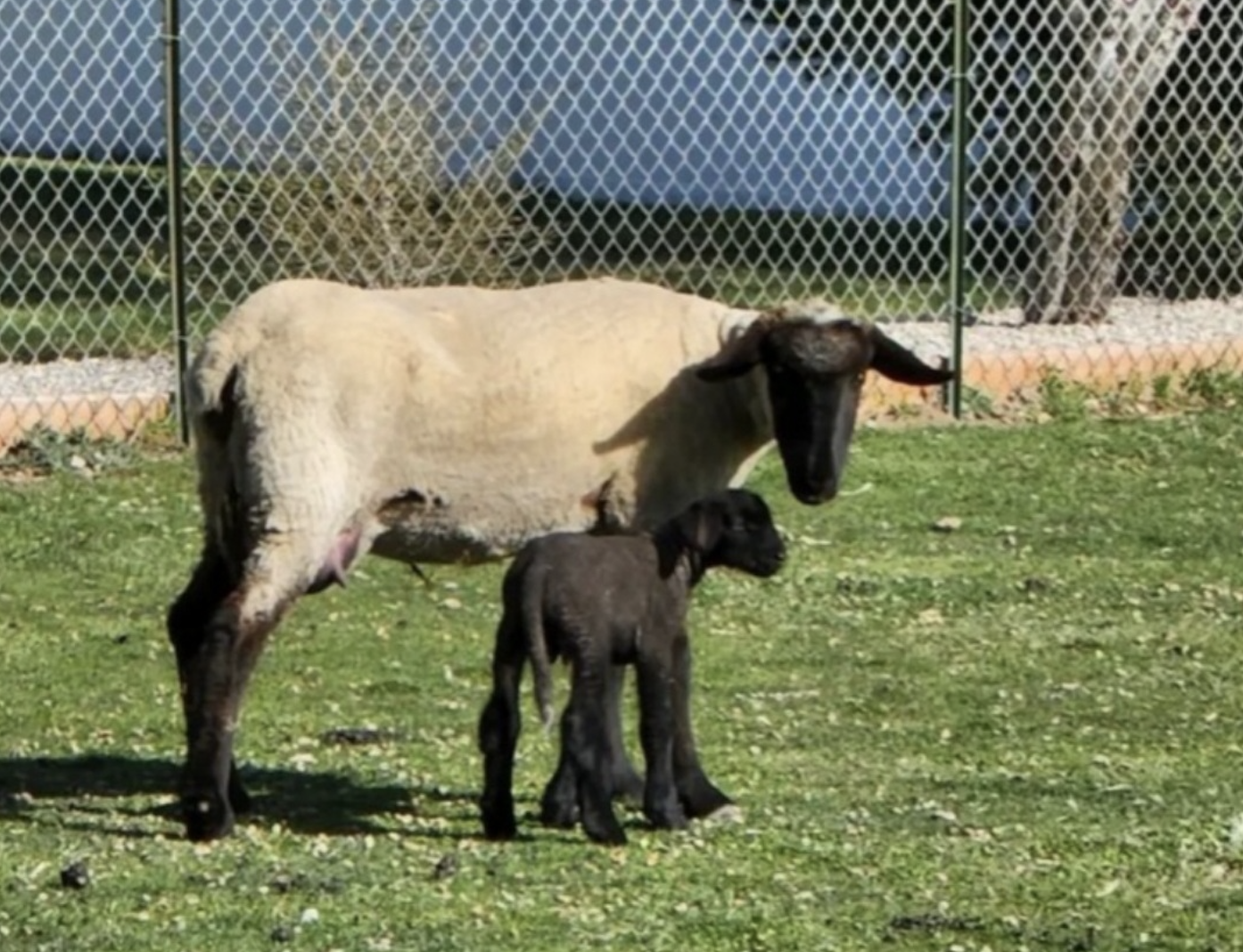 Sacred Symbols in the Sheep Shed

I thought I was done writing about sheep–I mean, you can only draw so many parallels between the wooly creatures and spiritual things–but the events of Easter weekend have unexpectedly filled my head with all manner of “sheepish” thoughts. It began last Saturday morning while my husband was outside pruning fruit trees and heard serious moans from across the pasture. Knowing that our ewe was due to deliver, Brad informed me that “Bertha” was in labor.

Half an hour later as I was washing the breakfast dishes, I glanced out the window toward the pasture, wondering if we needed to check on the ewe, when I spotted my husband’s sweatshirt through the opening of the red sheep shed and realized that Brad was already inside. Hastily drying my hands, I rushed out the back door, eager to see how the labor was progressing. I opened the pasture gate and attempted to enter, but our ram, Lucky, was unsettled by Bertha’s bellows and tried to butt me a couple of times. I hurriedly exited the gate and grabbed a thick flake of hay from a nearby bale, tossing it over the fence into a manger in order to distract Lucky.

While the ram was busy eating, I slipped into the sheep shed where the ewe had bedded down in the straw, now in the throes of active labor. My husband and I have had many experiences with sheep over two decades, but neither of us had witnessed the birth of a lamb. The next twenty minutes were both sacred and intense as we watched the struggle. I found myself breathing in rhythm with the writhing ewe, and–having given birth to five babies myself–my mother heart felt every strain and groan. The pushing stage stretched on and on, with minimal results. Just when I thought we might have to help pull the baby free, the ewe gave one last mighty push, and delivered a small black lamb.

During my time in the sheep shed, as I witnessed both the agony and the miracle of bringing forth new life, my head spun with symbols and images from recent scripture study:

It was hay and a manger.
It was Christmas; it was Easter.
It was the Passover and the temple all tumbled together.
It was blood and water and spirit.
It was birth and rebirth.
It was the Good Shepherd watching at the door of the sheepfold.
It was a mother bringing forth her firstborn son.
It was a male lamb, of the first year.
It was the bone-deep relief of the ewe, and the Savior declaring, “It is finished…” (John 19:30)
It was the Deliverer and the sacrificial Lamb.

My heart was very tender as Brad and I watched the new mother meticulously clean her baby. We were amazed that the lamb attempted to stand within minutes of his birth. He clumsily made his way over to my husband and flopped down next to his long, jean-clad leg, resting there while we stroked and kissed the dark wool of his head. What a privilege to witness this birth, to revel in the miracle of a precious new life.

Eventually, I crawled out of the sheep shed, wiping happy tears from my cheeks and straw from my hair and clothing. My heart overflowed with all of the spiritual symbolism of the experience, and my testimony of Jesus Christ was deeper than it had been an hour before.

As I made my way to the house to wash up, a memory surfaced. I recalled listening to David Butler share his imagined version of an interchange between Adam and an angel, after Adam and Eve were cast out of Eden.

Brother Butler pictured Adam and Eve turning back, “…almost as if their question was, ‘How do we get back? We’ve left [God’s presence], we’re cut off, we’re mortal, we’re thorns and thistles. How do we get back?’ That’s their question. And an angel comes with the answer and he says, ‘I want you to offer sacrifice…I want you to take the firstlings of your flock and sacrifice them’…and the angel comes after many days and says, ‘What are you doing?’ And [Adam] says, ‘I don’t know…you told me to do this.’

“And, essentially, the angel says back to him, ‘This is the answer to your question. Your question was, “how do we get back? how do we overcome this?” And the answer is: it will be through the sacrifice, the blood, the heartbreaking death of an innocent creature. This thing you’re doing is…showing you the solution, it’s in similitude of the sacrifice of the Only Begotten… There is a solution to this, and His name is Jesus. And it’s through His sacrifice that you’ll return to Eden (God’s presence) someday.” Brother Butler concluded by saying, “Even today, on our next Sunday, you will walk into the chapel and there will be an altar (Sacrament table), and your question will be, ‘How do I get back? How do I overcome this?’ And the answer will still be the same…the sacrifice of the Lamb of God.” (1)

Once again, the sheep of my pasture have taught me a lesson, have strengthened my faith in God’s beautiful plan of life and death, and of Easter’s hopeful message of spiritual and physical rebirth. May I never miss the symbolism in the temple–the altar, the sacrifice that prepared a way for us to return to God’s presence. May I never miss the symbolism of the Sacrament. May I never become so casual about partaking of the bread and water that I fail to see beyond the symbols to the spiritual truths they represent–to the Sacrificial Lamb who placed Himself on the altar and arose as our Deliverer.

How incredibly timely and filled with symbolism was your experience. Thank you for sharing the story through words, pictures and testimony.

Beautiful and tender! Thank you for your amazing understanding of the love of God!