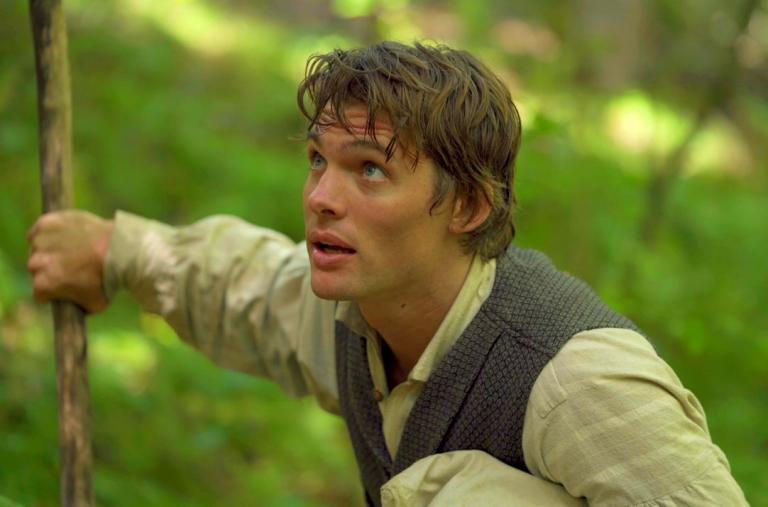 Later estimates of the weight of the gold plates of the Book of Mormon (by those who had briefly held them, such as the official witness Martin Harris and the unofficial witness William Smith) put that weight at somewhere in the range of forty to sixty pounds.  Some critics, accordingly, have contended that Joseph Smith could not have carried them for any significant distance, let alone run with them through the woods.  The plates — if they actually existed and weighed as much as the witnesses say they did — were simply too heavy.  Thus, these critics argue, at least that portion of his story must be fraudulent.

With that argument in mind, I call your attention to a scene from the Interpreter Foundation’s Witnesses film project that depicts Joseph Smith, played by Paul Wuthrich, being chased by money diggers while he’s carrying the plates.

It appears briefly in the official trailer for Interpreter’s Witnesses theatrical film and is shown at relative length in the “overview” that is now available on the website of Interpreter’s docudrama, Undaunted:

I was not present on the outdoor “set” for that day’s filming, but here’s some background on the scene that is directly relevant to the critics’ argument.  It’s based on communication with Russell Richins and James G. Jordan, who are, respectively, the producer and associate producer of Witnesses: Filming “Joseph Smith” with the plates, and running from and interacting with the attackers, took a considerable amount of time.

Knowing that filming the scene of Joseph running with the plates would require several hours, Paul Wuthrich was presented with the option of going with something lighter as a prop. He opted to use the two prop sets of plates that metallurgist Dave Baird had created, based on Baird’s careful research.  Somewhat amusingly, one set came to be called the “non-hero set.”  They weighed somewhere between thirty (30) and thirty-five (35) pounds.  We’re more certain of the weight of the other set — unsurprisingly labeled the “hero set” — because Russell Richins weighed them himself.  They came in at forty-five (45) pounds.  In other words, at roughly the weight of the historical plates themselves.

During the relevant filming day, the two sets were switched out at various times.  Sometimes the secondary or “non-hero” prop was used, and sometimes the “hero set.”  “At all times,” comments Russell Richins, “when you see Paul Wuthrich running or using the plates in the scenes, he is using one of these two sets. Bottom line, Paul was in very similar circumstances that Joseph Smith faced except for this one exception – – Paul Wuthrich did it over and over and over again throughout the day.  Yes, he was exhausted, but he did it.  A whole crew witnessed it.”

Those who have not been involved with filming of this sort would, I think, be astonished at how many takes and re-takes need to be done for even relatively simple indoor scenes.

Whether they want to accept it or not, people are going to have to face the fact that Joseph Smith, used to day labor and a very fit individual known for his strength, was fighting for his and the plates’ safety, perhaps even his life.  Additionally, this claim would have been quite achievable for many young men of his time. Even Martin Harris lifted the plates, as did eight other rural Americans.  People must remember that Martin Harris was older, but a farmer used to working physically.  This was very common.Another interesting tidbit is that Annie Passman, about 16 years of age and playing Joseph Smith’s sister Katherine, lifted the hero, 45 pound, set of plates from the floor to the table throughout the entire day as we ran that scene many, many times while filming.  Was it tiring?  Yes.  Was it doable?  I think we have proven that clearly, in both cases.

And we’re not even invoking supernatural or divine aid.

If you have ever split wood or used a chainsaw, you will know that an afternoon of cutting, lifting, and stacking firewood can be exhausting. The Smith family would have been doing that (minus the chainsaw) for hours, day-in and day-out. Lifting 45 pounds is not impossible. How many moms pick up their young kids at that weight? Joseph Smith with his size and strength could have done that easily. Keeping the plates safe: The original CrossFit!

Thank you! I agree with Alece. Fearing for his life and on such an important errand from the Lord, he would definitely have the strength to do such a feat.