Rome Temple Dedication Journal—Day 4: “The Word of God is Not Chained” | Meridian Magazine 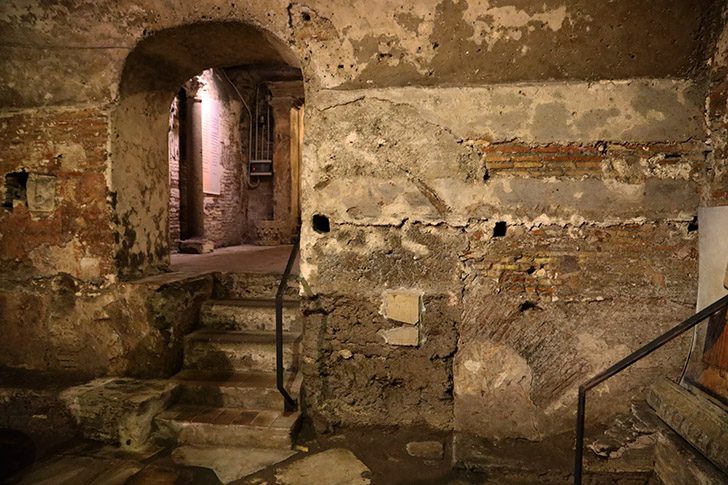 Rome Temple Dedication Journal—Day 4: “The Word of God is Not Chained”

I love those moments when a scripture story suddenly leaps off the page for you and the prophets become living people who suffered and breathed and suddenly there is context for all they did. That happened for us today as we took a few hours off from reporting on the temple dedication and headed to downtown Rome.

Ugo Perego, who is the Institute Director in Rome, took us to the lowest level of the Santa Maria in Via Lata church, where tradition holds that Paul lived while he was on house arrest in Rome. Because he was a Roman citizen, he was granted certain privileges, though he apparently had to pay for his own house and guard.

Luke, who was his advocate and friend, wrote the book of Acts, from the things that Paul told him, but the book suddenly ends with the words, “And Paul dwelt two whole years in his own hired house, and received all that came in unto him” (Acts, 28:30) We just don’t have details.

Ironically, it is Paul, himself who tells us more in Colossians, Ephesians, Timothy and Philemon. He ends Colossians with the words, “The salutation by the hand of me Paul. Remember my bonds. Grace be with you.”

On the wall in this stark gray room of ancient stone is a sign that reads, “Remember Jesus Christ, raised from the dead, a descendant of David, such is my gospel, for which I am suffering, even to the point of chains like a criminal. But the word of God is not chained” (2 Timothy 2:8,9).

Tradition has it that Paul was beheaded by Nero, and it was extremely moving to be in the place he might have been, chained, imprisoned and under house arrest. Even still his faith in the Lord Jesus Christ was unbounded and he preached without shrinking.

I liked being in Paul’s house today more than I liked eating gelato.

We arose while it was still dark and drove to the temple grounds to be there for first light. As a blue, cloudless dawn melted into a sunrise, our fingers and toes became numb with the cold. My teeth chattered as I walked around the temple grounds and took in the stillness. Catching the first light of the morning on the grounds of the temple was breathtaking. The workmanship is an artistic miracle (see our Story Highlights on our Instagram @ldsmag for a video of the morning).

Thankfully, the day warmed up as I took on the task of doing some street interviews with Elder Di Liberto from Milan and Elder McConkie from Maryland in a park not far from the temple. I was curious to film what reactions people have in the community about this new presence in their community.

I felt like a missionary again as we strolled up to strangers and began talking to them, creating conversation out of thin air. If it is not already intimidating to be approached by two men in suits, imagine adding a camera to the mix—that’s extra intimidating. We got a wide spectrum of responses from some people walking by without responding to us to people who were extremely sincere and interested to know more.

If there is one thing that I’ve learned, it is that Heavenly Father is a perfect orchestrator. He knows how to place His children in each other’s paths. As we walked around, one woman sitting in the grass stood up to talk to us and told us her neighbor went to the temple open house and told her how incredible it was. She asked if she could learn more and wondered if the missionaries visited her if she could bring her children to listen, too. You better believe that video interview turned into a referral for the sisters.

After talking to quite a few people, we not only had some great footage for the video (watch for it at www.latterdaysaintmag.com/rome), but we got two solid contacts who are interested to learn more. That is what is so beautiful about this temple—it is opening up conversations with strangers who may not have readily sought the missionaries or the gospel before. People are asking about this “bella” structure (“bella” is “beautiful” in Italian—the most common answer when people are asked about their impressions of the temple) and wondering what the Church behind it really believes. The Elders reported that in one ward in Rome alone, the missionaries have received over 200 referrals from people who have visited the temple.

The temple seems to visibly be hastening the work, not only for those on the other side of the veil but from those on this side as well.

March 5—Is the work about to take fire in Italy?

We’ve seen a number of missionaries wherever we have gone today.  We love these bright spirits.  When we first arrived on the Roman Temple Square there were about 20 new elders and sisters who had been in country for less than one day. They started their mission by studying their scriptures for a short time at the feet of the statues of Jesus Christ and His original twelve apostles.  That was a tender scene.

Today we saw four sisters and two elders (from Utah, California, Texas and Italy) on the street just getting out of their district meeting.  They said the work is going great and the presence of the new Temple has opened up so many more conversations and lessons.  There is something in the air here in Italy with regards to the work of the Lord.

Though the locals and the Catholic Church have been so gracious to the Church and the building of this Temple, many tell us that no temple has received so much opposition from the adversary as this one.  That’s always a good sign. Brigham Young said that whenever the Saints of God go to build a temple, all the bells in hell start ringing.  “I want to hear them ring again!” he said when he emphatically declared his intention to build the Salt Lake Temple.  There is no exception here in Rome.

We talked to a number of people on the street today and every one of them knew about the new Temple.  They like it very much and some of them were able to go through it during the open house.  Of course, these were people who live in the vicinity of this new House of the Lord.  What about others all over Italy?  There is much work to be done.

There is an excitement in the air through it all.  Rome itself only has two stakes and yet here is this magnificent structure placed in their midst, almost like a gift from heaven.  It’s as if the Lord is saying, “Here is how I see my children here in Italy. Magnificent.  Deserving.  Worthy.  Celestial.  The Lord is setting a new bar for the people and I believe they are rising to it all over this beautiful country.

March 4—This was not a coincidence.

I love to see the Lord’s small and intricate tender mercies. These are not always about big things. Sometimes it is just a little thing, arranged for your joy or a tap on your shoulder where He says, “I see you.” “I am here. I am in this.” These are His divine signatures. You can tell because they look like “coincidences”, but they would have never happened on their own. When you stop to look at it, you realize your entire life is flooded with these “coincidences.”

We saw that tonight. We left yesterday morning for Rome, coming here to cover the temple dedication March 10-12. We arrived 4 hours later than planned because there was such a line up at the Philadelphia airport to de-ice our plane’s wings.

By the time we rented our car, found our AirBnB, and closed our eyes for two hours in Rome, we were ready to try and catch the sun setting behind the temple. Our first glance of the temple was all that we thought it would be, and we began calculating what would be the best angle to catch its radiance with a camera. We’d been working for weeks to try and locate the best people to interview to tell the rest of the story.

Then we headed for pizza—of course. As we were at the counter trying to determine what was on the slabs of pizza before us, a woman walked by us. She looked American, so we thought of asking her if she had been here long enough to translate for us. But wait, she also looked like a Latter-day Saint. In fact, we were sure of it.

We asked her, and she was! Not just anybody, the new temple matron. Craig and Julie Pacini are the new Rome temple president and matron and they were at the same pizza place at the same time we were. Of course. Because temple presidents can’t give interviews, we asked them if they had discovered the best angles and locations for capturing images of the Rome Temple. As it turned out Julie is an excellent photographer. She had a map showing us exactly where to go. Even more important, she had taken some photos that were so unique, we asked her if we could use them in our story on Niels Valentiner, the temple architect. She said “yes” and two of her photos are featured in today’s cover.

I can't tell you how much I love your reporting from Rome! And now I'm standing in a long checkout line overcome with emotion at this picture of you three at the airport. Michaela reminds me so much of her oldest sister. I'm pretty sure I have numerous pictures of her in that same pose. Thank you for sharing so much of yourselves with us!

I served as a missionary in the Italy Rome mission 1974-1976. Rome now has two stakes - when I was there there was just one branch in Rome! What growth!