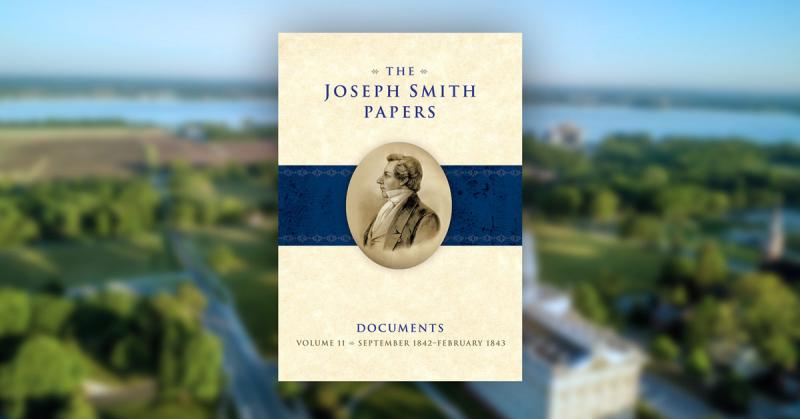 The Joseph Smith Papers Project has published the newest volume in the Documents series of this monumental documentary history undertaking of The Church of Jesus Christ of Latter-day Saints. The Joseph Smith Papers, Documents, Volume 11: September 1842­–February 1843, edited by Spencer W. McBride, Jeffrey D. Mahas, Brett D. Dowdle, and Tyson Reeder, historians for the Church History Department, compiles “105 letters, sermon accounts, poems, legal records, and other documents from” this period of Joseph Smith’s life and prophetic ministry. “In this trying period, Joseph Smith continued to lead the church and the city government of Nauvoo as opponents sought his arrest and extradition to Missouri.” What emerges from the documents featured in this volume relating to his arrest and extradition attempts, according to Mahas at an online blogger event held last Thursday in anticipation for this week’s publication of the volume, is “a case study in how Joseph Smith responded to opposition.” As explained in the volume’s introduction, “The six months between September 1842 and February 1843 were a turbulent period of Joseph Smith’s life.”1 Not only did the Prophet become embroiled in legal and political maneuvering to evade his determined enemies during this time, but the arrival of new converts, the growth of Nauvoo, and important doctrinal developments added pressure as he juggled his civic and ecclesiastical duties.

Joseph Smith and the members of the Church of Jesus Christ of Latter-day Saints in Nauvoo, Illinois, were on high alert in September 1842. Three months earlier, John C. Bennett—a member of the church’s governing First Presidency and the mayor of Nauvoo—left the church, resigned his civic office, and departed the city, and he was now publishing incendiary accusations against Joseph Smith and the Saints. These accusations fueled rising animosity toward the church throughout the country and prompted legal action, leading authorities in Missouri and Illinois to seek Joseph Smith’s arrest. Their efforts and Smith’s resulting legal appeals hindered his ability to lead the church and the city government of Nauvoo. The 105 documents in this volume of The Joseph Smith Papers chronicle the ways Joseph Smith and others continued the work of growing the church and building the city of Nauvoo amid these and other trying circumstances.2

It was in this setting that the Prophet “wrote two significant letters to the church regarding baptism for the dead” that are included in the volume. Now canonized as sections 127 and 128 of the Doctrine and Covenants, these two letters (the manuscripts of which can be accessed on the Joseph Smith Papers website here and here) “provided instruction about the practice in past Christian eras and direction on systematizing the procedure for recording the ordinances, including what information the general church recorder was to include in the general church book. Smith emphasized that it was the will of God to keep precise records of the baptisms for the dead that church members performed and that such a record, faithfully kept by a recorder, would constitute an offering to God and a record in heaven.”3 As revealed by these and other documents featured in this volume, even while having to endure severe opposition Joseph continued the execute his prophetic duties by providing instruction to the Saints on important doctrinal and ecclesiastical matters.

But besides records that shed important light on Joseph’s legal dealings, other documents in the new volume highlight his humanity and personality. This includes the notes that captured a discourse the Prophet delivered on October 29, 1842. On this day Joseph “publicly addressed a group of recent newcomers to Nauvoo . . . explaining procedures for purchasing land in the city.” Some of these newcomers were frustrated with the complicated process for purchasing land, while others “had become disappointed upon arriving in the city because some of the Saints’ conduct––including that of some city leaders––did not meet their high expectations.”4 It was with these legitimate concerns in mind that the Prophet frankly confessed that “he was but a man and they must not expect him to be perfect; if they expected perfection from him, he should expect it from them, but if they would bear with his infirmities and the infirmities of the brethren, he would likewise bear with their infirmities.” As volume editors McBride and Dowdle explained at last week’s blogger event, it is in this document and others in the volume (such as the many financial records featured therein) that Joseph’s sincerity and goodwill shine through. “You see Joseph’s trusting and generous nature in his legal and business transactions and in his discourses,” remarked Dowdle, “in stark contrast to the image of him circulating then and now as a charlatan trying to swindle everybody.”

Those interested in Book of Mormon geography theories will also be interested in Documents, Volume 11 since it includes excerpts from editorials that appeared in the Church’s newspaper, the Times and Seasons, during this time. Joseph served as the editor of the paper for the September 15 and October 1 issues that reprinted extracts from John Lloyd Stephens’s immensely popular (and groundbreaking) work Incidents of Travel in Central America, Chiapas and Yucatan and offered speculative thoughts on Book of Mormon geography in Central America.5 Apostles “John Taylor and Wilford Woodruff assisted [Joseph] with his editorial responsibilities” during this time, and may likely have contributed to these and other editorials that appeared in these issues of the paper. “While it is unclear how involved [Joseph] was in preparing [these] particular issue[s], he nevertheless assumed editorial responsibility for . . . all issues produced during his time as editor.”6 As McBride clarified further at the blogger event, historians know that Joseph was the editor of the Times and Seasons at this time, but there is uncertainty to the extent to which he was involved in the day to day operation of the press, which had largely fallen on Elders Taylor and Woodruff. “We know that in August and September of 1842, even while in hiding to avoid arrest, Joseph was in and around Nauvoo, had access to friends and clerks, sent communications, and recorded important things,” McBride mentioned. “So it is feasible that he was still involved with the Times and Seasons, was aware of what was going on with the paper, and could provide feedback if he desired. But there is still some ambiguity in the timeline and in the documentary record for this period.” Scholars continue to explore the intellectual history of Book of Mormon geography theories, including Joseph Smith’s own views on the matter.7 What is clear from these editorials is that Joseph and his clerks responsible for the published content in the Times and Seasons to an appreciable degree thought “that these discoveries provided evidence that the Book of Mormon, which presents itself as a history of ancient inhabitants of the Americas, was in fact a revelation from God.”8

This new volume of the Documents series (the eleventh out of fifteen planned volumes in the series) offers valuable insight into Joseph Smith’s life for both average Latter-day Saints and professional historians. McBride feels that this volume is especially relevant for scholars interested in the political system of Nauvoo and Joseph’s political and legal behavior during this time, while Dowdle emphasizes that “Church members will appreciate the evidence that Joseph and the Saints in Nauvoo were constantly exerting effort to make things work” even when they came up short, made mistakes, or faced opposition and setbacks. “We should not be afraid of ambiguity and complexity with our past,” McBride stressed. “Everybody’s past is messy, and we should learn to be comfortable with sometimes saying ‘we don’t know.’ That can be hard for some Church members, but I think it’s ultimately good for our faith when we can embrace ambiguity or complexity in our history when it’s necessary.”

Documents, Volume 11 is now available for sale at Deseret Book and other retailers.