“Remember This Day, in Which Ye Came Out from Egypt” — Exodus 7-13 | Meridian Magazine 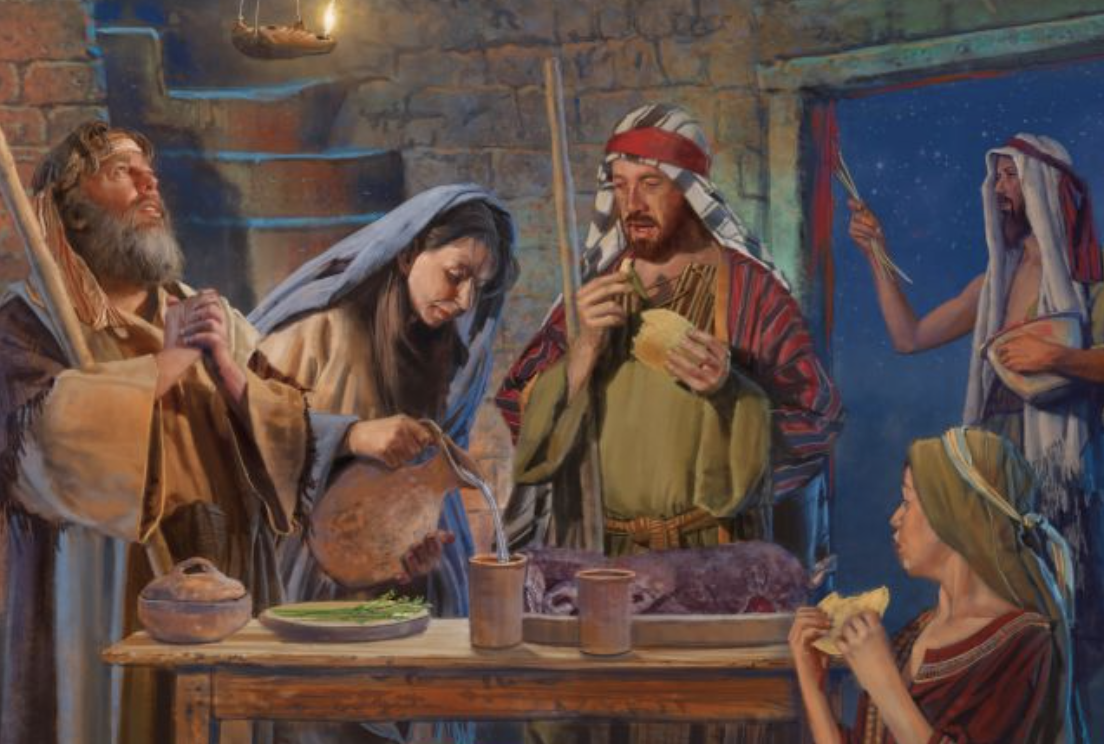 Cover image: Illustration of a Passover supper, by Brian Call.

For covenant Israel, the Passover feast marks the end of winter and the arrival of spring. Called the “festival of freedom,” this day celebrates the escape of the house of Israel from captivity in Egypt and the proclamation of “liberty throughout all the land unto all the inhabitants thereof” (Lev. 25:10). It is “the grand event which underlay the whole history of Israel, and marked alike their miraculous deliverance from destruction and from bondage (Alfred Edersheim, The Temple: Its Ministry and Services, Peabody MA: Hendrickson Publishers, Inc., 1994, 163).

It is also a feast of purification, when Jews destroy any leaven in their possession and, anciently, went up to the temple to offer sacrifice of a lamb or goat without blemish. A purulent mass of fermenting flour, leaven (chametz) signified personal corruption. Eliminating it was a token of repentance, as no unclean person could approach the temple. Of course, the lamb symbolized the Atoning Savior who brings remission of sins to the repentant.

When a family would bring a lamb to the temple, the priests would slaughter it and capture its blood in a special vessel called a mizraq, a bowl or basin designed for tossing or throwing a liquid. Solomon made these bowls of gold especially for this service (1 Kings 7:50). The priests would then form a line and pass the bowls of blood from one to another until the last one in line dashed the blood against the altar. In this way all the covenant faithful were ritually purified, as Paul explains: “Almost all things are by the law purged with blood; and without shedding of blood is no remission” (Heb. 9:22).

Israel celebrated the Passover only once during the forty years of the Exodus—near the beginning of the trek. God ordered them not to offer up the Passover sacrifice until they arrived in the Promised Land. After that, the seven days of unleavened bread between the first and eighth days of Passover reminded Israelites of their wandering in the wilderness and, for us, symbolize our journey through mortality.

Traditionally, Jews eat a festive meal (seudah) on the last day of Passover to which they invite strangers and the unfortunate. They read passages from the Bible that refer to the coming of the Messiah: “The wolf also shall dwell with the lamb, and the leopard shall lie down with the kid . . . and a little child shall lead them. . . . And he shall set up an ensign for the nations, and shall assemble the outcasts of Israel, and gather together the dispersed of Judah from the four corners of the earth” (Isa. 11:6, 12). The Passover is a time for welcoming all the repentant from every nation into the kingdom of God.

Before the Messiah comes again, the earth must be purified of all corruption, so in the book of Revelation, the apostle John watches as angels purge out the “leaven” of the wicked.  “And I saw another sign in heaven, great and marvellous, seven angels having the seven last plagues; for in them is filled up the wrath of God” (Rev. 15:1). We are reminded that Jesus referred to harmful false doctrines plaguing Israel as “the leaven of the Pharisees and the Sadducees” (Matt. 16:6, 12).

This purification of the earth will be catastrophic for the wicked. In the time of Moses, the Lord warned Israel to remember the plagues He brought upon Egypt: “If ye walk contrary unto me, and will not hearken unto me; I will bring seven times more plagues upon you according to your sins” (Lev. 26:21). He swears to “bring upon thee all the diseases of Egypt” (Deut. 28:60). Sinful behavior brings upon us spiritual if not physical “plagues of Egypt.”

As with the plagues of the Exodus, the plagues of Revelation are the natural and expected destiny of those who refuse to repent. The great French theologian Jacques Ellul says, “It is not the plagues themselves that are the judgment: it is the fact that man sounds the most profound abyss of evil, of perdition, of remoteness from God, of dehumanization, of slavery. . . . When he blasphemes he manifests how far he is from God, which is to say that he proclaims his own perdition, his definitive death. . . . Man is not condemned; he condemns himself” (Apocalypse: The Book of Revelation, George W. Schreiner, trans., Eugene OR: Wipf & Stock, 1977, 177).

In Revelation, angels file into the heavenly throne room dressed in priesthood robes, “clothed in pure and white linen . . . girded with golden girdles.”  They carry “seven golden vials full of the wrath of God” while the incense offering fills the temple with “smoke from the glory of God” (Rev. 15:6-8). In the ancient temple of Jerusalem, just as golden bowls of incense represented the prayers of the saints, other golden bowls, the mizraqim, captured the blood of the Passover lambs to be sacrificed quickly as the sun goes down. The temple priests splashed the bowls of blood against the holy altar in an act of ritual purification; likewise, the seven angels of Revelation pour out their vials upon the earth to cleanse it of corruption.

During the sunset hours in Gethsemane, Jesus “sweat great drops of blood” as He underwent the Atonement for our sins (Luke 22:44). At the same moment, just across the Kidron valley, pilgrims were crowding the temple courts sacrificing unblemished lambs, and the priests were capturing the purifying blood. Then the lambs were sacrificed and eaten. Earlier that evening, Jesus had invited his followers to eat of his flesh and drink from the cup that was “the new testament in my blood, which is shed for you” (Luke 22:19-20). Depending on our spiritual state, the blood is a “pollutant or a detergent”—it can be a token of purification or of the wrath of God. Although the bowls of blood in the temple are poured out for mercy and atonement, the bowls of the seven angels are poured out to decontaminate the earth.

For us, the sacrament is our Passover. Elder Jeffrey R. Holland said, “With a crust of bread, always broken, blessed, and offered first, we remember his bruised body and broken heart. . . . With a small cup of water we remember the shedding of Christ’s blood and the depth of his spiritual suffering, anguish which began in the Garden of Gethsemane.

“Perhaps we do not always attach that kind of meaning to our weekly sacramental service. How sacred and how holy is it? Do we see it as our Passover, remembrance of our safety and deliverance and redemption? With so very much at stake, this ordinance commemorating our escape from the angel of darkness should be taken more seriously than it sometimes is. It should be a powerful, reverent, reflective moment. It should encourage spiritual feelings and impressions. As such it should not be rushed. It is not something to ‘get over’ so that the real purpose of a sacrament meeting can be pursued. This is the real purpose of the meeting. And everything that is said or sung or prayed in those services should be consistent with the grandeur of this sacred ordinance” (“This Do in Remembrance of Me,” General Conference, Oct. 1995).

Like the children of Israel in Egypt, the saints in the latter days will celebrate when Jehovah appears to free the earth from the bondage of Satan. In Egypt, when the Lord saw the blood of the lamb “upon the lintel, and on the two side posts,” He passed over and did not “suffer the destroyer to come in unto your houses to smite you” (Exod. 12:23). Similarly, the children of Israel of the latter days will experience another “Passover”: although they will pass through intensifying tribulation, the destroying angel will pass over them if they have applied to themselves “the atoning blood of Christ” and become saints (Mosiah 3:18; 4:2).

(Excerpted from the forthcoming book The Bright and Morning Star: Finding and Following Jesus in the Book of Revelation, by Breck England.)