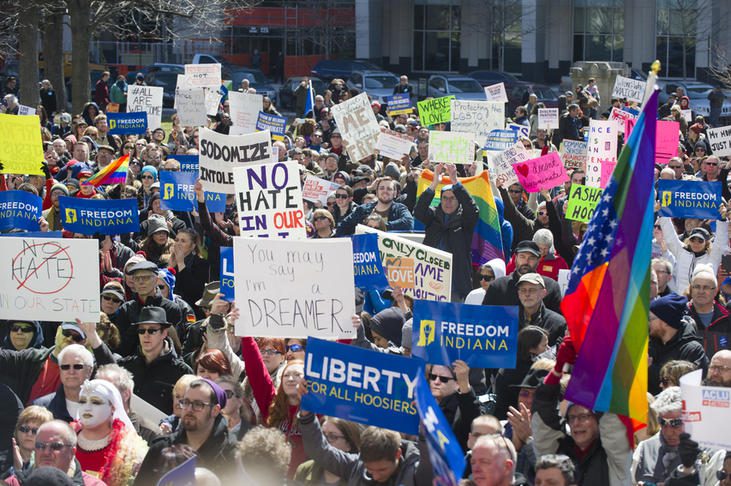 Religious Freedom Advocates are Divided over How to Address LGBT Rights

Major players in the ongoing battle over religious freedom and LGBT rights will meet at Yale University this weekend. They’ll discuss the current state of conscience rights and LGBT protections and debate what legislation is needed to balance those competing interests.

Faith leaders and LGBT activists attending the event aren’t the only ones in search of consensus since the Supreme Court legalized same-sex marriage a year and a half ago. The meeting is actually a response to in-fighting within the community of scholars, lawyers and policymakers who once worked together as religious freedom advocates.

“We all think … the view that nondiscrimination protections must crowd out every other value is wrong, but we have different visions of the right,” said Robin Fretwell Wilson, director of the family law and policy program at the University of Illinois College of Law and one of the meeting’s organizers.

Wilson is a leader of what has been labeled the “Fairness for All” camp, working with lawmakers across the country to enact laws, like the Utah Compromise, that balance sexual orientation and gender identity, or SOGI, antidiscrimination laws with exemptions to protect the conscience rights of faith communities and religious business owners.

The other side, populated by prominent scholars and traditional marriage supporters like Robert George of Princeton University and Russell Moore of the Southern Baptist Convention’s Ethics & Religious Liberty Commission, rejects SOGI protections, calling for stronger religious freedom laws rather than Fairness for All legislation.

The latter group of religious freedom leaders recently outlined their arguments in a public letter, titled “Preserve Freedom, Reject Coercion.” “Proposed SOGI laws, including those narrowly crafted, threaten fundamental freedoms, and any ostensible protections for religious liberty appended to such laws are inherently inadequate and unstable,” the letter reads.

The problem is that many use the mantra of religious freedom to justify their prejudices and bigotry. Muslims can't refuse to serve Jews or Christians, and members of the Jehovah witnesses can't refuse to offer health care. Everyone should read Alma 1:19, which talks about persecuting nonmembers.