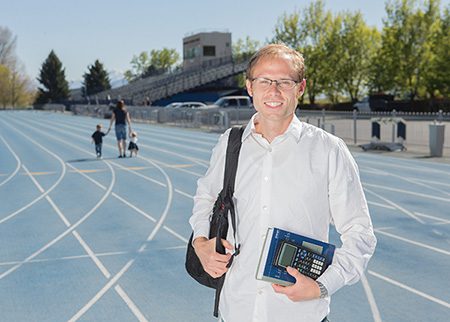 Don’t be surprised if Jared Ward runs a victory lap around campus in his cap and gown after graduation.

Everything in Ward’s life – even his thesis for his master’s degree in statistics – all comes back to the track.

But the course of his college career hasn’t exactly followed the familiar oval, counter-clockwise trajectory. In fact, it’s proved to be very different than what he expected.

Following his mission to Pittsburgh, Pennsylvania, Ward wanted to get his waist size back to normal. So he innocently participated in a fun run in California while his high school-aged brother raced.

The NCAA ruled that by running in that race, Ward was delaying enrollment in school and training to gain a competitive advantage. BYU fought the ruling, but Ward lost a year of eligibility and his first year on the BYU cross country team.

Although disappointed, Ward carried on and contributed to both the cross country and track team. Alongside Miles Batty, Ward accomplished more in three seasons than most track athletes do with four full years.

Since he could no longer run cross country for BYU in the fall of 2013, Ward trained instead for his first marathon. He completed the Chicago Marathon in an impressive two hours and sixteen minutes and knew immediately after that he could do even better.

As his former cross country teammates prepared for the 2013 NCAA national championships, Ward received a surprising call. It was the NCAA, and they had reversed their ruling. The BYU compliance office and a local sports reporter had revived Jared’s case based on how the NCAA handled another athlete’s situation at Colgate University.

So just one day before the regional meet to qualify for nationals, Ward was back on the cross country team. Two weeks later he found himself on the national podium with teammates he thought he would never run cross country with again.

Since he had been training for a marathon, Ward didn’t feel he performed the best that he could have. Still, he finished 2nd for BYU and 36th overall.

“I may have lost out there, but I gained the experience of running a marathon, which I think has paid off in dividends now,” Ward said.

This school year, Ward resumed marathon training while also chasing a graduate degree in statistics. Just four weeks ago, Ward shaved a couple of minutes off his marathon time with a two hour, 12 minute and 55 second finish in an unusually hot L.A. Marathon.

“Starting about mile 20 it was make it to the next water station and keep praying and wait on that second wind,” Ward said following the win.

That performance in Los Angeles made Ward the U.S. Marathon Champion. The time also qualifies him for the 2016 Olympic Trials.

BYU coach Ed Eyestone told Doug Robinson of the Deseret News that this win makes Ward a “solid contender” for making the Olympic team next year. Ward would rather not think too far ahead, preferring to enjoy the win and focus on the next race.

Don’t be fooled – there’s a lot more to Ward than just running. He is a happy father and husband, and is about to graduate from BYU with a master’s degree in statistics.

However, Ward is the first to admit it all comes back to the track. Ward met his wife Erica on the track team at Davis High School. When their first son, Paul, was born, they went straight to the track for Ward’s workout before returning home for the first time. Ward flew home early from a track meet to meet his second child, Ellie.

“Paul cheers his little ‘whoo hoo!!’ and claps hard for his dad,” she said. “Ellie is just starting to bounce up and down as he gets closer and she claps.”

As for academia, Ward’s master’s program didn’t get far from the track, either. Ward chose to focus his master’s thesis on the optimal pace strategy in the marathon. Ward says he has enjoyed studying the marathon from both the “nerdy side” and the “athlete side.” Ward shared that his two most valuable lessons were 1) take advantage of the downhill sections, and 2) learn to pace yourself like the experienced guys while you’re young.

After graduating this month, Ward will pursue a career in running while training in Provo for the Olympic trials. He recently accepted a sponsorship with international running brand Saucony. He’s also looking forward to spending time with his two children. Ward will continue to train under Coach Eyestone.

“I can’t let go of BYU,” said Ward. “I’m not ready.” Ward explained he was especially grateful for the environment at BYU, which provided him the opportunity to focus on what’s most important in life.

“I can come sit down at BYU with Coach Eyestone and say, ‘I don’t want to train on Sunday,’” said Ward. “And he says, ‘Cool. I didn’t train on Sunday.’ It’s important to him too.”

Ward said he will miss not only his athletic peers, but his academic ones, too.

“I would definitely say that BYU is something that went through me, and I’ll never be the same because of my experience here, both academically and athletically, it really has been rich,” said Ward. “I hope to take that with me.”