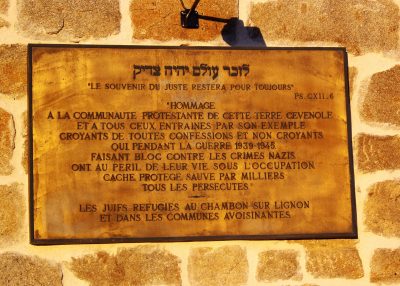 During World War II, numerous French villages protected thousands of Jews from the Nazi extermination programs. Pierre Sauvage’s documentary, Weapons of the Spirit, reviews the rescue of Jews by the residents of one of those villages: Le Chambon-sur-Lignon.[1] To praise Le Chambon and other villages for their altruistic and at times actual self-sacrifice on behalf of strangers does not mean everyone in those villages was immersed in the rescue work. Near the end of the film, a resident of the village is quoted as follows:

People are fundamentally good, with the possibility to become fundamentally bad —and there’s a choice.  It doesn’t mean that bad people are all bad or good people are all good.  It doesn’t mean that in Le Chambon there are no people without faults and failings.  It is a community like any other community . . . and the people who seem very ordinary  . . . can, if given the opportunity, do great things.

Such an insightful observation might be confusing to those watching our public media dialogue—especially regarding the competing rabble-rousing and accusatory political commentaries in print and on television. Almost nowhere in the smug affirmations and cacophony of being “always right all the time” commentary (typically linked with the conviction the other side is “always wrong all the time”) is it granted that all people might be afflicted with faults and failings and no political position is without flaws.

But it is not just the content of commentaries that exclude any admission of error or that acknowledge the other side might have strengths as well as weaknesses that is problematic. It is the uncompassionate spirit of their presentations that poisons whatever the logical value of their espoused content. Each side only speaks to the audience that already agrees with them. Thus, why try to be rational in an argument at all?

Each side often makes generalizations about the other to illustrate how the position of the other side is completely indefensible. The players in this push and push-back exchanges would likely not only disagree with Leslie Maber of Le Chambon but be mystified by her point of view.

Even the current awakening outcry against sexual exploitation (after decades of public dialogue having ignored such behavior), seems often to focus selectively on the sins of the opposition’s public figures, rather than condemning the behavior outright.    The cost to women has been particularly egregious. They become victims in settings where no other witnesses are available to rescue or verify. When the situation is ” he said, she said”, the accuser has nobody to corroborate, and the accused has no avenue to prove guilt or innocence. Of course, if the perpetrator had means of economic, social or other public power over the abused, and there are no witnesses to assist the one exploited, no wonder silence became such a common option for the person exploited.

Unfortunately, some public (television) commentary seems to be oblivious to one way of avoiding either exploitation or accusation. A public figure is mocked for declaring he will not go to lunch alone with a woman who is not his wife, thus avoiding the very appearance of impropriety. Is this criticism only from those who consider themselves opponents of the man being mocked? Were he on “their side,” would he be subjected to the same ridicule?

Perhaps a few starting points for transforming the spirit of public commentary are both possible and realistic.  A consequence would be to redeem public dialogue to focus on actual philosophy and policy matters—both theory and practice—and to abandon ad hominem attacks that only nourish hostility and lack of compassion. Perhaps the move towards honest debate and rational argument would be to do two simple things.

First, abandon the practice of making generalizations about the other side. Making generalizations assumes all in the category of people being described are exactly alike. Pick your category: Whites, Blacks, Democrats, Republicans, Men, Women, Catholics, Evangelicals, Millennials, Baby Boomers, Football players, Soccer players, Nebraskans, Californians, Racists, Southerners.  But in a world that touts diversity of all kinds, it is ironic that we often make generalizations that obliterate the kinds of differences that could enhance the quality of life in any community.

These two plausible alternatives are also found in Leslie Maber’s observation: “People are fundamentally good, with the possibility of becoming fundamentally bad.  –and there’s a choice.” Without granting that, personal responsibility is neither plausible nor realistic. And our harshness and self-justification will continue in our commentaries.

If we think others are wrong—and figuratively spit on them for it—we will have become like the people we are criticizing. We may rejoice with those who sustain our point of view but we must humbly sorrow for, rather than haughtily condemn, those who disagree with us. Otherwise, our political dialogue, our governance, and ourselves will suffer in a destructive cultural pattern we helped to create and maintain and which will not be redeemed.

[1] Because of Sauvage’s documentary, and through Philip Hallie’s book, Lest Innocent Blood Be Shed (1979), Le Chambon is sometimes seen as the only village to make sacrifices in behalf of preserving the lives of Jews. But more than one village engaged in such rescuing and hiding operations. Caroline Moorehead’s book, Village of Secrets (2014), acknowledges some of these additional villages while also addressing a debate regarding some in Le Chambon who were not as altruistic as the village as a whole is advertised.