Real People in a Real Place: How the Book of Mormon Comes Alive at Nephi’s Bountiful | Meridian Magazine 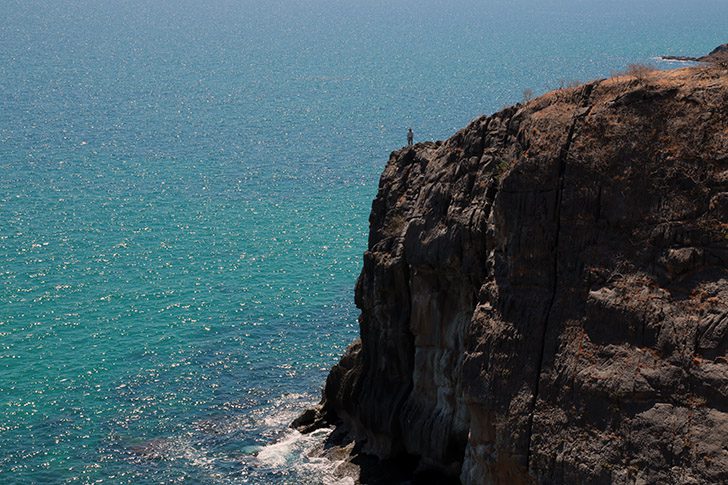 Real People in a Real Place: How the Book of Mormon Comes Alive at Nephi’s Bountiful

Khor Kharfot is the best candidate for Nephi’s Bountiful because it is the only candidate along the Arabian shore, directly east of Nahom, which fits all 12 criteria Nephi describes for the place he built the ship. The sanctuary site there sits like a signature upon the ground, a thumbprint left behind that seems to correlate with the Temple of Solomon in its sacred dimensions. Yet, something more intrigues us—and that is how it fits with the Book of Mormon itself.  To help with private donations in this ongoing effort at Khor Kharfot, please click here.

We walk gingerly, watching every step, as we come to the edge of a cliff that plunges over 100 feet to the rocks in the Arabian Sea below. We look not far back at the sanctuary site with its slab of a rock that once flowed with water. It is also on this height above the water.

Suddenly, the events described in 1 Nephi 17 fit together in a way we’d never seen them before—and probably couldn’t have seen—unless we were right here at the best candidate for Nephi’s Bountiful.

We know well that scene of impending danger for Nephi when Laman and Lemual are so infuriated they seek to throw him into the depths of the sea (1 Nephi 27:48).

Where does that threat happen? On a beach where they are building a ship? You don’t throw someone into the depths of the sea from a beach. You throw them from a cliff, a cliff that’s so high that death is certain.

They are somewhere on a precipice near the sea when this happens. Events have come to a head. Laman and Lemuel refuse to work on the ship and tell him that it is impossible. “We knew that ye could not construct a ship, for we knew that ye were lacking in judgment; wherefore, thou canst not accomplish so great a work” (1 Nephi 17:19)

Nephi is ready to encourage them in the way he often has—by reminding them of the miracles God wrought for the Children of Israel who were also on a wilderness journey. This continues a theme that is constant for Nephi—that they are re-enacting the same kind of wilderness journey, and God will be their light in the wilderness. God will work miracles for them, too.

Nephi mentions that the Lord parted the Red Sea, he fed them on manna, and “ye also know that Moses, by his word according to the power of God which was in him, smote the rock, and there came forth water, that the children of Israel might quench their thirst” (1 Nephi 17:29).

This event in sacred history speaks to him. He will refer again to this rock, gushing with water, later in his life when he says that the Lord God gave Moses “power that he should smite the rock and the water should come forth (2 Nephi 25:20).

Nephi’s pleas, among them invoking Moses and the rock, are followed by Laman and Lemuel’s threats. The proposed sanctuary with its rock that flows with water is the next to the cliffs where one could be pushed into the sea. The juxtaposition is striking—particularly when you see this proximity on site.

It is as if 1 Nephi 17 comes alive that in every way makes sense with the surroundings.

You can see that well in this video.

This proposed sanctuary site works with the context of the Book of Mormon in another way as well. If Lehi and Sariah’s family lived near their sanctuary, they would have dwelled in a higher place, a small hike from the beach, where the ocean currents provide a cooling breeze.

This may make sense with something else Nephi says, Four times he tells us in 1 Nephi 18 that they are going “down into the ship”. It is a curious idea that makes more sense if they coming down from an elevation to pack the ship.

Any proposition with its evidence has to make sense within the context of the Book of Mormon—or even better—make even more sense of the recorded events, references and language. These are real people and real events that happened at a real place in a real time. This possible sanctuary site at Khor Kharfot does just that.

you guys have been digging for two months now. what have you found?

I love the fact that I can see pictures of the site and read about the discovery. I only have one problem with this article. When I was looking up the scriptures in this article it said 1 Nephi 27:48. I was quite confused because I didn't realize there was a chapter 27. I had to go back and figure out it was chapter 27 and not 17. I thought there were several new chapters added and I had no clue.