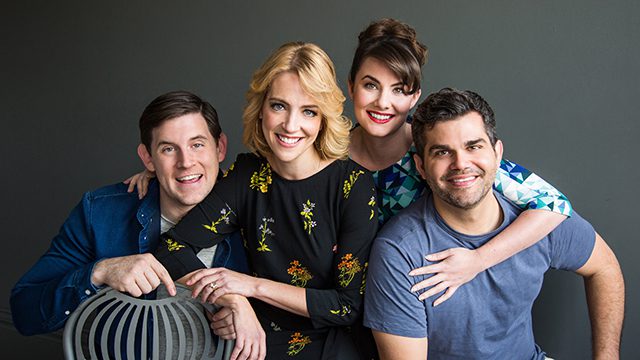 Random Acts: A TV Show that Highlights Kindness with a Hidden Camera

BYUtv is doing something novel with its all-new, unscripted, half-hour hidden-camera show, Random Acts which debuts Monday, April 4th at 8:30p.m MT (repeat at 11:30p.m. MT). In an era often focused on catching people at their worst moments, this refreshing new reality show highlights the altruistic nature of human beings.

In fact, host Will Rubio, who is known for bringing positive entertainment through his comedic YouTube channel, was in two television pilots at once. One was NBC’s Balls of Steel where basically the idea was to ruin people’s day by creating annoying irritations for them and the other was Random Acts where the premise was making people’s day by random acts of kindness.

A bigger contrast there couldn’t have been and the NBC pilot didn’t make it. Will was glad to choose Random Acts with its take on the world that is so positive.

In the pilot, for instance, two actors play a young newlywed couple on the beach searching for her lost wedding ring. The hidden camera catches all the many who stop to help and their genuine concern for the distressed couple.

In another segment, people, like a young Mom handling many small children, are stopped to take a survey at the grocery store about what they are buying today. While they talk to the survey taker, the groceries they want are quickly assembled at the store for them and the cartload is free. Of course, joy and sometimes, even tears, follow.

Rubio said that this is a hidden camera show with a positive twist. “My job is to make people feel happy,” he said, and that’s a pretty sweet gig. Filming it has been an incredibly positive experience and legitimately touched the lives of a lot of people.”

The show is made of some longer form good deeds and shorter ones pieced together. Rubio especially got a kick out of the complimenting garbage can. He said, “You throw something away, and the can says, ‘That’s a nice blouse.’” At first they had a hard time hiding the camera for that segment, but he finally learned that if he climbed up into a tree about 20 feet, no one saw him, and the ‘garbage can’ could compliment those who stopped without his being detected. “People don’t think to look up,” he said.

He also liked a segment shot at Christmas for a family whose child at spent the holiday in the hospital. While the family was away, the Random Acts tem came into their home, which was decidedly not ready for the holiday and created a little Christmas decorating magic. When the family returned, a choir of Christmas carolers met them at the door and they went into a home completely transformed with decorations for the holiday.

Initially 10 episodes have been filmed all built around the idea of doing something for somebody that normally wouldn’t get done. The creative team brainstorm with many for the people and good deeds they will do. At some point as the show progresses they will take ideas from the public, so the show will stay fresh.

In addition, the hosts seek out unknowing citizens putting them in a position where they have the opportunity to complete an act of kindness. In addition to Will Rubio, others featured on the show are actresses Emilie Starr and Lisa Valentine Clark and comedian Aaron Woodall.

“When we began producing original content for BYUtv, we set out to create entertaining programming that showed ‘the good in the world,’” says Derek Marquis, managing director of BYUtv and executive producer of Random Acts. “We are constantly bombarded with tragedies, violent crimes and catastrophes that most often show humankind at its worst. Through Random Acts, we seek out and incite kindness and are investing in counterintuitive encounters of giving that inspire.”

BYUtv commissioned award-winning Salt Lake City-based production house Cosmic Pictures to produce the series. Founded by Director/DP Greg Kiefer, Cosmic Pictures has worked internationally in over 75 countries and across the whole breadth of the communications industry – from feature film and commercials production to television and corporate communication projects.

BYUtv’s original programming slate includes the critically-acclaimed drama series Granite Flats, which featured guest stars Christopher Lloyd, Parker Posey, Cary Elwes and George Newbern; the long-running sketch comedy series Studio C, which has an extraordinary following of over 650,000 subscribers on YouTube; and the latest addition to its roster, Relative Race, the first family-history based competitive reality show that follows four couples as they meet relatives linked by DNA for the first time in a race across the States. BYUtv is available in every state of the country via cable, satellite and multiple digital media platforms including byutv.org and on all of BYUtv’s digital platforms, including Roku, Xbox360, Amazon FireTV, iOS and Android.

How do I volunteer time to help random acts of kindness?