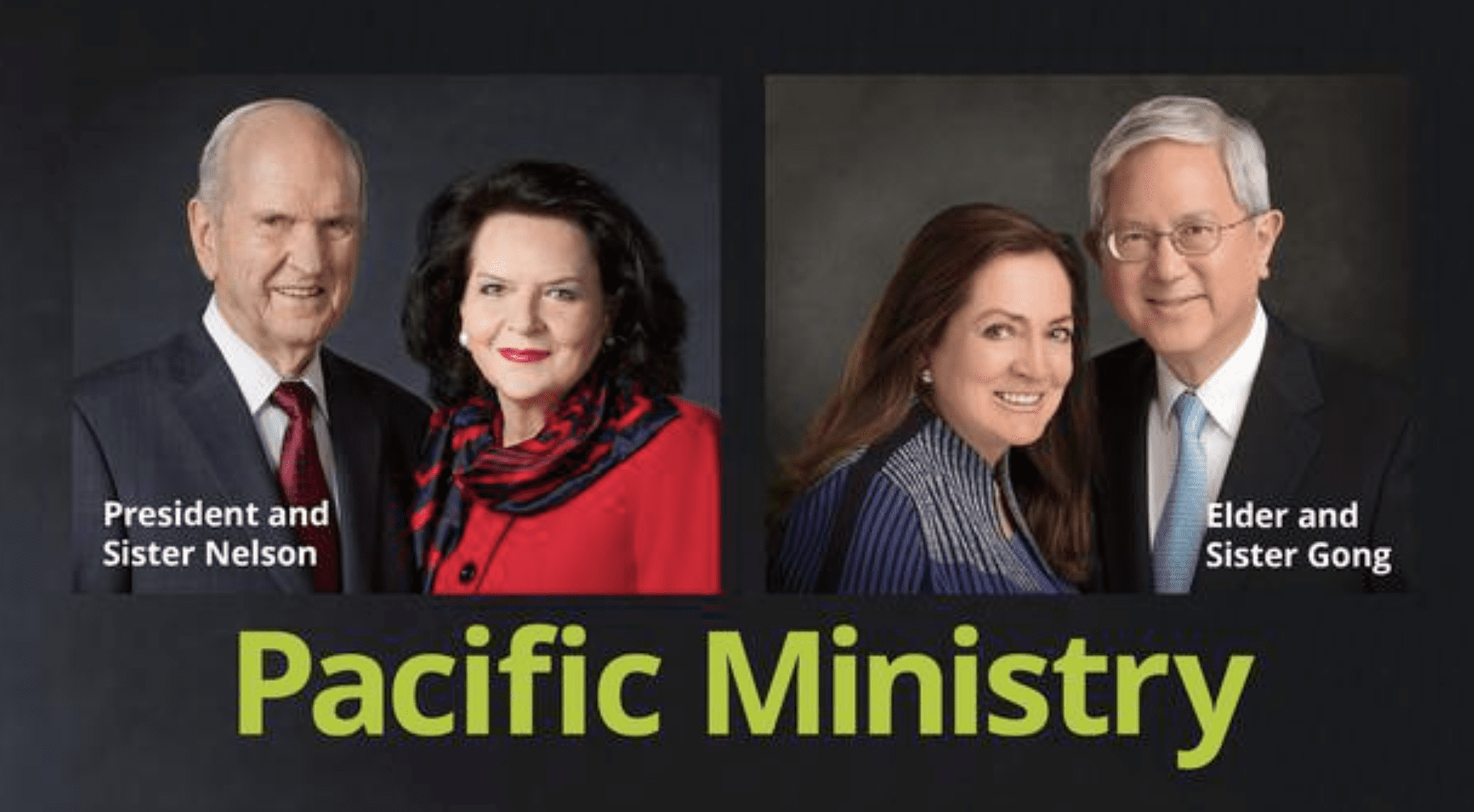 President Russell M. Nelson of The Church of Jesus Christ of Latter-day Saints and his wife, Wendy, along with Elder Gerrit W. Gong of the Quorum of the Twelve Apostles and his wife, Susan, will leave in mid-May on a ministry visit to seven destinations in the Pacific. The global faith leaders will leave Salt Lake City on Thursday, May 16, 2019, and return Saturday, May 25. They will minister to Latter-day Saints and friends of the Church during the nine-day trip, including missionaries and government and religious leaders.

There are 16.3 million Latter-day Saints around the world, including nearly 583,000 members in the Pacific. Four men were sent to be missionaries in the islands of the Pacific in May 1843, just 13 years after the Church was organized in the United States. They followed the first missionary in the South Pacific region, Englishman William Barratt, who arrived in Adelaide, Australia, in 1840. Today, missionaries serve in 18 missions in the area.

The geographic region, known as Oceania, is home to 10 operating temples, and four new temples were recently announced in American Samoa, Tonga, Guam and New Zealand.

The senior Church leaders will make a brief stop on the Big Island of Hawaii. An evening devotional for members and guests will be held at the Kona Hawaii Stake Center. It will be broadcast to Latter-day Saints in Hilo.

More than 74,000 members of the Church live in Hawaii. The Church has two temples in the state, located in Kona and Laie on the island of Oahu.

Thousands are expected to attend a two-hour evening devotional that will be broadcast to all Samoaand American Samoa congregations, about 41% of the population.

The Church has a temple in Apia and another has been announced in Pago Pago, American Samoa.

The leaders will travel to Australia where President Nelson and Elder Gong will address members in a two-hour devotional to be broadcast from the International Convention Centre Sydney in picturesque Darling Harbour to all congregations in Australia.

There are currently five operating temples in Australia, located in the cities of Adelaide, Brisbane, Melbourne, Perth and Sydney.

The Nelsons and Gongs will arrive in New Zealand.

The Hamilton New Zealand Temple is currently closed for renovation. A new temple has been announced in Auckland.

In the evening, all congregations in Fiji will hear from the prophet during a broadcast devotional in Suva.

In the evening, several thousand Latter-day Saints will attend a devotional that will be broadcast to all congregations in Tonga.

Tonga is the most densely populated country of Latter-day Saints in the world. About 65,000 members live in Tonga, which is about 60% of the country’s population. The Nuku’alofa Tonga Temple was dedicated in 1983. A second temple will be built in Neiafu.

On the same date, the Church delegation will cross the international dateline and arrive in Papeete, Tahiti.

President Nelson, Elder Gong and their wives will attend a 175th anniversary cultural program celebrating the arrival of the first missionaries to French Polynesia in the evening before speaking at a devotional that will be broadcast to all Tahiti congregations.

The Papeete Tahiti Temple was first dedicated in 1983 and rededicated in 2006 following remodeling.

Newsroom will provide full coverage of the Pacific ministry, including video and photos for the media and the public, of these historic events.