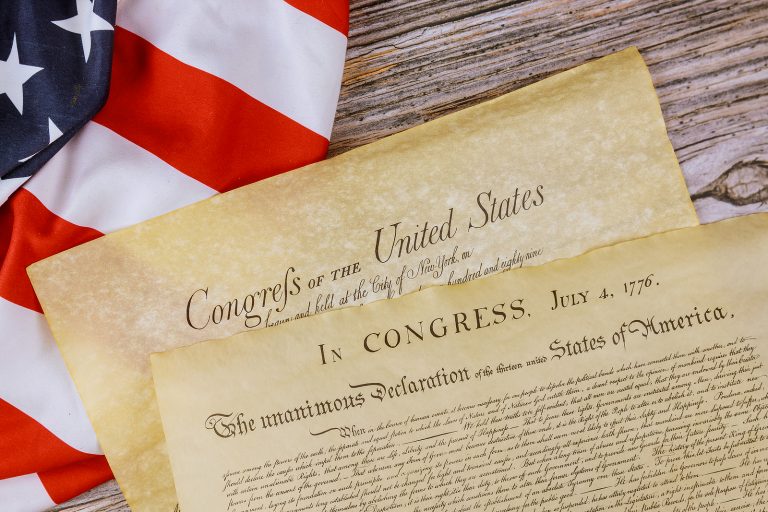 Praying for the Constitution of the United States, as Amended

Do you pray for the Constitution of the United States, and for those who are sworn to defend and protect it?  If not, this is a good month to begin.  It was 233 years ago, on the 17th of September in – as the document itself says – “the year of our Lord one thousand seven hundred and eighty-seven” that the Constitution was signed in Philadelphia.

I don’t know if the Constitution is hanging by a thread – but has anybody ever used the metaphor of a tether ball?  The cord may be strong enough, not threadbare, but the precious legacy at the whip-end of the rope is being batted back and forth with closed fists.

It is wrong to believe that a tether ball can never be punctured.  The storage rooms of America’s public schools are littered with the carcasses of broken tether balls.  They can be replaced, but not repaired – tether balls, I mean.

As we know, the Constitution of the United States did not abolish slavery.  (What it did do about slavery is a subject worthy of many books, and many have been written.)  The Convention was warned about slavery, though, by a secular prophet:

On August 22, 1787, George Mason of Virginia delivered a dire foretelling about nations that traffic in human beings.  Slaves, he said, “bring the judgment of heaven on a country.  As nations cannot be rewarded or punished in the next world, they must be in this.  By an inevitable chain of causes and effects, Providence punishes national sins by national calamities.”

The man who uttered those words was one of this country’s most influential founders, and one of its most forgotten.  He attended the constitutional convention, but did not sign the document, in part because it did not contain a statement of individual rights.  He was responsible in large measure for adding to the original Constitution the amendments we now call the Bill of Rights.  His work laid the foundations for Jefferson’s Declaration of Independence.

This same George Mason, who might fairly be called an apostle of liberty, was, himself, a slave owner.

In America today our necessary debates about race, discrimination, and equality cannot be resolved by appealing to the original Constitution of 1787, which is not particularly relevant (except, in some minds, as a horrible example of law-making).  Far more relevant now is the second constitutional “convention” that produced the 13th, 14th, and 15th Amendments.  The debates in prelude to those amendments were conducted, not by statesmen in hallowed halls but by soldiers on America’s own rolling fields, using, not words, reason, and history, but shrapnel charges and musket balls.  George Mason had warned us.

Also, highly relevant in today’s debates are the Federal anti-discrimination laws of the mid-20th Century and some 70 years of court decisions (going back especially to Brown v. Board of Education in 1954).

At one time, enlightened opinion in this country sought to create a “color-blind” society.  This term came, I suppose, from Justice John Marshall Harlan’s dissenting opinion in Plessy v. Ferguson, an 1896 decision in which the U.S. Supreme Court allowed a state to segregate blacks and whites on public conveyances.  In lone dissent, Justice Harlan wrote:

“[I]n the view of the Constitution, in the eye of the law, there is in this country no superior, dominant, ruling class of citizens.  There is no caste here.  Our Constitution is color-blind and neither knows nor tolerates classes among citizens.  In respect of civil rights, all citizens are equal before the law.  The humblest is the peer of the most powerful.  The law regards man as man and takes no account of his surroundings or of his color when his civil rights as guaranteed by the supreme law of the land are involved.”

We are now involved in a great national debate that may decide whether this country is still dedicated, ideally, to a color-blind society.  (We have always fallen short of the ideal.)  For example, in the race for the presidency, only one of the major-party candidates and his supporters still endorse color-blindness.  The other candidate, and his supporters, prefer a policy of racial inclusiveness predicated on an emphatic consciousness of skin-color.  Both sides believe the other side is racist.

The struggle to define “equality” in America continues.  Many wonder – and I am one of them – if the very idea of America is at stake.

Do not suppose, though, that you know who I might be voting for.

Reading for Extra Credit.  Many members of the Church of Jesus Christ of Latter-day Saints believe, on good scriptural authority, that the Constitution of the United States is divinely inspired.  Elder Dallin Oaks who, in addition to his ethical credentials is a first-rate, A-plus lawyer, wrote an article on the meaning of “divinely inspired” that ought to be required reading in every Latter-day Saint home in the United States.  The article can be found in the February 1992 Ensign.

Mission Statements of the United States of America - Words to live by. We hold these truths to be self-evident, that all men are created equal, that they are endowed by their Creator with certain unalienable Rights that among these are Life, Liberty and the pursuit of Happiness. Declaration of Independence 1776 We the People of the United States, in Order to form a more perfect Union, establish Justice, insure domestic Tranquility, provide for the common defense, promote the general Welfare, and secure the Blessings of Liberty to ourselves and our Posterity, do ordain and establish this Constitution for the United States of America. Constitution of the USA 1789